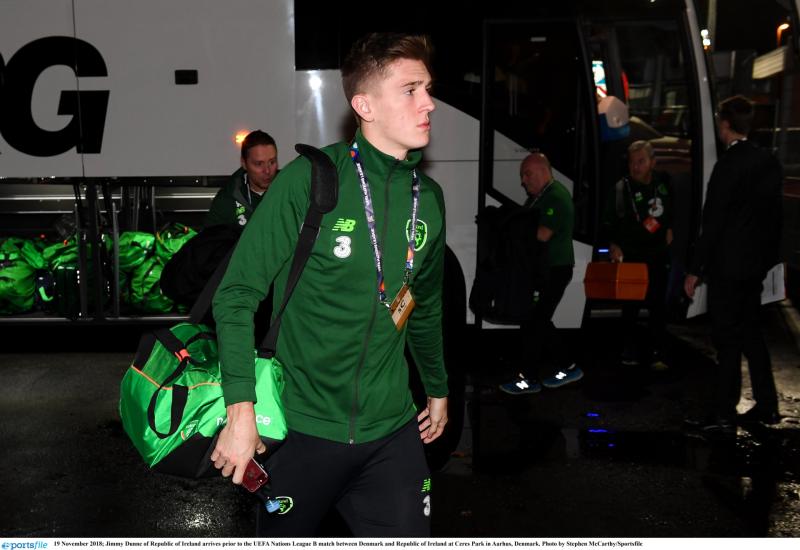 Jimmy Dunne prior to Ireland's clash with Denmark back in 2018. (Pic: Sportsfile)

Dundalk's Jimmy Dunne has been drafted into the Irish International squad ahead of the upcoming friendlies against Belgium and Lithuania at the Aviva Stadium. The 24 year old was called into the squad by manager Stephen Kenny following the loss of Darragh Lenihan to injury.

The defender has been a mainstay in the championship this season, ripping it up as a part of a Queens Park Rangers side that is chasing promotion back to the Premier League. They are currently just two points outside the Play Off places in eight place.

The Blackrock native moved to the London based club in the Summer of 2021, having been on the books of Burnley since 2017. However he only made three appearances for the Clarets and spent most of his time on loan to clubs such as Sunderland, Hearts and Accrington Stanley.

The move has proved to be fruitful for Dunne, who has made 32 appearances this season, the vast majority coming as part of the starting 11. He also proven capable of notching the odd goal, having bagged three so far this year against Blackpool, Reading and Preston.

Given his current form, many felt he was unlucky to have not made the final squad having been named as part of the provisional and larger panel announced by Kenny. In the end he was not named,  but following the injury to Lenihan he has now joined up with the Irish squad, reporting for duty yesterday.

So far the Wee County player has notched up two international caps for the U21 side and has was also drafted into the Senior setup prior to a Nations League encounter with Denmark back in 2019. He is yet to make his debut for the Senior side.

But if he keeps up his form with QPR and shows his stuff during the next couple of days of training, maybe Louth will finally have another regular in the Green jersey. It has been a long time since Steve Staunton filled that quota in the 90's and early 2000's. Only time will tell what level Dunne can rise too.