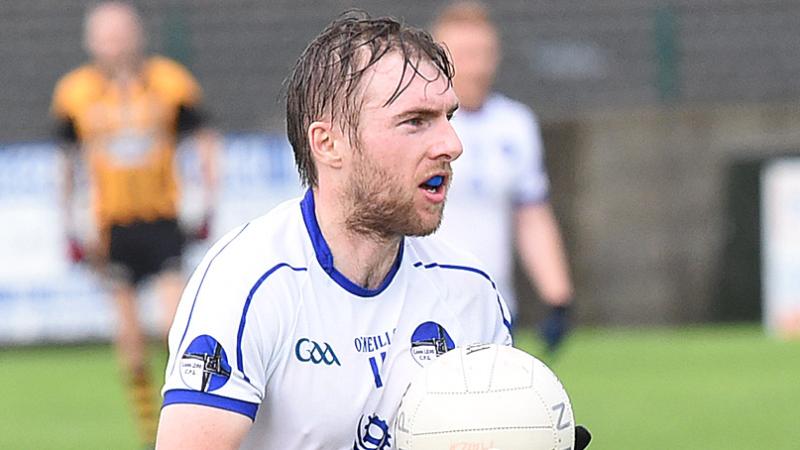 Colin Murphy was in fine form as he hit 1-6 in LannLeire's victory over Dowdallshill. (Pic: Arthur Kinahan)

Lannléire made their way out of Group A of the Kevin Mullen Shield with a three-point win over gutsy Dowdallshill at St Brigid’s Park.

Two goals in the final quarter would be enough for the Dunleer men to take victory on the morning and a passage through to the quarters thanks to score difference.

A late Niall McManus goal made it a nervy finish for Glen O'Reilly's side as McManus would finish the game as top scorer. At the other end Colin Murphy netted, while substitute Jack Kearney popped up with the winner with five minutes remaining.

St Nicholas earned a hard fought victory in the final round of the group stages in the Kevin Mullen Shield.

A rain-soaked Pentony Park made it difficult for free-flowing football with both teams struggling early to get any scores on the board. Halfway through the half the deadlock was broken by a free kick and a point from play for the visitors.

Trailing by two the Nicks forward line began to find space, a Lee Kavanagh free and a fine individual score from Tadgh Martin had the home side level. A late Kavanagh point from play had the Nicks leading by the minimum going into the break, 0-3 to 0-2.

With conditions underfoot deteriorating, both teams were trying to work possession football. The Nicks showed great patience early on working scores for Sam Reilly and another Kavanagh free to extend their lead.

Na Piarsaigh fought back with two from play but couldn’t find the score to level proceedings. Another Reilly and Kavanagh point kept the Nicks in front, a lead they would never give up. A late red card for the visitors allowed the Nicks to see out a fine win in difficult conditions.

Glyde Rangers made it three wins from three in Group B of the Kevin Mullen Shield thanks to this win over Westerns at Reaghstown on Sunday.

Alan Kirk was top scorer for the winners as he landed seven points over the hour in what proved to be a very comfortable victory for the Tallanstown side.

The visitors took control of the game from the early stages and by the interval they were well on their way to victory as they established a 0-8 to 0-0 advantage.

The second half followed a similar pattern as Glyde continued to keep the scoreboard moving, while the Westerns did get off the mark through Terence Sweeney.

Naomh Malachi made it two wins from two with a one-point victory over Annaghminnon Rovers on Sunday as they topped Group C of the Kevin Mullen Shield.

The Courtbane side looked to be in firm control at the break but they had to withstand a determined comeback from Rovers before claiming the victory.

Ronan Greene and Jamie Kelly both found the net in the opening half as the visitors eased into a 2-5 to 0-4 lead at the short whistle.

Annaghminnon came storming back and a goal from James O’Connor along with points from Rory Phelan and Dwayne Markey got them right back into contention. However, they were unable to complete the comeback and the Mals held out for a narrow win.

Darren Weldon struck a late goal to hand Wolfe Tones their first win of the season and deny Sean McDermotts at Mountrush on Sunday.

Both sides had lost their opening fixture to Glen Emmets but despite there being little at stake, it proved to be an entertaining encounter in Group D.

Jordan Duffy was in good scoring form for the Tones as his side led by 0-7 to 0-5 at the break, with BJ Mathews on target for the Seans during the opening period.

There was little to choose between the teams in the second half with Duffy hitting the net for the Drogheda men. Goals from Declan Carroll and Emmet Duffy looked to have been enough to give the Seans victory but Weldon’s late goal stole it for the Tones.