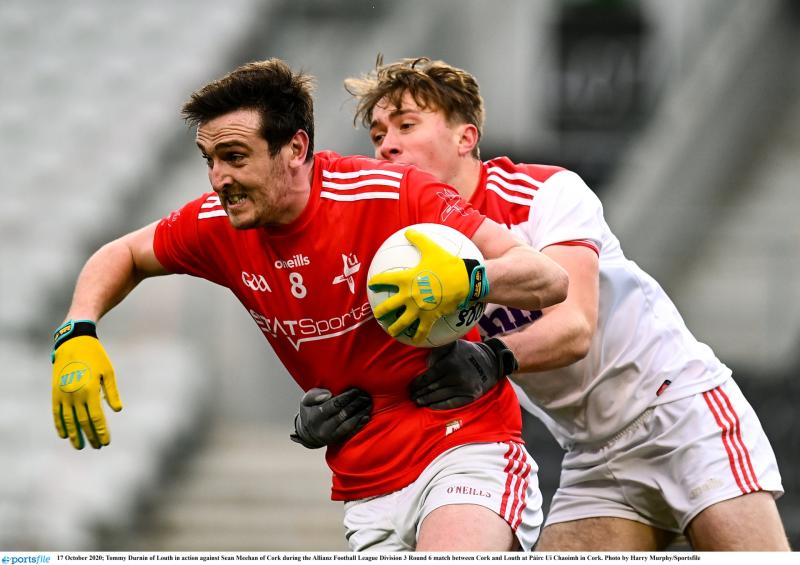 The game is really all about winning. If our team is beaten, we complain about the type of football they played, but even if the football’s the same but the result different, well, we don’t seem to notice it, or if we do, we keep our mouths shut.

Louth senior footballers, and, indeed, Longford, their opponents, got stick after their National League second round match a number of Sundays back. The conditions weren’t good, but most commented about afterwards was more the fare both served up rather than the weather.

It ended in a draw and that was about as fair as it could have been, because neither deserved a win. This page was among the loudest noise-makers.

Louth were better in the following round, coming from well off the pace to beat Limerick, and there was a further improvement at Ardee last Sunday week, another strong finish enough to secure a second brace of points and further boost the team’s promotion hopes.

There was a good feeling at Pairc Mhuire. Whenever the fifteen red jerseys were in their own half – and behind the 45-metre line on one occasion – there wasn’t a squeak of complaint on the banks.

In fact, this mass defending may not even have been noticed. Nor was there adverse comment when the ball was played across the field a number of times, as had happened quite often in the Longford game.

But you can imagine what it would have been like had Louth been chasing the game, maybe five or six points in arrears and not playing well. It would only have taken a few back passes for the hackles to be risen, the onlooking objectors giving vent to their feelings. “Will you get the ball up the field.”

One thing Mickey Harte is, and that’s his own man. He has belief in his own methods, and when you consider how his CV is decorated – six All-Irelands over three grades and more Ulster titles than you could shake a stick at – you’re on the back leg when you try to pick holes in how he goes about things, especially how his team plays.

Harte can’t, however, make sugar out of shallots (a different word is used by the more vulgar). It’s with only the cards he’s dealt that he can play and plan, and there would be no comparison between this Louth team and any of his three All-Ireland-winning Tyrone seniors.

But it’s getting better at Darver on training nights; and what appeared for a while to be a doomed campaign has produced a couple of decent results in recent weeks to give hope of a rise in grades.

While there are those who contend another season in Division Three might be better than getting among those just below the league’s elite, if you were to conduct a supporters’ poll, they’d want their team to be as close to the top as possible in the early part of the year. It could only improve championship prospects.

Harte takes his team to Enniskillen on Saturday to meet Fermanagh. There shouldn’t be too many changes to the starting fifteen from the last day, when the manager chucked off Tommy Durnin from a struggling midfield, only to send him back out about ten minutes later.

It was a move that contributed handsomely to a winning last quarter. Has there been a taller centre field duo than Durnin and Oliver Plunkets’ Conor Early? They can play a bit of football as well as reach higher than most of their opponents, and Durnin, now trading his club wares in Inniskeen, can take a score.

And on the point of midfielders: should there not be another tree-topper in the panel, Naomh Mairtin’s Wayne Campbell? Just asking, as the fella says.

Bevan Duffy, the most versatile of any who’ve been around for the past few years, having played in several central roles, put a poor first-half performance against Westmeath behind him to look more than comfortable at full-back.

And Niall Sharkey, following in the footsteps of another Glyde Rangers player of a number of years back, Gerry Sheridan, wears the No 6 jersey well.

Conor Grimes is always expected to do some defending along with the other forwards – that’s part of the Harte strategy – but hassling a full-back, getting out to the ball in front and above all, using his strength, is what the Glen Emmets player does best.

With Ciaran Byrne alongside him, hopefully, the Erne defence won’t have it easy. But can there be any mention of the Louth attack without shining a light on Sam Mulroy?

Ok, so many of the Naomh Mairtin clubman’s scores at county and local levels comes from placed-kicks – close-in, long-distance, 45s, penalties, the lot – but he often creates many of them himself, and is good to take his colleagues into play.

When you think of it, how many All-Irelands have been won by a solid place-kicker? Some names:  Galway’s Cyril Dunne, Dublin’s Jimmy Keaveney and Dean Rock, Tony McTague, Offaly, Meath’s Brian Stafford and Down’s greatest-ever, Paddy Doherty.

The records will show these, and others deadly with the dead ball, were enormous contributors to winning tallies as well as winning trophies.

This is a huge game on Saturday and won’t be easily won. When Louth were last at Brewster Park, in 2015, the points were kept at home.

Fermanagh have been in an Ulster Final since, while Louth have only flipped-flopped in the league’s lower reaches, making no impact in the championship, much like so many others in Leinster hidden under that huge Dublin shadow.

There’s a home match with Antrim coming up the week after that, and then in the final round, on March 27, the bus takes off for Aughrim.

This concluding match with Wicklow was expected to see Mickey Harte go head-to-head with one of his predecessors; but in the middle of last week, word came through that Colin Kelly had parted company with the Garden, the third county he’s been associated with since leaving these parts.

It just doesn’t seem to be working out for Kelly, who, in his playing days, was as good as any around at the skill perfected by Doherty and the others mentioned above.