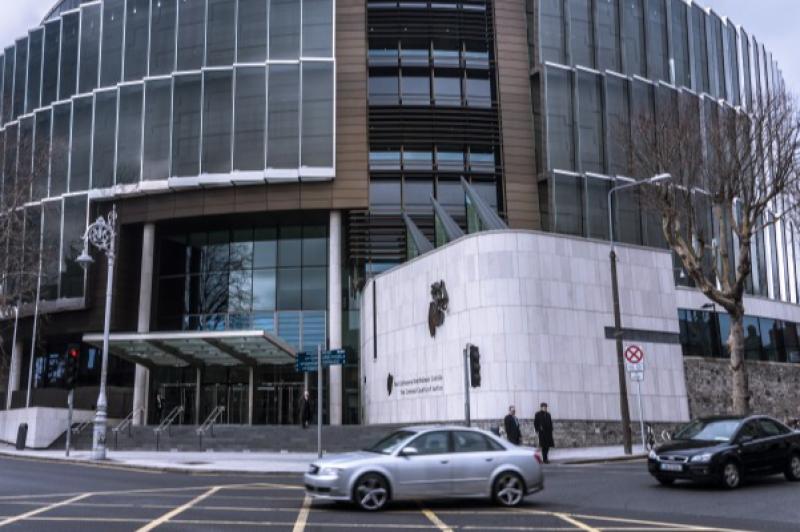 Seventeen testimonials were handed in to the Special Criminal Court today on behalf of a cross-border criminal who was involved with a notorious gang that stole hundreds of thousands of Euro using stolen diggers to pull ATMs from walls.

Three-time All-Ireland Club football winner Daniel O'Callaghan (31) was convicted last month of a number of offences relating to a series of ATM thefts in Meath, Cavan and Monaghan in 2018 and 2019.

At a hearing this morning (FRI) Vincent Heneghan SC for O'Callaghan asked the three-judge court to consider 17 written testimonials from family and friends which counsel said showed O'Callaghan's involvement with his family and local community.

He said that O'Callaghan, who won his All-Ireland medals playing for Crossmaglen Rangers, is no longer involved in sport.

During the brief hearing Detective Garda Jim Matthews told prosecution counsel Fiona Murphy SC that O'Callaghan has previous convictions from Dundalk District Court in 2017 and 2011 for dangerous driving. He was also convicted at Dungannon Magistrates Court in Northern Ireland of common assault and was fined.

She said the court wants to consider the sentences handed down to O'Callaghan's three accomplices who pleaded guilty to the same ATM robberies for which he was convicted after a trial.

They were sentenced to a combined 19 years and six months.

Following a trial O'Callaghan, of Monog Road, Crossmaglen, Co Armagh was found guilty of all 16 counts against him relating to an ATM theft and an attempted ATM theft in Cavan and Monaghan in 2019.

Ms Justice Tara Burns at the three-judge, non-jury court found that O'Callaghan was "intimately involved" in the planning of the thefts, which followed a "modus operandi" that was seen in several other thefts that the court said were carried out by the same gang earlier in 2019 and in late 2018.

The final attempt to steal an ATM was thwarted by gardai who were watching as the gang drove a digger up beside an ATM in Virginia Co Cavan in the early hours on August 14, 2019.

Gardai saw a stolen Toyota Landcruiser in convoy with the digger.

The Landcruiser was pulling a trailer into which the gang intended to place the ATM before taking it to a premises at Tullypole, Moynalty, Co Meath where the money would be removed.

Gardai would later discover more than e438,000 hidden in various locations and buried in the ground at Tullypole.

When gardai rammed the Landcruiser, O'Callaghan and another man ran from it and a third man ran from the digger.

All three jumped over a wall into a field but before they got away a garda from the National Surveillance Unit (NSU) and another garda from the Emergency Response Unit identified O'Callaghan.

She said the identification by the NSU officer was particularly reliable because he had familiarised himself with O'Callaghan over many years as part of his duties in preventing and detecting cross-border crime.

The officer was just a few feet away from O'Callaghan with a clear view when he made the identification, Ms Justice Burns said.

O'Callaghan's DNA was also found in a sauna in a nearby shed after the owner told gardai he suspected an intruder had interfered with the insulation in the shed's attic.

They carried out the thefts early in the morning when there were few people or gardai around.

In each case they used a digger to dig the machine out of the wall in an "efficient and skilled manner".

The gang members were also forensically aware, she said, and occasionally set fire to the vehicles they had used, used "burner" mobile phones and crossed the border with Northern Ireland to escape the attention of gardai.

She said the court accepted the evidence of retired Detective Superintendent Alan Cunningham who gave evidence, based on his professional experience and expertise, of the existence of the criminal organisation.

O'Callaghan had pleaded not guilty to offences under Section 72 and 73 of the Criminal Justice Act.

He was found guilty of the attempted theft of an ATM at the Riverfront Hotel, Main Street, Virginia, Co Cavan on August 14, 2019, for the benefit of, at the direction of, or in association with a criminal organisation.

He is also guilty of the theft of an ATM on Main Street, Castleblayney, Co Monaghan, on  April 3, 2019 for the benefit of, at the direction of, or in association with a criminal organisation.

He was found guilty of two charges of participating or contributing to the possession of cash totalling €125,930 intending to facilitate the commission by a criminal organisation or any of its members of a serious offence at Tullypole, Moynalty, Co Meath, on August 14 and 20, 2019.

He is guilty of possessing €298,000 at the same location on August 14, 2019, along with a charge of possessing a petrol can intending to use it or cause or permit another to use it to damage a stolen Toyota Landcruiser with false plates in Virginia, also on August 14.

In addition, he is guilty of possessing a stolen Toyota Landcruiser, possession of a stolen 14-tonne digger and appropriating a digger without the consent of its owner in Virginia.

Ms Justice Burns said that the court is satisfied beyond a reasonable doubt that O'Callaghan was "at a very minimum" acting in association with a criminal organisation.

It is clear, she said, that he was involved in planning the thefts and that he was associated with the premises at Tullypole where large amounts of cash were seized by gardai.

She said his involvement in the theft at Castleblayney in April 2019 was proven by the presence in the stolen trailer at Virginia of parts of the debris from the earlier theft.

She said the prosecution had also established that he was linked to the premises at Tullypole where the money from the ATM thefts was being stored.

She said that although his presence at Castleblayney could not be established, the various strands of circumstantial evidence gave rise to the "inevitable conclusion that the accused was intimately involved in the workings of the criminal organisation and was involved in a joint enterprise to effect the theft at Castleblayney."