Trip Through Time: A history of law enforcement in Dundalk 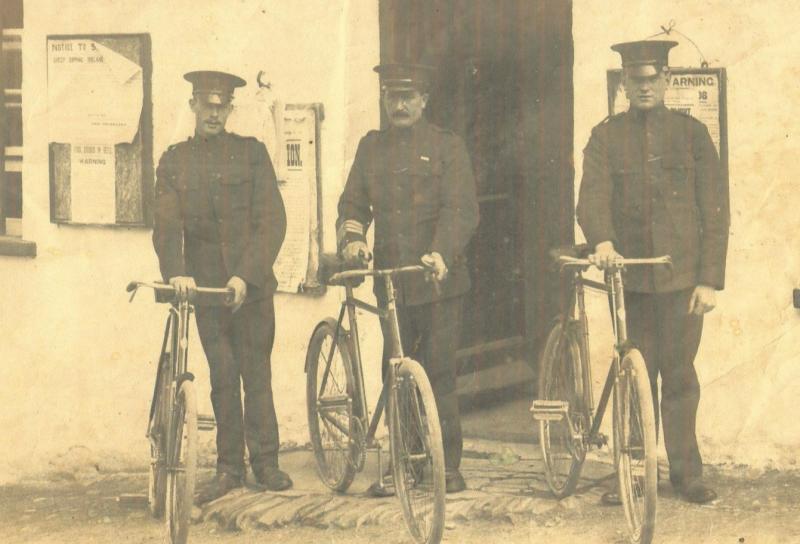 We have been celebrating various events relating to the birth of our nation over the past six years, but one which has been scarcely mentioned and has greatly affected Dundalk over the past 100 years is fast approaching.
That is the arrival of the Civic Guards in Dundalk on November 1, 1922!

I write ‘Civic Guards’ deliberately because that is how ordinary Dundalk people referred to members of An Garda Síochána police force for many years – and some older people still do! The reason is simple, because that is how they were officially known when they first arrived in Dundalk and the name was not changed until after the Free State Government passed An Garda Síochána Act in 1924.

The history of policing Dundalk is long and complicated and I am aware that many honest citizens of the Town treat any policeman on duty with a certain degree of suspicion and that feeling needs to be understood and respected by anybody in authority.

This was only a general feeling, and I developed very good relations with many people over the years who have been involved in something that would bring them under suspicion and I very quickly learned to ‘keep my mouth shut!’, in many circumstances.

In general, however, the people of Dundalk always had a very high regard for most members of An Garda Síochána stationed locally and, indeed, they relied on them for simple things like filling out official forms and getting in touch with relatives who had emigrate during times of trouble and grief!

All this has become even more important at the present time of the COVID-19 lock-down and the Guards are often being called upon to act over and above the ordinary call of duty; especially in looking after the elderly and the infirm!

The earliest form of organised policing in Dundalk seems to have been the establishment of a ‘Night Watch’ in about 1825 by the Corporation that were then in charge of municipal affairs.

This seems to have been an almost ‘laughable’ force composed of elderly and, sometimes, infirm, men who went about the Town during the hours of darkness armed with oil or candle-lit lanterns and long staff.

They also had a wooden rattle with which they could summon their comrades when they came across any suspicious activities.

There were only about a dozen of them at the start and they operated from a small hut at the side of the Market House at the Square.

I suppose, however, that they must have been some sort of comfort to decent citizens asleep in their beds to keep thieves from breaking into their properties!

Sir Robert Peel organised the Irish police force in 1822 as the ‘Constabulary of Ireland’ and enrolled about 6,000 men in the following years.

They did not get the name Royal Irish Constabulary until 1867, during the reign of Queen Victoria.

They first patrolled around Dublin City and do not seem to have reached Dundalk until the 1840s when a police barrack was opened in Clanbrassil Street near the present G.P.O., and later moved to the other end of Clanbrassil Street to premises that was later to become Duffner’s jewellers’ shop.

There was also a police barracks in Crowe Street, opposite the old Jail and Courthouse that was to become the Tempest Building where the Dundalk Democrat had offices for over ten years at the beginning of the present century.

I do not know when this barrack was being used but believe that it must have been mainly for service at the Courthouse.

Shortly after the arrival of the Irish Constabulary in Dundalk, the old Night Watch were abolished by the newly formed Town Commissioners in 1855.

The R.I.C. left Dundalk on March 29, 1922, from their barracks at Bridge Street and Anne Street - they had earlier evacuated a barracks at Quay Street and other at various stations around the rural areas - and members of the I.R.A., took over the Anne Street Barrack.

A voluntary civilian force took over the patrolling of Dundalk streets shortly afterwards.

They wore just armbands to indicate that they were acting as auxiliary police and were unarmed.

The first members of the Irish Civil Guards were enrolled at Ballsbridge, Dublin , on February 21.

1922 and the first Garda Commissioner, Michael Joseph Stains, from Newport, Co. Mayo, was appointed in March but the first Civic Guards did not arrive in Dundalk until after Halloween.

There was a very interesting account published in the Dundalk Democrat on the following Saturday, November 4, which reads - ‘The long expected Civic Guards arrive on Tuesday.

The first thing they did was to remove the elaborate sand-bag barricades and entrenchments from the front of Anne Street barrack which they had taken over from the Military (the Civil War was still raging in the area at the time) and the place no longer looks like a beleaguered outpost in Waziristan.

One result will probably be that the people in Anne Street and Park Street will be allowed to sleep in peace at nights.’

The report goes on to state that - ‘For four months past the Anne Street Barrack has been the obvious target of the ‘Gentle Sniper’ crouched in some clump in the Demesne and the residents around have come to apprehend that there are more sedative things than a sniper’s bullet hopping off the roof at regular intervals between nightfall and 4 am.

The Civic Guard, being an unarmed force, there will be no excuse sniping at their quarters.’

The writer then goes on to make an interesting comment about the new police force.

‘They are big hefty fellows recruited, no doubt, from the farming community, for the most part.

They look as if they could use their fists, not to speak of their truncheons, very effectively.

We wish them the height of luck and bespeak for them the sympathy of every law-abiding citizen.’

An Garda Síochána remained at the Anne Street Barrack, using it as their head-quarters for the District, until they moved to what had been the Governor’s House at the former Dundalk Jail at the Crescent since 1854, which had been renovated at a cost to the State of about £8,000, in January 1946 and have remained there ever since.