RACING: All the tips you need for Thursday's card at Thurles 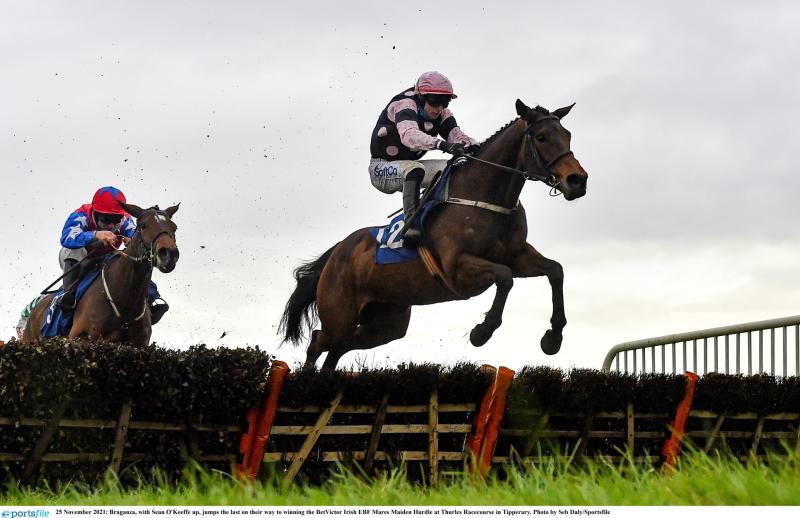 RACING: All the tips you need for Thursday's card at Thurles PIC: SPORTSFILE

88 runners are declared for Thurles’ seven-race National Hunt card on Thursday - which boasts €116,500 in prize-money.

The meeting opener is at 1.55pm, with the final race of the afternoon at 5.20pm - find tips and prices at MyBettingSites.

Soft, is the current going description - with an unsettled forecast, in the build-up to the meeting.

Worth a valuable €30,000, the feature race is the Grade Three Michael Purcell Memorial Novice Hurdle, over an extended two-and-a-half miles and due off at 3.40pm.

A field of six have been declared, including recent course and distance winner, The Little Yank - who won in eye-catching fashion two weeks ago.

The lightly-raced Gatsby Grey won his first two starts comfortably - both on heavy ground - and was just outclassed by the likes of Sir Gerhard in a Grade One at the Dublin Racing Festival, last time. A step back in grade and a step up in trip will both help the six-year-old get back on track.

Berkshire Royal hasn’t been seen since May, but put in an impressive performance that day. This is only his third run since 2018, but he has done it fresh before. Captain Colby was a winner last time, and The Goffer won his maiden over today’s trip. Ferdia makes up the sextet.

Dolcita was mightily impressive when breaking her chase duck at the third time of asking, at Fairyhouse a fortnight ago. She got it all together on the day and a repeat of that will make her very hard to beat. Jeremys Flame got the better of her main rival in races over two miles and two-mile three-furlongs this season, and is probably the pick on bare form.

Minella Melody made a decent start to her career over fences, finishing third behind Jeremys Flame in a Grade Two here last month. She carries 5lb less this time around and significantly less than when beating Dolcita home over hurdles. Carrigeen Lotus has a fair bit to find with the market leaders, with Daphne Moon and Pennywell Girl completing the six-runner field.

It’s Class v Klass in the 2.30pm Thurles Racecourse Handicap Chase, over the extended two-mile trip. All Class and Sil Ver Klass are both winners last time out, and a shade cozily at that.

They are likely to dispute the head of the market, with the former at a significant weight advantage. However, they’ll face challenges in the form of recent winner That’s Lifebouy, as well as Nelly’s Money - with the latter on better terms with Sil Ver Klass than when behind by two lengths last time.

She has been knocking on the door and is one who may well upset the party. Course and distance winner Espion Du Chenet is another runner of note in the field of 10.