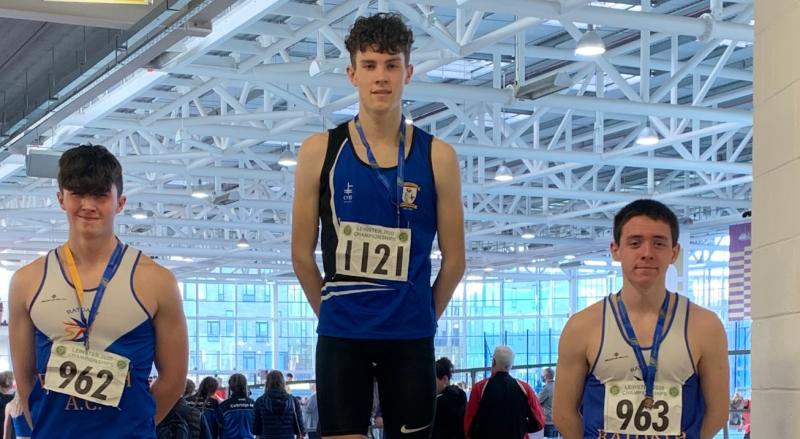 The Leinster juvenile indoor track and field Championship took place in the fantastic Indoor arena in Athlone and with the easing of restrictions the long-waited return to action had this fantastic facility packed to the rafters.

The St Peter’s athletes enjoyed a terrific afternoon on Sunday taking four podium places. Rory McLoughlin continued his dominance of the 800M event in his age group in Leinster when he once again stood tall on top of the podium, winning emphatically in the U19 800M race.

Rory led from the gun and the result was never in doubt as Rory opened up a gap from early on. He finished in a time of 1:58 which considering he pretty much had the race to himself was a great time.

Cian Gorham had another strong run once again finishing under two minutes in a time of 1:59, which is exactly where he wants to be at this time of year, winning silver is the boys U18 800M race.

Niamh Brady had a fantastic run in the girls U18 800M race. Leading from the start, this was one of best races of the day and it took the finish line photography equipment to separate the first two finishers with Niamh having to Settle for the silver medal in a time of 2.20.

But her willingness to take the race to her opponents should give her great confidence for the year ahead. Sean Reilly qualified comfortably from his heat in the boys U17 800M Race and was unlucky not to medal.

He had to settle for fourth place in the final which considering he just recently returned from injury was a decent result. Judith Bell was not going to allow the middle distance runners have all the glory in Athlone.

Having narrowly missed out on a medal in the girls U18 long jump with a fourth place finish she dusted herself down to take her place on the start line in girls U18 60M hurdles.

This was a keenly contested race with Judith holding off a late challenge to take a much-deserved bronze medal. Donnacha Reidy ran his first track race of the year in the boys U14 race and will have gained great experience from the race.

Mia Finnegan had a good performance in the girls U15 shot putt. Niamh Allen took part in her first ever high jump competition, finishing in fourth place in the girls U13 and although not medalling on this occasion she definitely is one to watch for the future.

The previous day Cian Smyth had a good performance in the boys U13 60M sprint finishing in fourth place in a very fast heat.

Louth had third-highest number of complaints against gardaí last year