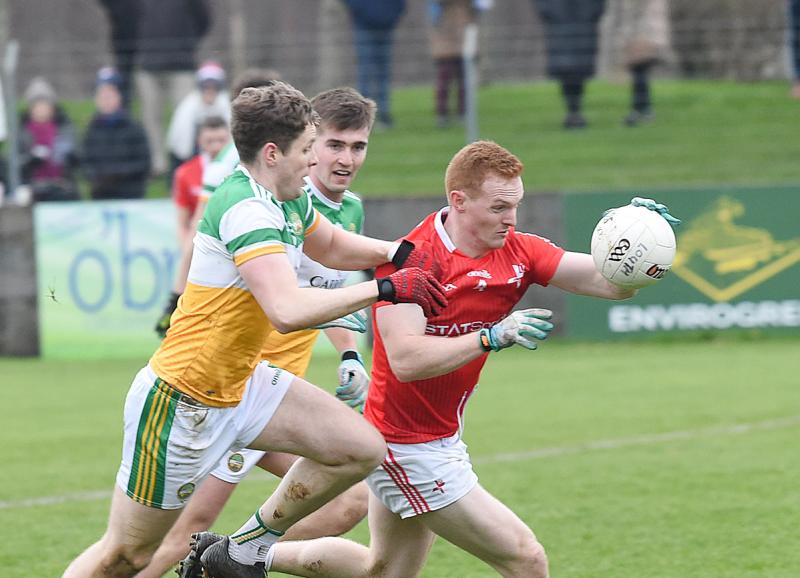 O’Byrne Cup Group A Round 3

Despite two second half goals, a lacklustre attacking display saw Louth slump to a third defeat in the space of a week in the O’Byrne Cup.

The Wee County trailed during most of this largely dead rubber contest, goals from Leonard Grey and Ryan Burns twice bringing them back level. But Ryan McNamee produced a masterclass from the bench, notching four of the last five scores for his team, all from play to record a narrow win.

With nothing on the line, the game started with a fairly low intensity, both sides seemingly forgetting their shooting boots.

Offaly twice blasted the ball wide while the home side registered one wide and dropped three more short in quick succession in the first seven minutes of action. The third of which did almost see Conall McKeever bag an early goal only for some for some good reflexes from Paddy Dunnigan.

It took the highly experienced Niall McNamee to get the scoring underway with a nice point from play, which was quickly backed up with a 45 from Paddy Dunnigan to double their lead.

The Wee County got off the mark on 10 minutes as Ryan Burns rose highest to win a mark near the goals and he duly tapped it over. A first score after four missed opportunities.

The sides traded scores through Ciaran Byrne and McNamee, however as the game progressed Offaly were looking that little bit sharper. A mix of good solo runs and an accurate kicking game forcing Louth into numerous fouls. By the water break the visitors led by 0-4 to 0-2.

Louth were getting plenty of ball and did create some decent scoring opportunities, the high ball from midfield being a weapon deployed to great effect at times in all three of their O’Byrne Cup matches.

The problem was they weren’t leading to scores and in a game which for so long lacked any real intensity or rhythm, Offaly’s narrow lead was rarely threatened.

If you didn’t know what competition was on in Pairc Mhuire, the lack of atmosphere and bite in the tie would make sure you knew this was Pre-Season and O’Byrne in its grimmest form. A far cry from the urgency and intensity we are sure to see come the National League and championship.

The game came to standstill on 23 minutes as both teams stopped playing to honour the memory of former Kilcormac Killoughey camogie star Aisling Murphy who tragically lost her life last week in Tullamore.

Before throw in, both captains paid tribute to the school teacher by laying wreaths at the corner of the ground, with both the Louth and Offaly panels linking arms for a minutes silence. Out of respect neither team used the number 23 jersey.

The game went into a lull in the second quarter, yet there were still three more scores, two points from McNamee cancelled out by a free from Ryan Burns. At the break Louth trailed by 0-6 to 0-4.

The second half saw the hosts up the work rate, going through the phases and showing patience before taking on any shots. Sadly, they were their own worst enemies throughout the contest and would drop six efforts short.

Yet their commitment did lead to a well worked goal. After turning over the ball deep into Offaly territory, Conal McKeever dinked the ball over the defence for Leonard Grey to blast it home on 40 minutes to level the game.

Offaly bounced back well, notching three in row courtesy of Bernard Allen (2) and Dylan Hyland to take a 0-10 to 1-5 lead into the final water break.

The Wee County struck the net for a second time on 59 minutes, a superb solo run from Dan Corcoran starting the move. He duly found McKeever who laid it off nicely for Ryan Burns to cushion home and level proceedings for just the third time in the contest.

The home crowd tried to rally the men in Red, but from here they only managed to raise one more white flag, a free from Tadgh McEneaney with many of those introduced by Mickey Harte failing to sparkle, albeit in a dead rubber game which was their third in a week.

John Maughan looked to his bench as well and it was Ryan McNamee that stepped up to the plate, grabbing three late scores in an explosive cameo that alongside an Ian Duffy free secured the win for Offaly.

In a little over a week's time, Louth will return to Ardee once more for what will be their first game of the National League where they face Laois. In what looks to be a hotly contested group the Wee County will need to get back to winning ways and fast if they are to continue their upward curve.

Over three games, Harte has got the chance to see many new faces and depending on injuries has more of his 2021 starters to possibly bring in for that game. It leads to many intriguing question marks over who will be in the starting 15. He certainly has plenty to mull over in the next 10 days.