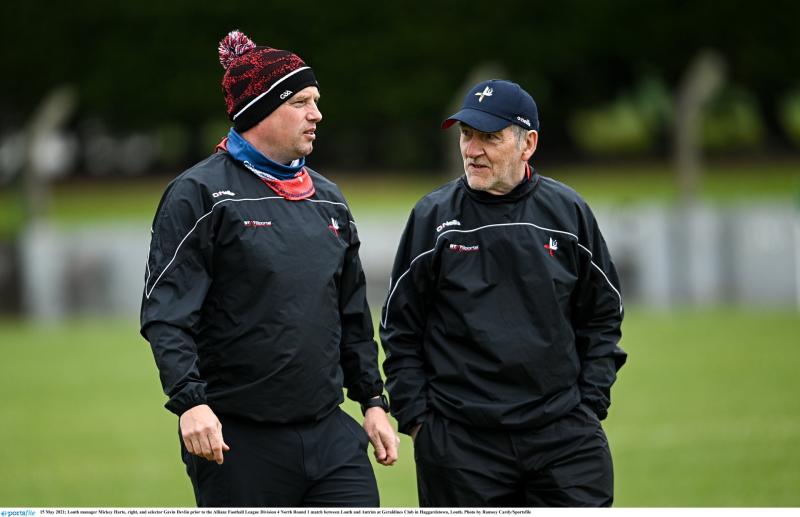 This weekend sees the return of the annual pre-season tournament the O’Byrne Cup, where the counties of Leinster duke it out in a race for glory that tends to be a lot more competitive than it’s much more one-sided championship equivalent.

It will Louth manager Mickey Harte's first foray in the competition, however he does have a proud history in Ulster at this time of year. Under his guidance Tyrone notched up 12 Dr McKenna Cups from 18 attempts. To do that in Leinster he will need to push the Men in Red to their limits.

The Cup was not run last year to the Pandemic, but it has produced four different winners in the past four editions in Longford, Westmeath, Meath and Dublin while the Wee County last lifted the trophy back in 2009. Their last appearance in the final was back in 2017 but they were well defeated by Dublin in Drogheda, 2-16 to 1-10.

The 2022 O’Byrne Cup will be a gruelling exchange that will see all four sides meet each other in the space of a week, with the group winners advancing to the final.

First up is an away game this Saturday January 8th when Longford host Harte’s troops in Lanesborough at the home of Rathcline GAA (throw in 2PM). The game was initially fixed for Leo Casey Park in Ballymahon but the pitch is currently unplayable.

Louth then make the trip to the capital to face Dublin in Parnell Park next Wednesday the 12th (throw in 7:30PM) before ending the league phase at home to Offaly in Ardee next Saturday January 15th. Below is a preview of all three teams and Louth’s recent record against them.

As mentioned above, the Midlanders come into this tournament as the reigning champions, doing so while toppling the likes of Kildare and Dublin before defeating Offaly to win the trophy for just the third time in their history.

In 2021 they were put into the Northern group of Division Three alongside Derry, Fermanagh and Cavan but struggled to make an impact. They were easily defeated by Derry and Cavan but did pick up a draw against Fermanagh.

Forced into a relegation play-off, Padraic Davis’s side duly upped their game and were rewarded with a seven-point win over Tipperary to retain their status.

They backed up that performance with a seven-point win over Carlow before Meath ended their run with an emphatic 4-22 to 0-12 victory.

Davis has since left his position as Longford manager and has been replaced with Billy O’Loughlin who will be stepping into the inter county dug out for the first time on Saturday.

Louth last faced the men in Blue and Gold back in 2020 in the first round of the Leinster Championship where in tough conditions Longford came out the better. They outscored the Wee County 0-3 to 0-1 in the final 10 minutes to eke out a narrow 1-9 to 1-7 win.

With the sides meeting again in the National League, this one is tough to call as both teams could be wary of showing their cards too early. But it is a great chance for both teams to start 2022 on a high.

If taking on the reigning O’Byrne Cup holders wasn’t enough of a challenge to kick off the new year, Harte will soon know what his players are made of when they run into a wounded Dublin side next Wednesday.

Playing in Division One of the National League, Dessie Farrell’s side were put into the Southern group alongside Galway, Roscommon and arch-rivals Kerry.

They would easily dispatch Roscommon and held their nerve to come out of Galway with a narrow win, but one of the better matches in the league saw them draw 4-9 to 1-18 with the Kingdom before beating Donegal 1-18 to 1-14 to be crowned joint champions alongside Kerry.

Their Leinster Championship defence proved to be a little more difficult in 2021, as the Boys in Blue were starting to look beatable down the line come the race for Sam Maguire, at times looking a shadow of the team that dominated the sport.

Wexford, Meath and Kildare were defeated without the hammerings of old as they picked up an 11th straight Delaney Cup. Next up a date with Mayo in the All-Ireland Semi-finals.

Up by six points at half time, the Dubs looked set to break the Westerners hearts once more, but somehow they recovered to send the game to extra time. They pushed on from here to record a 0-17 to 0-14 win. Dublin had been beaten in the championship for the first time since 2014.

Louth will know more about what sort of Dublin side they will face after seeing how they fare in their opener away to Offaly. Often it is a second or third string that lines out for Dublin at this time of year, with the ‘big boys’ given a break after their All Ireland success.

Mickey Harte could be up against a wounded animal, keen to resurrect their image as the kingpins of the sport. Or possibly they could face a fresh team of young hotshots keen to prove their worth to Dessie Farrell. Either scenario should lead to a tough game for Louth.

Hopefully it will go better then their last meeting, Dublin annihilating the Wee County by 5-21 to 0-10 points in the Leinster Championship back in 2019.

Offaly have been riding a crest of a wave of late having been in the doldrums of the sport for so long. They won the All Ireland U20 championship and will surely be hungry to blood these winners into the Senior team.

But it wasn’t just underage honours that went their way, the National League saw them go on a faultless run in Division Three, wins over Limerick, Tipperary and Wicklow seeing them march onto the knockout stages.

They followed that form up with a win over Fermanagh in the Semi-Final before routing Derry to land the League title in Croke Park.

Looking as good as they've been in quite some time, it was a with Joint Division Four winners Louth in the Leinster Championship first round that then faced John Maughan’s side, a game most know in these parts did not go the Wee County’s way.

A late Offaly goal looked to have killed off the Louth challenge, but they battled back with three scores in a row to level proceedings. Mulroy even missed a free in the dying embers to win the game having already bagged two of the last three scores.

Unfortunately, it was the Faithful County that found more in extra time, two more goals from Niall McNamee and Peter Cunningham helping them to a 3-19 to 0-19 win in Navan. A result that was a little harsh on Louth, albeit still impressive from Offaly.

Their year was quickly ended in the next round by Kildare by 1-15 to 0-13. There could be some needle in this fixture, but by then either side could be already out of contention and have one eye on the National League.

More so the fixture might end up being a final opportunity for players on both sides to prove why they should be included in the panel come the league, a scenario which will at least add some significance should both sides be out of the race for the O’Byrne Cup.

Dundalk FC strengthen their defensive options as preparations for 2022 intensify