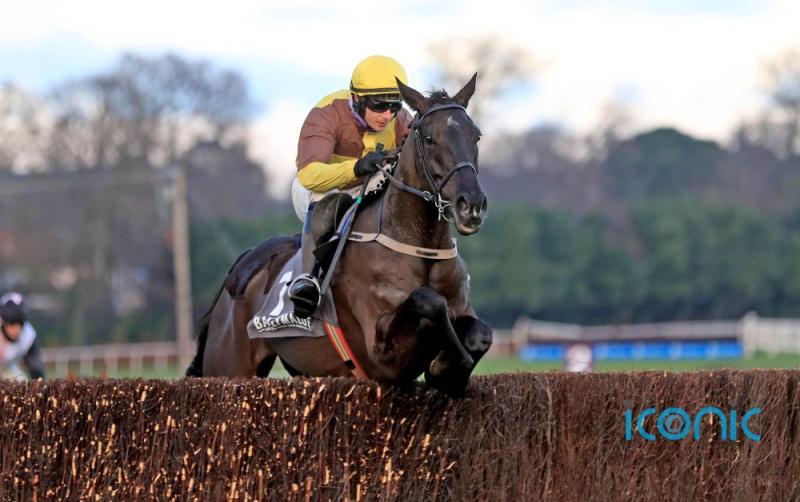 Galopin Des Champs looked a potential superstar when annihilating his rivals on his fencing debut in the Ballymaloe Relish Beginners Chase at Leopardstown on Tuesday.

The Willie Mullins-trained five-year-old looked a natural as he put in a superb round of jumping in the hands of Paul Townend over the two-mile-five-furlong trip.

The 4-7 favourite did not give his supporters an anxious moment after quickly building up an eight-length lead.

Galopin Des Champs, who was a winner over hurdles at the Cheltenham and Punchestown Festivals in the spring, extended his advantage to 22 lengths at the line without seeing another rival. Ain’t That A Shame was second with Floueur another 16 lengths away in third place.

Mullins said: “He was very impressive. I thought he was good but I didn’t think he was that good – that was just something else.

“He was so effortless over all his fences. Paul said he was fantastic early on and at a few that he met short, he just danced in front of his fences and took them at his stride.

“He did everything right and galloped away through the line and beyond it. He looks a very, very exciting horse for the future, especially going over a trip.

“He’s five going six, so he’s very young. All options are open for him.”

When asked if he could come back for the Dublin Racing Festival, he added: “I’d imagine we might do that, but we’ll take one step at a time.”

Galopin Des Champs was trimmed to 5-2 from 4-1 for the Brown Advisory Novices’ Chase a Cheltenham with Paddy Power.

The facile victory completed a double for Mullins and Townend after Klassical Dream’s victory in the Christmas Hurdle.

Mullins, who also struck with Concertista at Limerick, made it an across-the-card four-timer when Redemption Day coasted home on his debut under his son, Patrick, in the Midland Legal Solicitors INH Flat Race.

The 8-11 favourite cruised into the lead a furlong out to win by four and a half lengths from Music Drive without being asked a serious question.

“He’s a lovey young horse, by Blue Bresil. I bought him out of Pat Doyle’s nursery and from the time we started to work him, he showed us that he could be good bumper material,” said Mullins.

“Today I think he’s even better than what he showed me at home. I’m very happy with him. We’ll probably be looking at coming back here for the Festival and certainly looking at the big bumper.

“It’s been a really nice day. Klassical was great, Galopin Des Champs was something else and the bumper horse was very nice.”

Redemption Day was slashed to 8-1 from 25-1 for the Weatherbys Champion Bumper at Cheltenham.

Howyabud foiled the odds-on Horantzau D’Airy to spring a 25-1 surprise on his debut over the smaller obstacles in the Savills Maiden Hurdle.

Second in two bumpers and a point-to-point, the four-year-old gelding made virtually all the running over two and a half miles in the hands of 5lb claimer Jack Foley to give Ellen Doyle her first winner as a trainer.

“He had good bumper form and ran in a very good point-to-point in Monksgrange last time. We thought a lot of him coming here and were very happy with him.

“He was progressing along nicely and then Paul’s horse made a slight mistake, after that we were expecting him to do the job.

“I got the licence in March and have had seven or eight runners. I’m thrilled for the owner as Charlie (Carter) has been with us a long time and I’m happy to see him getting his win today.

“We’ll see what way he comes out of the race, go from there and see what the owner wants to do.”

“Mark said they went a very moderate gallop and I was very worried with the last hurdle being missed because jumping is his forte, but you’d have to say he did it quite nicely,” said winning trainer Edward O’Grady.

“He had him in position A all the time. We’ll see what they would like to do with him now, he’ll go up a little bit.

“It’s lovely to have a winner here, we didn’t have too many runners. I bought him as a foal so I’m delighted.”

Panda Boy (16-1) came with a late run to spoil a gamble on Winter Fog in the Pertemps Network Handicap Hurdle.

The lightly-raced five-year-old, trained by Martin Brassil and ridden by JJ Slevin, asserted from the re-inserted final flight to beat Winter Fog by three and a quarter lengths. Futurum Regem was a length away in third place.

Slevin said: “It was a good effort, he travelled well and jumped well. He’s a good, tough, game horse and he’s won well.

“His form was decent and I was hoping he’d run well but I wasn’t sure. I was hoping he was capable of being in the first five or six, but he stuck at it well and he was a good winner on the day.

“Over that trip he has a little bit of class and a bit of cruise about him, and that’s a good sign. Whatever he does over hurdles will be a bonus because he’s going to be a right chaser.”