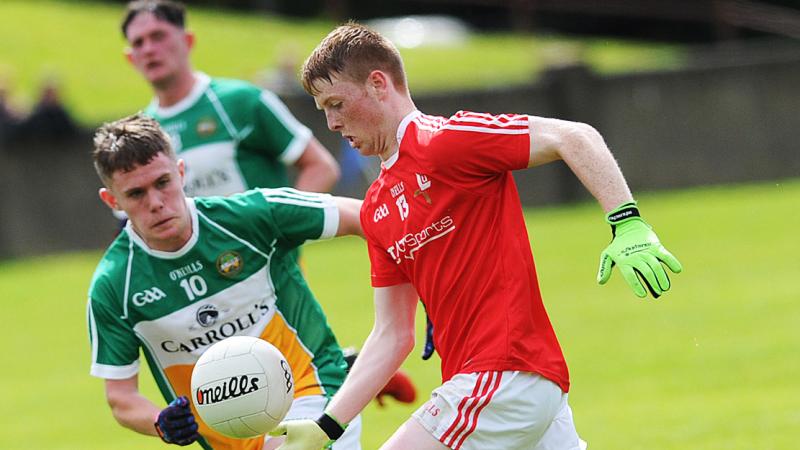 Two weeks ago, after a year’s hiatus due to the pandemic, the champions of Louth finally got their chance to prove their worth on the Provincial stage as the Leinster Club Championships made a triumphant return to the GAA calendar.

First up to represent the Wee County was the Junior champions Glen Emmets, who after securing a return to the Intermediate ranks and notching up a league title earlier in the season were now tasked with tussling it out with the beat teams in the East.

First up was a dangerous tie with Meath champions St Vincents, yet despite coming in on high alert the men from Tullyallen made light work of their neighbours.

Keelan O’Neill, off the back of a hattrick in the Junior final against John Mitchels, was in flying form that day, and despite looking in trouble in the second quarter his fellow attackers helped them eventually coast to a nine-point win.

He was keen to praise both the starting 15 and the firepower available in reserve for his side, when reflecting back on their 2-13 to 0-10 victory in Drogheda.

“Our forwards are absolutely flying, even the lads who are coming off the bench, the young lads like Tadgh Downey who came in, he hasn’t had a lot of minutes this season but as soon as he came in he got a goal” stated O’Neill.

“Other years our bench wouldn’t have been great, if we lost somebody that was it, game over, it was someone coming into the match who wasn’t as strong but now the young lads we have this season are flying.

“Then there’s others on the bench, the likes of Damo Grimes and Keith Lynch, veteran players who can still come on and do the business, bag the goals or points that we need in a game.”

Such an emphatic win is a great piece of form on its own, but dig a bit deeper and the display was even better. They played the first half without the services of Tom Grimes and their attack was masterful without the presence of talisman and Louth County player Conor Grimes.

Despite his absence, the former Louth underage star doesn’t feel any extra need to perform, in some ways not having him on the field works as a positive, freeing up the attack to be more creative and catch teams preparing for Grimes out, exploit them for not taking their other threats seriously.

“Obviously it does come as a big loss whenever he isn’t in the side, but at the same time it almost catches other teams out as they are always expecting Conor Grimes to be the main man.

“The rest of us can then play our game, you could see it in the last game against Vincents, once we get our own game going, we can really put teams to bed. It lets us have our chance to shine.

“They always expect us to put balls into Conor, but teams just can’t really live with us when the rest of us are left one vs one.”

The club have had a tough time recently when tackling the Provincial championship quarter finals. They were beaten by Clogherinkoe from Kildare by 1-13 to 1-8 back in 2012 while more recently the Emmets were narrowly put to the sword by Meath Hill in 2017, falling that day to 0-14 to 0-11 loss.

But since then, a new generation of footballers have come through the ranks at the South Louth side, with O’Neill feeling the club are in a much better position to fight for Leinster honours since the arrival of current Junior manager Ronan Lambe.

“I was part of the panel, I actually started at corner forward that day against Meath Hill, but the team is completely different to then” he exclaimed.

“That was one of my first years in adult football and a lot of the players are still around from then, but we brought in young lads too, so it is a completely different atmosphere around the club.

“It is in a far better place, we’ve brought in Ray Lambe, he has us absolutely flying through some of the drills he’s brought into training. We are playing a very different type of football and it really is a completely different team to what lined out against Meath Hill. I wouldn’t be too fussed looking back at that game.”

While a feisty tie against Meath opposition always brings with it a challenge, the Emmets will need to step it up a gear this weekend when they face Clonbellogue of Offaly in the Leinster Quarter finals this Saturday at Gracefield’s GAA Grounds Portarlington (Throw in 1PM).

It will be the Tullyallen side’s stiffest task, as the men from Tullamore are the current Offaly Intermediate champions. It is a side boasting three U20 stars who won the All Ireland this year in Keith O'Neill, Shane O'Brien and Jamie Guing.

O’Neill in particular was superb by all accounts in their county final against Raheen, scoring 1-4, 1-1 from play, while also setting up two other goals as they ran out winners by 3-15 to 2-8.

Keelan is aware of the talent his opponents have yet he is confident The Emmet’s have enough firepower of their own to bring the fight to Clonbellogue in a match he is expecting to be very open.

"I’ve done a bit of research myself and so have the management and it will definitely be our toughest game this season but at the same time I’d imagine we will be their toughest game too.

“Looking at videos of them, they have very good forwards, they are a real young team who move the ball fast and it won’t be a defensive match. It will be all guns blazing, a proper shoot out. It is going to be a real dogfight where no team is going to run away with it.”