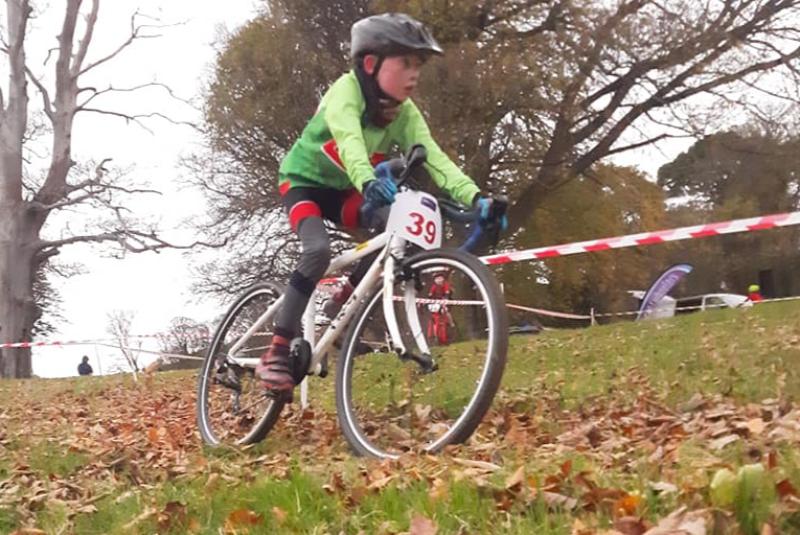 The latest round of the Leinster CX league took place in the Beautiful grounds of Belmont Demesne in Co. Wicklow. With vital points at stake and only two rounds of the league remaining, competition was always going to be tough.

Michael O’Rourke was the first club rider on the course in the Under 12 event and just narrowly missed out on a podium place with a 4th place finish. Aidan Delaney and Shane Meegan took to the line for the under 14 boys race and both were involved in the thick of the action.

The Under 14 girl’s race was once again dominated by the Cuchulainn girls with Ffion Dolan taking the win from clubmate Holly McCaffrey, with Grace O’Rourke in 4th having just missed out on 3rd place due to a mechanical problem.

Callum McCaffrey led the way home for Cuchulainn in the Under 16 boys Race with a podium finish, followed not too far behind by AJ McAreavey. Rhiannon Dolan also managed to claim the runner up spot in the girl’s under 16 event.

A number of senior club riders took part in the senior events but unfortunately no prizes were collected this week.

The mid week cyclocross league has almost reached it’s conclusion as riders start to scramble for points. Callum McCaffrey made maximum advantage of his handicap as he took the win, leading almost from the start.

Connor Murphy was the next rider home with Italian based Adam Gilsenan in third. Johnny McCabe continues to sit at the top of the leader board but with only a single round remaining his lead is far from secure.

The underage league also provided some exciting racing with another impressive display from Rian McCrystal, storming his way through the entire field to take the win from league leader Eoin Davis followed by Ffion Dolan.

The battle for the league win should be decided on the last night as Darragh Murphy and Eoin Davis battle it out for overall honours. The final podium place will also be a very competitive affair with five competitors still in contention.

Saturday December 4th will also decide the Louth Cyclocross champions with racing due to start at 10am on The Bike Station course. The racing should be exciting as many of the younger riders will be looking to upstage the older generation.