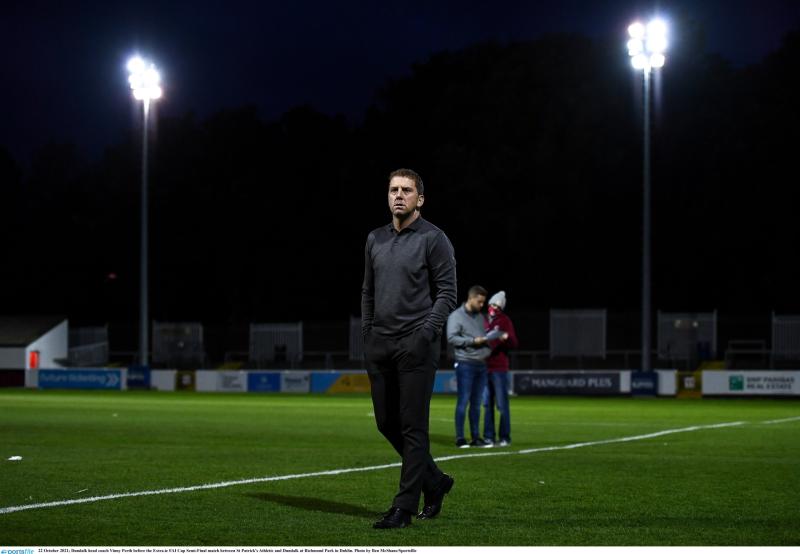 Vinny Perth says he is in the dark about the future of Dundalk FC amid continuous speculation that the club’s owners, Peak6, are looking to relinquish control of the club.

Speculation of Peak6’s intentions of cutting ties with Dundalk were further fuelled over the weekend after they removed the club as a strategic partner on their official website.

“Sometimes you’ve got to check your emotions,” said Perth after taking time to reflect following the 3-1 defeat at St Patrick’s Athletic. “It’s been really, really difficult. It’s been the most enjoyable, but the most difficult three or four months in my life.

“I really feel for the players. If this is going to be their last dance, I feel they deserved a lot more than that. They deserve to finish in the Aviva Stadium, but it’s not to be.

“Maybe as a club, we don’t deserve it, but that’s just the way it goes. I’m devasted for that group because what they’ve given to the club and the supporters has been huge.”

With no European football likely to be played at Oriel Park next season, Peak6’s valuation – believed to be in the region of €2million – could impede a potential sale.

A locally-based consortium is thought to be interested in assuming control of the club, while there has also been widespread reports of interest north of the border.

Andy Boyle and Ryan O’Kane are currently the only first-teamers signed up for next season, with Perth, as well as the other 21 players, out contract in less than two months.

“We are talked about and I take that as a compliment, but we’re talked about so much that it’s just difficult,” continued the Dundalk head coach. “I’m starting to not trust myself in terms of what I’m saying because there’s so many things spinning around.

“It’s just a difficult environment for the players. They all have lives. All our players, including myself, are out of work in five weeks. These are real issues.

“I hear things I say and they’re taken in a different context and people say to me ‘I seen that headline’ – it’s just difficult to work in this environment now because of our club and because of where we are.”

Despite uncertainty surrounding the future of both himself and the players, Perth believes that Peak6 have the best interests of the club at heart, and that criticism of their ownership hasn’t helped matters in what has been a forgettable year for The Lilywhites.

“It’s too easy to be critical of anybody else or how the club is run. I think fundamentally, anyone that puts the guts of a million into any club are good people. We need them people, but the criticism and the rumours around the owners certainly hasn’t helped us as a club.

“We’ve made mistakes as a club. I’m culpable for some of them, as some of you have pointed out going back into early 2020.

“It’s very difficult because there’s people there with families and they’re out of work in a few weeks like myself. You’ve got to earn a living and look after people’s mentality and their mental health.

“All the guessing and the world we live in now makes it difficult for a club like us because we’re obviously coming from the top down and there’s huge speculation. I’m not against media speculation if I was in a club that’s on the way up. It’s just that so much of it is negative.”