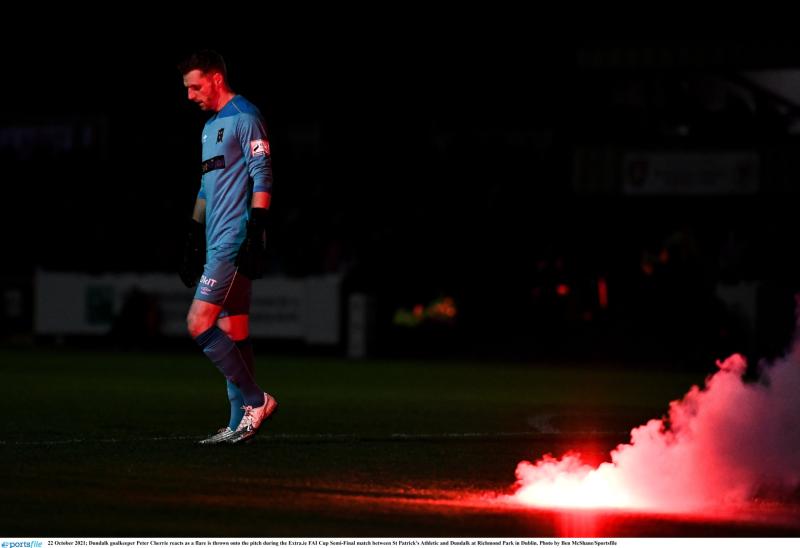 Dundalk goalkeeper Peter Cherrie reacts as a flare is thrown onto the pitch during their Extra.ie FAI Cup Semi-Final match with St Patrick's Athletic at Richmond Park. (Photo Ben McShane/Sportsfile)

Dundalk FC have issued a statement in relation to the use of flares and other pyrotechnics by their fans recently at matches held in Oriel Park, Dalymount Park and Richmond Park.

The club had come under pressure from both the FAI and RTE as to the safety of staff and fans at the ground as result of a small group of supporters letting off flares, smoke bombs and pyrotechnics during matches against Shamrock Rovers, Bohemians and St Patrick's Athletic. The practice has led to complaints being issued to the club.

While stressing they are delighted to have such great support, the club has now warned that lifetime bans from attending Dundalk matches will be issued to any fan caught with the items in Oriel Park.

"After our recent home match against Shamrock Rovers, the club received numerous complaints about the behaviour of a small number of fans" the statement read.

"We have a message for this small number of individuals, who again showed disregard for the safety of other Dundalk fans by using flares during our recent away matches with Bohemians and St Patrick’s Athletic, with the potential to cause harm to innocent bystanders and people doing their jobs.

"To these individuals, who have also recklessly used fireworks and have no regard for the wellbeing of other Dundalk supporters – if you are caught with flares, fireworks, smoke bombs, or any pyrotechnics, we will issue them with lifetime bans from Oriel Park and will work with other clubs to ensure they don’t attend away matches either."

The use of flares has become a more frequent sight in the stands of League of Ireland grounds, mainly as a way of generating a lively matchday atmosphere as well being a popular way of celebrating following a goal. However when used without the supervision of Pyrotechnics experts they are dangerous and can cause serious damage such as burns if they go wrong.

The use of flares is forbidden by the FAI due to safety concerns, with large fines given out by the sports governing body as means of making sure clubs do all they can to prevent such items from getting into the ground.

The Dundalk statement continued that they did not want to stop the enjoyment of fans in Oriel and that the security of everyone entering the ground was their main reason for issuing this decree to the supporters.

"We are not trying to stop you from enjoying matches, we need our fans more than ever and, let us reiterate, your support is greatly appreciated by all at the club, none more so than the players and staff.

"The FAI are not being unreasonable in their alarm of these actions and RTE are not being vindictive in reporting the club for concern for the staff, we are simply trying to protect all in attendance against the dangers of these items.

"The Health and Safety of all people attending our matches in Oriel Park is paramount to us and extra security measures will be in place for all remaining home matches this season."

The Lilywhites have three remaining home games as they look to avoid the dreaded Relegation with Play Off. They host Waterford in a must win encounter this Friday night, before later welcoming Longford Town and Derry City.