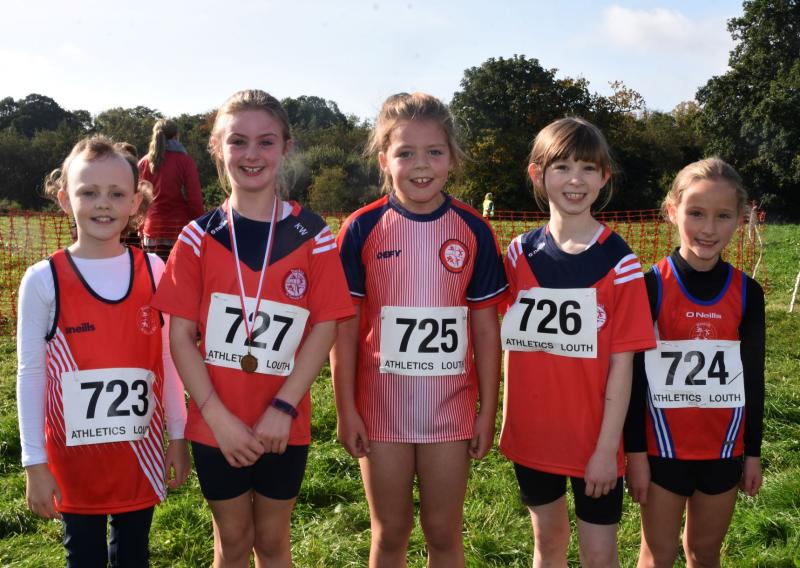 Twenty-five young St Gerard’s AC athletes made the short trip to Bellurgan Park and competed in the U9, U11, U13 and U15 categories.

The Championship events kicked off with the Girl’s U9 600m race, with Katelynn Woods, Naoise Rankin, Freya Kerrigan, Emily Culligan and Eimear Cumiskey representing the Saints.

Having had a taste of cross-country action ‘out of age’ in the U10 event last week, Katelynn delivered a superb run to land her a spot on the podium, finishing 3rd to claim bronze - with club mates Naoise, Freya and Eimear picking up medals for their strong finishing positions also.

Next up was the Girl’s U11 1500m event, in which Aimee Quinn, Holly Phelan and Kate Hegarty represented St. Gerard’s with all three girls running very well in a big field.

The Boy’s U11 race saw Cathal Bastible Diaz, Calvin McCourt, Errol Boyle, Fane Kelly, Patrick Murphy, Evan Cheshire and Shay Curran battle it out. In what was a very fast race with fierce competition, the St. Gerard’s boys ran brilliantly to claim the silver medal in the Team event.

The U13 2500m race for the girls featured Sadie Murphy, Anna Duffy, Aideen and Alannah Cumiskey, and Aoife Murphy. It was a great race on a tough course with Anna and Sadie battling it out all the way to finish 5th and 6th respectively.

Strong performances also from Aoife, Aideen and Alannah put the girls in pole position for the team event and they were overjoyed to claim the Gold Medal. Aaron Mulligan was the only contender for the club in the boys U13 race, and he put in a fine effort finishing well up the field.

Hot on the heels of her 5th place finish in last week’s U14 girls event in what was her first ever cross-country race, Aislinn Murphy competed ‘out of age’ in Sunday’s U15 gruelling 3500m race.

She delivered another excellent run to take 5th spot again, surrounded by very tough competition. Punching the air as she crossed the finish line, she was clearly delighted will her performance.

James Duffy completed the line-up for St. Gerard’s, competing in the Boy’s U15 race. Running well and consistently throughout, he was cheered on all the way by the many St Gerard’s athletes who stuck around to support their clubman.