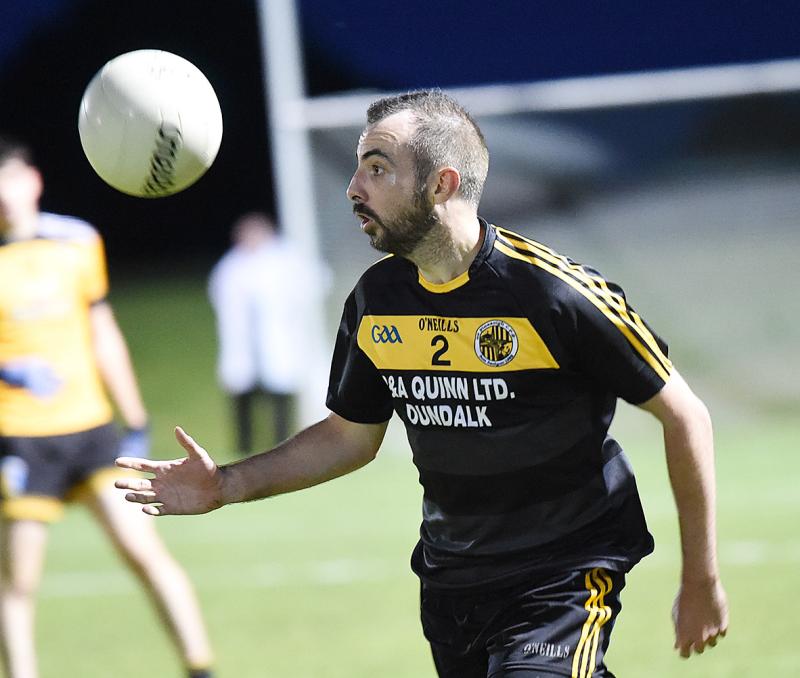 Workmanlike Na Piarsaigh pulled off a professional 19 point win over Cuchulainn Gaels to take the top seeds spot in Group D of the Louth Junior Championship and a place in the group winners side of the quarter final draw.

Reliable trio of David Boyle, Conall Shields and Eamon McAuley all found the net for the Rock road side in a one sided affair on Friday night in Darver.

With both sides coming into the game on the back of two wins, the decider for top spot never lived up to the pretence. Cuchulainn Gaels would field without Seamus and Micheal McCabe, star performers the Monday night previous and Brendan O’Hagan, the goalscorer on the historic night they sealed their passage to the knockout stages for the first time ever.

The opening quarter was tense with both teams feeling their way into the game. Gaels played with confidence but you felt it was only a matter of time before Na Piarsaigh would up the ante and pull away.

With the sides level twice in the opening ten minutes, it needed an opportunistic flick to the net from David Boyle to send his side on their way. Raymie Phillips landed three frees for Cuchulainn in the half, but Mark Larkin was also industrious with two points from play off the left wing.

The score at half time, 1-6 to 0-4 in favour of the eventual winners was a fair reflection on the opening half despite Robbie Murphy missing a glorious chance to put the game to bed.

After the interval Na Piarsaigh were determined to get their business done early. John Garvey’s side outscored their opponents 1-8 to 0-2 in a third quarter of domination. John Paul Elmore and Martin Hynes scored Paul Sharkey’s sides only points of the half in two rare attacks.

Larkin and Boyle were on hand to add to their tally finishing off move after move of swarming black and amber striped play. When Stephen Arrowsmith forced a Gaels turnover, Ciaran Murphy had the vision then to find Conall Shields unmarked inside to finish to the net.

There would be no respite for Cuchulainn Gaels as the best player on the field Eamon McAuley would bring the contest to a close with a goal and a point in the final quarter. The former Louth player was in excellent form bombing down the left flank all night. With nothing learned on the night bar draw seedings, both sides will know that there are bigger tests to come.

For Na Piarsaigh their reward is a tie against Stabannon Parnells this Friday in Darver, while on the same evening the Gaels face a stiff task when they take on John Mitchels in Pairc Clan Na Gael. Both ties throw in at 7 30PM.

Mattress and sofa amnesty to take place in Dundalk today