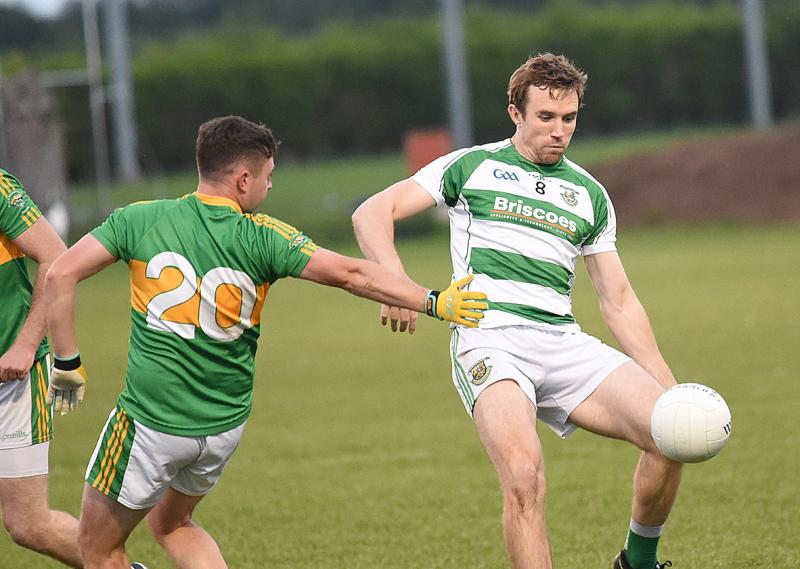 A late Eoghan Duffy goal proved decisive as St Fechins booked their place in the Intermediate Quarter Finals with a narrow win over Sean O’Mahony’s in this hotly contested Group A clash in Haggardstown.

The Termonfeckin based side led for much of the contest but could never shake off the challenge of the Dundalk club, as just two points separated them deep into the second half despite prolonged periods of dominance. The goal being just enough to make it two wins from two.

The scoring began seconds after the whistle with Duffy getting into space and tapping over impressively to give St Fechins an early lead, but it was quickly cancelled out by a free from Thomas Rice.

The men from South Louth adopted an old school catch and kick game plan, winning possession around the middle and bombing it into their forwards. Said forwards were willing to take on chances good and bad leading to four first half wides.

The O’Mahony’s favoured a more patient approach, utilising runners, short passes, and pacey solo runs as they looked to assess their options before getting it into their marquee forwards.

Ronan Holcroft put his side back in front after 11 minutes, however again it didn’t last long as the Point Road men battled back with two of their own courtesy of Terry Kelly and Stephen Kilcoyne with David Redmond from the backs proving to be an asset with his runs from deep.

At the first water break they were deadlocked at 0-3 apiece, but from here it was mostly one way traffic with O’Mahony’s kept to just a point in the remaining minutes of the half.

Fechins direct style was causing problems, instead of just shooting from anywhere when getting the ball they were running with it and drawing plenty of fouls.

They finished the opening period with eight frees in the opposition half, three frees in a row from Holcroft and Joey Corrigan seeing them take a 0-6 to 0-3 lead into halftime.

The second half saw them upping the ante, increasing the speed of their game and keeping the Dundalk men off the ball for prolonged periods. Such was the dominance a wide from Kilcoyne on 41 minutes was their only attack in the third period.

Despite this dominance they just could not get enough scores to see the game out, Holcroft and Corrigan raising white flags to go 0-8 to 0-4 in front at the final water break.

A melee involving plenty of players from both sides just before that break seemed to thwart Fechins momentum and the O’Mahony’s battled back to narrow the gap to two points.

Unfortunately for them the next big score came the way of the men from South Louth, the decisive goal on 58 minutes.

Corrigan rose highest to win the ball before teeing it up nicely for Duffy, who soloed along the endline and blasted it into the net to seal a quarter final place for his side. O’Mahony’s next task is a do or die clash against Roche Emmets at the same venue next Saturday.