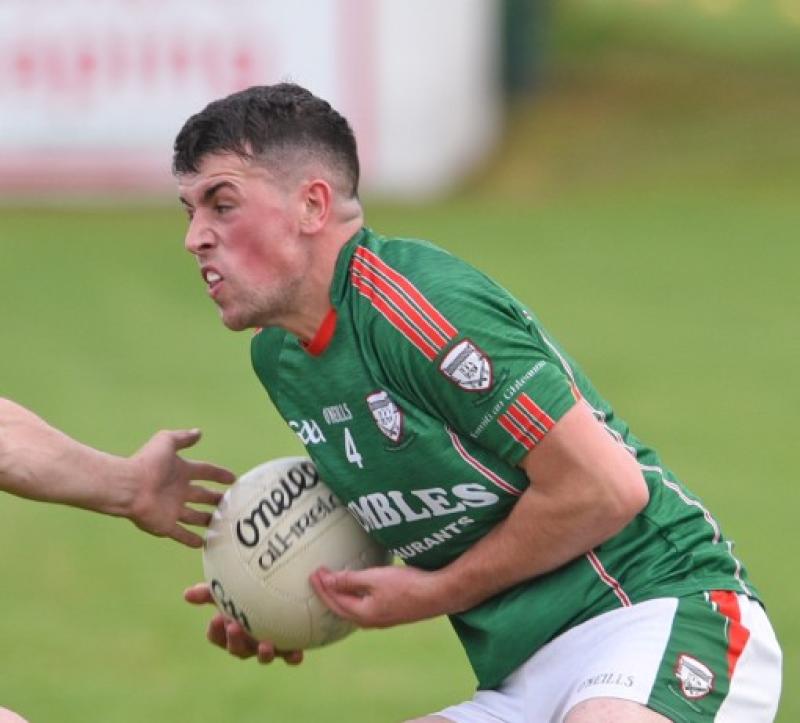 Glen Emmet's James Butler, who hit 1-4 as his side made it two wins from two in the Junior Championship. (Pic: Ciarán Culligan)

RAYMOND Lambe’s Glen Emmets advanced to the knockout stages with a 15 point win over Wolfe Tones in the Gaelic Grounds.

The Group C Junior Championship game began in a frantic nature with both sides coughing up and spurning goal chances. Cool heads were needed in the midday sun.

Tones midfielder Mark Healy spurned the first opportunity having made an excellent run, then it was Glen Emmets turn. Kealan O’Neill playing inside beside Conor Grimes flashed an effort wide before Grimes himself had a snapshot saved from close range.

Inevitably the first score of the game would be a goal. Johnny Lynch in goals for the Tones saw the ball sail over his head and into the net after his wayward kick out was intercepted by Conor Grimes.

That proved to be a hammer blow to the Tones collective psyche as they struggled to clear their minds and focus on the game. Glen Emmets unsympathetically rattled off the next five scores, Grimes with three along with an impressive Robbie Byrne effort.

The first half water break proved to be a much needed respite for Johnny Kelly’s side who finally got their first score of the game when they returned back out onto the field. Rory Taaffe’s brace would see the Drogheda side shoot five unanswered scores.

Eoghan Brennan with a marvellous score, arguably the point of the game in the Tones best passage of play. The upturn in fortunes was down to some direct running from centre back Sam Kelly who pointed and Dwayne Leavy working tirelessly off the wing.

The Tullyallen men were patient however and weathered the storm to end the half with two scores. Grimes added another along with a Cathal Maguire effort. That brace made it 1-7 to 0-5 at the turn.

Tones free taker Trevor Walsh began the second half with the first score, Walsh would be the Tones only scorer in the second period with three frees as Tullyallen were soon to put the game to bed.

Conor Grimes curled one over before Kealan O’Neill and James Butler combined to score a goal apiece in the next two passages of play.

O’Neill showed great vision to find Butler mid stride on the blindside of the Tones defence. Butler collected and finished with aplomb into the Drogheda United end.

He then turned provider with a long range shot that struck the crossbar. O’Neill was quickest to react to the rebound to bury home from close range. That would be the game in a devastating double blow.

Walsh responded defiantly with two more free’s before he was substituted with injury shortly afterwards. The game would peter out with five points in the final quarter from the in-form duo of Butler and O’Neill and a free from substitute Alex Fowler.

The Emmets win now sets up a mouth-watering clash for top spot between the other unbeaten team in the group Lann Leire this Sunday. Although the shoulder injury that forced Conor Grimes off the field in the second half will occupy the minds of Tullyallen supporters more during the week.