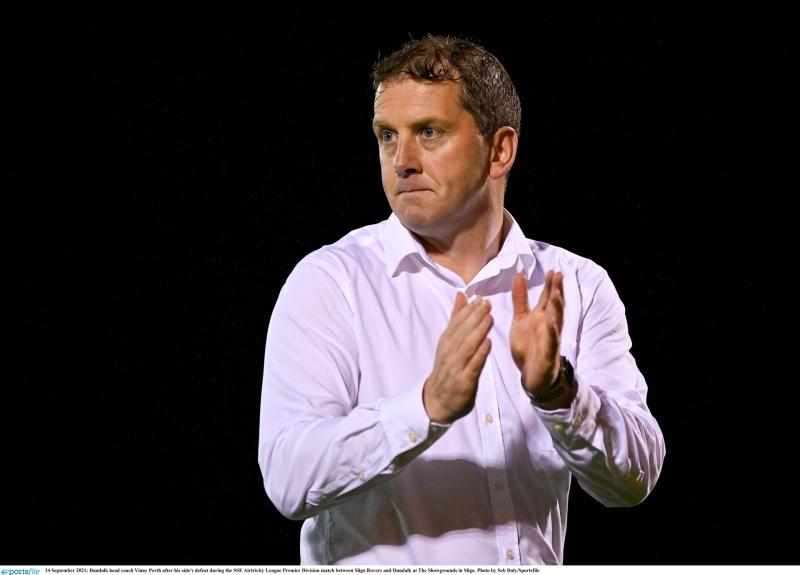 It was another night to forget for Dundalk FC as Sligo Rovers came from behind to snatch the three points in the Showgrounds. Despite Pat Hoban giving the Lilywhites an early first half lead, the home side battled back through Andre Wright and Lewis Banks to bag a valuable win against an injury-stricken Dundalk team.

Speaking after the game to the Democrat, head coach Vinny Perth felt that his team were going in the right direction but that not being able to freshen up his side was costing them dearly with just nine first team players available for training ahead of the game.

“We came up here tonight and we probably don’t deserve to lose that match albeit we gave away a few chances towards the end because we opened up a little bit as we had too” stated the Dubliner. “It was just two errors in the whole game.”

“It’s a building block and something I can work with in terms of the performance getting closer to what we need but we’ve got to be able to freshen things up and we haven’t got that at the moment and that's just the way it is.”

The decisive second goal came courtesy of a mistake from Alessio Abibi, who was between the sticks ahead of Peter Cherrie and the injured Cameron Yates. When asked about the goalkeeping situation Perth stated that he does not talk about team selections and never has.

With just one point secured from a possible 21 in the last seven games, the Lilywhites currently find themselves second from bottom in the table and in the relegation play-off position. However they are just a point off Waterford with a game in hand.

Perth is hopeful that he we will have more players available in the coming weeks as players begin to heal and is confident his side have enough talent to wrestle their way to safety and back up the table before the end of the season.

“It’s a tough result to take but once we get through this week, we’ll start to see some players coming back, we expect four back for Friday week and that would be the start of our run in.”

“As a club we are good enough to win a minimum 50 percent of those games between then and the end of the season. We started to show that tonight and that is all we can do.”

Next up Dundalk is a trip to Ballybofey to play Finn Harps in the FAI Cup, with the game available to stream on LOITV.