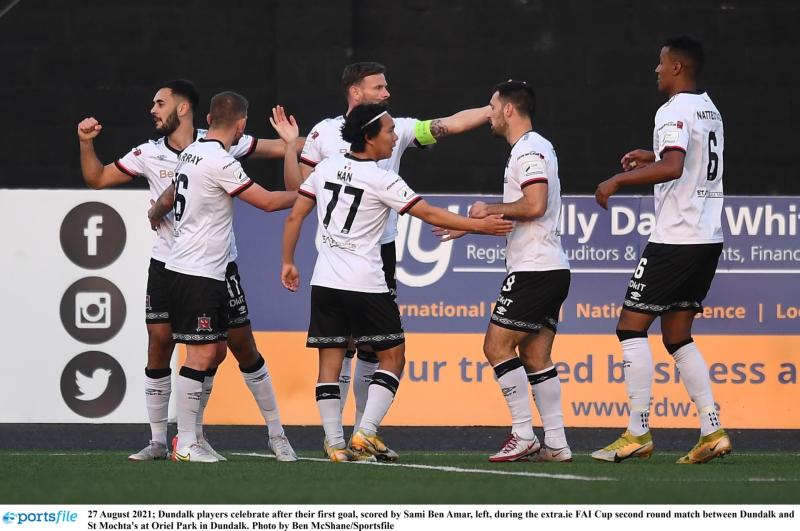 Although Gareth McCaffrey had equalised after Sami Ben Amar’s opener, a ten-minute hat-trick from Patrick Hoban in the second half, coupled with Han Jeong-Woo’s third for the club, ensured the 12-time winners will be part of next Tuesday’s draw.

Moroccan winger Ben Amar – making his full debut for The Lilywhites – put the hosts ahead on eight minutes when he headed home from Sean Murray’s floated corner.

The League of Ireland strugglers almost doubled their advantage when after Han retrieved, Cameron Dummigan crashed an effort off the underside of the crossbar.

However, it was the Leinster Senior League leaders who equalised on 12 minutes. A misjudged pass from Sonni Nattestad wasn’t controlled by Sam Stanton, allowing St Mochta’s captain Karl Sommers to nick it off the Scotsman and play in McCaffrey, who proceeded to round Dundalk debutant Cameron Yates before placing into an empty net.

Stanton could have made amends when his shot was palmed away by Adam Kmet, and the St Mochta’s goalkeeper kept it level two minutes before the break, saving brilliantly from Hoban’s close-range header after he got on the end of a Murray delivery.

Dundalk restored their lead six minutes into the second half from 12 yards after Ben Amar was body-checked in the box by Sean Byrne. Referee Graham Kelly pointed to the spot and up stepped Hoban, who dispatched despite Kmet guessing correctly.

Vinny Perth’s side made it 3-1 a minute later as Hoban – after collecting Murray’s pass – skipped the challenge of Alan Byrne before planting into the bottom corner.

Hoban completed his hat-trick on 61 minutes, calmly finishing after being played in by Murray once again as Dundalk put daylight between themselves and the non-league side.

Dundalk completed the rout on 73 minutes when Hoban’s initial attempt was kept out by Kmet, only for Han to score from the resulting rebound to make it 5-1 for the hosts.