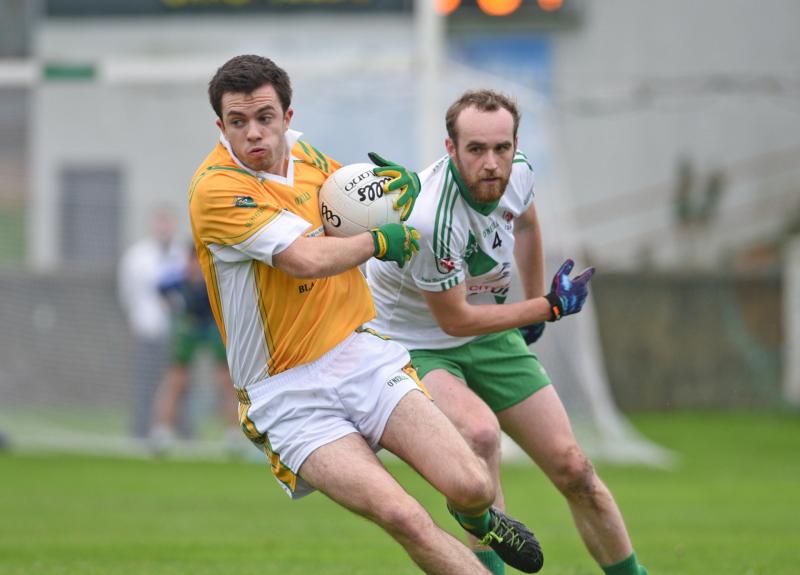 The Sean O'Mahony's Senior team had a well earned five point victory over St Fechins on Sunday afternoon on the Point Road, in a very entertaining high scoring game which the home team took the initiative in from the first quarter and mainly controlled for the remainder of the game.

The first 10 scores of this game all came from play and after 10 minutes the sides drew level for the third time on four points apiece after three wonderful scores from Stephen Kilcoyne plus a well drilled effort from Conor Finnegan from over 40 yards out using the outside of his right boot.

Thomas Rice then floated a neat point over the black spot before Oisin Breen raided up the right wing and unselfishly squared the ball across the small parallelogram for Terry Kelly to bundle the ball over the line and raise the green flag.

Stephen Kilcoyne then converted a free out of the hands and Terry Kelly landed a great long range score with his trusted left boot to leave the Termonfeckin side six points down. The visitors did kick the next three scores but thanks to another two outstanding long range scores from Stephen kilcoyne and Jonny Connolly the half time score was 1-9 to 0-8.

O'Mahony's completely controlled the early exchanges of the third quarter, raising five white flags in a row to take a nine point lead before the visitors notched a quickfire 1-2 to reduce the deficit to four points.

Terry Kelly and Kyle Carroll each landed neat scores from either wing, but it was the ever reliable Stephen Kilcoyle who notched another five points in the second half, to add to the five he converted before the break, showing his talent yet again with another man of the match performance and lead his team to a 1-16 to 1-11 victory.

Well done to our U13's players, who finished level after a very tough battle with a strong O'Raghallaighs side last Wednesday evening on the Point Road, with the final scoreline 1-7 to 2-4.

Hard luck to our U17's who put up a valiant display against a very strong Geraldines squad on the Point Road on Thursday evening. Despite edging two points ahead mid-way through the second half, a flurry of late scores for the visitors, including the games only goal left a final score of 0-11 to 1-12.