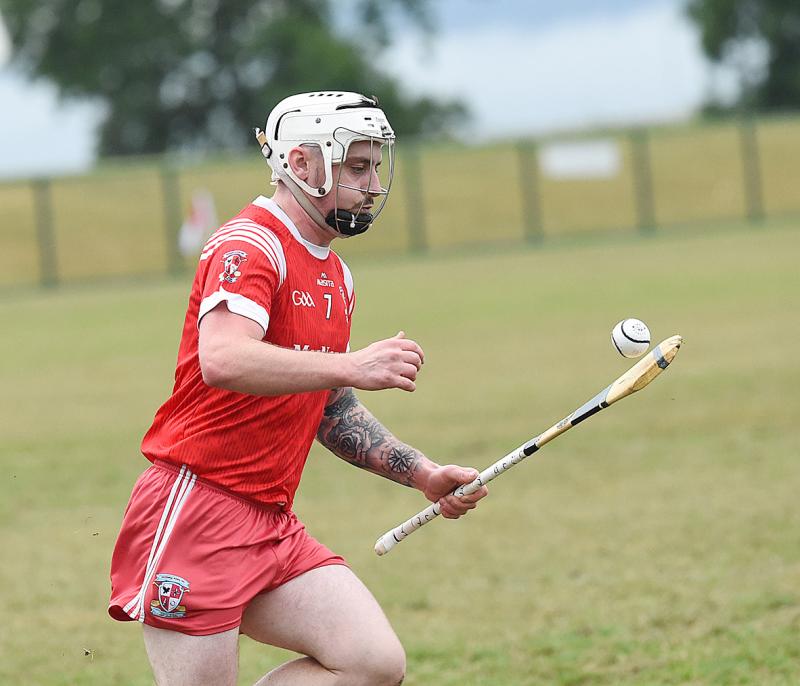 Knockbridge kept up their end of the bargain with a heavy defeat of a Mattock Rangers/St Kevin’s combination at Dowdallshill on Thursday night, but with results going against them elsewhere on the night, a final spot wasn’t to be for the reigning champions.

With seven points between the sides at the second half water break, and whispers of Naomh Moninne ahead in the other group game Knockbridge really went for the jugular to make certain that they would hit the required 13 points score difference to take that automatic final slot.

Player manager Ronan Byrne sprung Seán Marry and Neil Thornton from the bench for the final quarter. The pair both bagged a goal apiece minutes after the restart and ignited Knockbridge’s scorching finish, where they outscored their valiant Mattock/Kevin’s opponents by 4-7 to 0-1.

The scoreline was misleading and reflected poorly on the newly formed outfit, who were wholly competitive throughout the last group game. The contrast of tired bodies and a team with something to play for in the final stanza bore out in the flattering winning margin.

Conor Deane showed the champions intent early on and was very lively in the corner, buzzing about, getting the first scores and setting up the others as the Knockbridge men rattled off the first five scores of the game.

Shane Fennell bagged a brace from play in this period and was very accurate on the night. The newly formed side needed a score to settle themselves and after bracing the early storm Lee Crosbie found the target with an excellent brace himself.

However all that good plan would come tumbling down in the eight minute when Knockbridge full forward Gareth Hall found the net having been set up by wing forward Peter Brennan. Ger Smyth did respond with a well taken point.

Things would get better for the amalgamation side when county player Evan Maher buried the sliotar to the net on the 11th minute after some sterling work by Graham Condon.

That goal would leave three between the sides, but points from the impressive Stephen Hoey and Fennell made it 1-8 to 1-3 at the first half water break.

Mattock’s Jason Condon fired over the point of the game as they went on a scoring run of three points in a row. Their best period in the game will give the red and black side hope going forward. They ruled the airways and punished Knockbridge at every opportunity.

However, the champions showed their class in the 25th minute when David Kettle sublimely lobbed Johnny Galway to break the Mattock/Kevin’s spirit and ruled out the chance of an upset also, leaving it 2-12 to 1-8 at half time.

The third quarter was the opposite of what was to come, both sides shooting was chronically wayward, only landing two points each in the scrappiest of scrappy quarters.

Marry then scored with his first meaningful play of his introduction, a speculative low drive from distance found the bottom corner. That goal inspired the champions to open up and just go for it. Thornton duly did, with a goal shortly after, he finished with 1-2 in a rapid cameo.

Shane Fennell buried the fifth goal to the top corner of the net with a stunning strike and he wrapped up the night with a penalty goal in the last play.

Knockbridge with work to do will welcome the semi-final showdown against Naomh Moninne for a chance of retaining the Paddy Kelly.

Auctioneers say mortgage rules must be 'tweaked' despite dysfunctional market