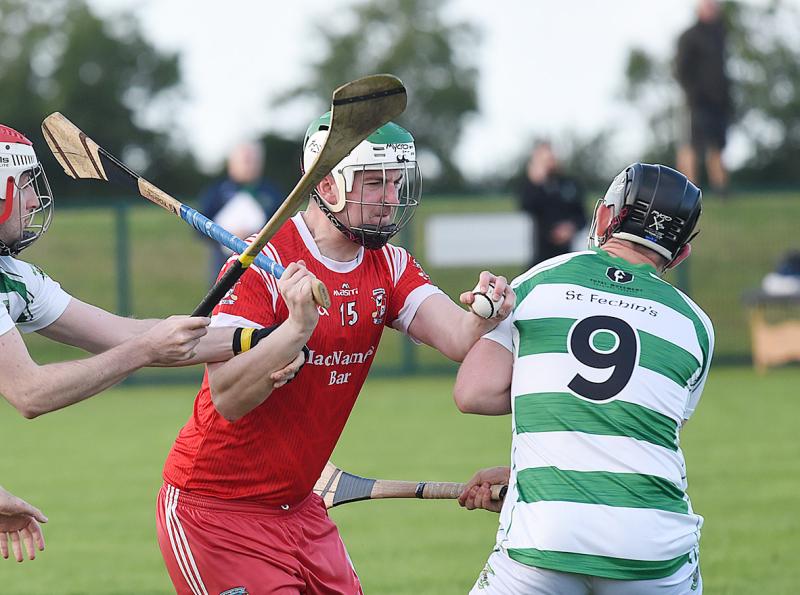 Both teams headed into this round two clash with wins under their belt and St Fechin's would be hoping to claim the points over the defending champions. Knockbridge opened the scoring in Darver with a point from a free from Shane Fennell, in what was to be the only time Knockbridge would be ahead for the match.

Bob Grace quickly got the equaliser quickly followed by two from Paddy Lynch and  one from Sean Kerrisk. Shane Fennell got his second from a free before Grace found the net following great work from Paul Matthews who himself put one over the bar just before the water break. Shane Fennell got his third from another free to leave Fechins 1-5 to 0-3 in front.

The teams continued to exchange points with Paddy Lynch and Shane Fennell finding their targets from frees. Paul Matthews added to the Fechins tally on the 20th minute with another point before Sean Kerrisk crucially added a second goal courtesy of a fine pass from Seaghan Connelly.

Paul Matthews also found the net following his first rebounded effort to put his team 11 points up by the 27th minute. Deep into injury time, Fechins were reduced to 14 men following a second yellow card for David Stephenson. Paul Brennan added another for the Knockbridge men just as the half time whistle was blown to leave his side trailing by 3-7 to 0-6.

The reigning champions headed into the second half 10 points adrift but now only facing 14 men. As a result they came out fighting, clocking up six points in the first 15 minutes with Fechins only adding two to their tally from Paddy Lynch and Peter Fortune leaving only a six point gap at the water break.

Again Paddy Lynch and Shane Fennell exchanged a brace of points while Knockbridge got the final two scores of the half, however it wasn't enough as Fechins remain unbeaten with a four point victory. All roads now lead to a vital final round of games where they meet Naomh Monnine, a win confirming their place in the final.