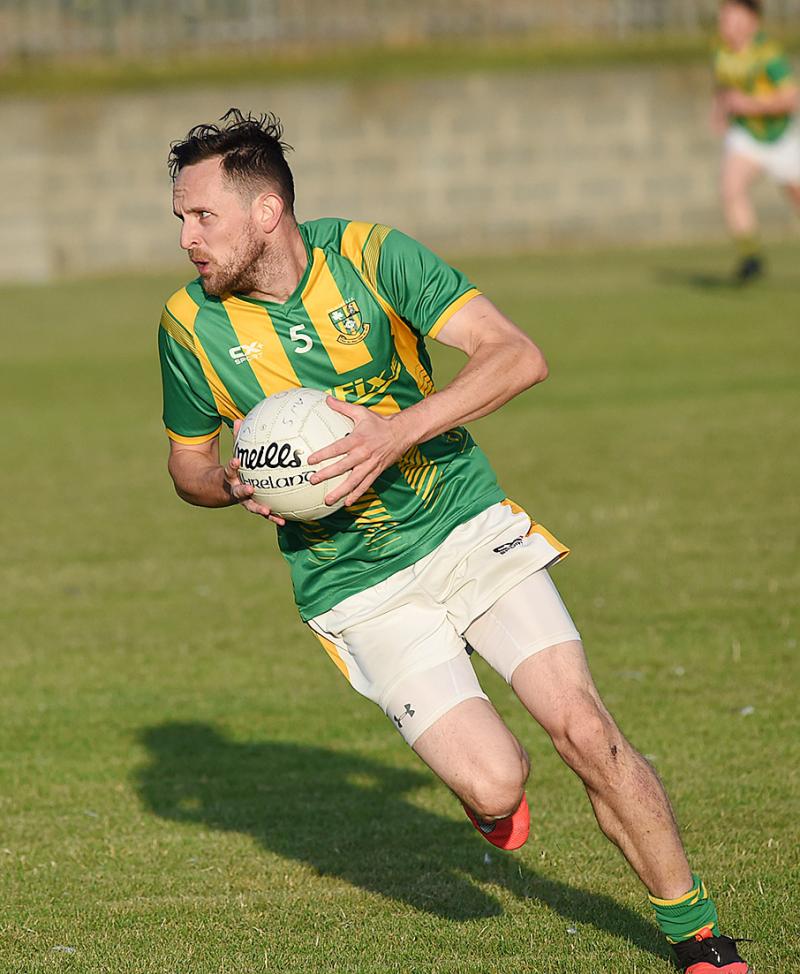 In a low scoring Division Two match the Joes edged out the Young Ireland’s by two points today at Cluskey Park on Sunday afternoon.

Despite playing into a stiff breeze it was the Young Irelanders who went into the first water break leading by 1-3 to 0-4, with the visitors goal coming from Cathal McFerriter. The Joes had points from Alan McKenna, Conall McCaul, Oisin McGuinness and Gabriel Bell.

The sides exchanged points in the second quarter with Alan McKenna on target for the Joes from a 30m free. The visitors had a goal disallowed while Gabriel Bell struck the woodwork for the Joes, as the Young Irelands went in at the break leading by 1-4 to 0-5.

Jack Mulligan had the first point of the second half for the Joes on 34 minutes with Cian O’Donoghue responding for the Young Irelanders. Points from Oisin McGuinness, Conall McCaul and an Alan McKenna free had the Joes ahead by one, 0-9 to 1-5 at the second water break.

The final quarter saw both sides miss good chances, while Fergal Sheekey pulled off an excellent save from Killian Staunton before the final score of the game came from an Alan McKenna free on 54 minutes to give the Joes a two-point win in a lack lustre match.

Table toppers Roche Emmets slumped to their second defeat in a week away to Clan na Gael on a treacherously wet Saturday night in Dundalk.

Dealing with the conditions a lot better, the hosts were on top for the majority of the encounter. The win puts them second in the table a point behind their opponents on the night.

Teenager Mickey McCourt gave the visitors the perfect start with a flicked effort to the net but Mark Newell soon cancelled the major out with one of his own.

Buoyed by the goal Jason Cullen and Billy Smith found their range to make it 1-7 to 1-4 at the halfway mark in the Ecco Road side’s favour.

Roche dug deep and moved ahead with the opening four points of the second half through three Barry O’Hare frees along with a Seán Dawe effort.

However when Smith converted a penalty, impressive substitute Paul Martin quickly added another goal in the next play when he reacted quickest to a shot off the upright.

The six point gap proved unassailable for the Faughart based side as the Clans continued their impressive recent form, with a contrasting second win of the week.

Home side Hunterstown Rovers made it two wins in a week over an out of sorts Oliver Plunketts outfit on Saturday night.
Despite the difficult underfoot conditions, county man Ryan Burns was outstanding for the hosts with ten points over the hour.

The Drogheda side went in 0-8 to 0-4 down at the break and the second half had an inevitable feel about it before Dean Burns found the net at the death.

Managerless St Kevin’s pushed a strong Dundalk Gaels all the way on a soggy Saturday night in Philipstown. With Ronan Phillips departing during the week, the red and black outfit regrouped and put in a spirited performance and led by 0-4 to 0-3 at the break after Gaels wingback Emmet Lindsay opened the scoring.

Another member of the Dundalk side’s half back line David McComish would soon level the game while Cian Callan would single-handedly keep the hosts in touch with all of their scores. Gary Shevlin’s introduction proved crucial as the substitute came in and pushed the margin to three with two scores.

Callan would rally again, but Lindsay added the Gaels last point of the evening which would prove the winner, as Callan narrowed the gap to one before the final whistle.