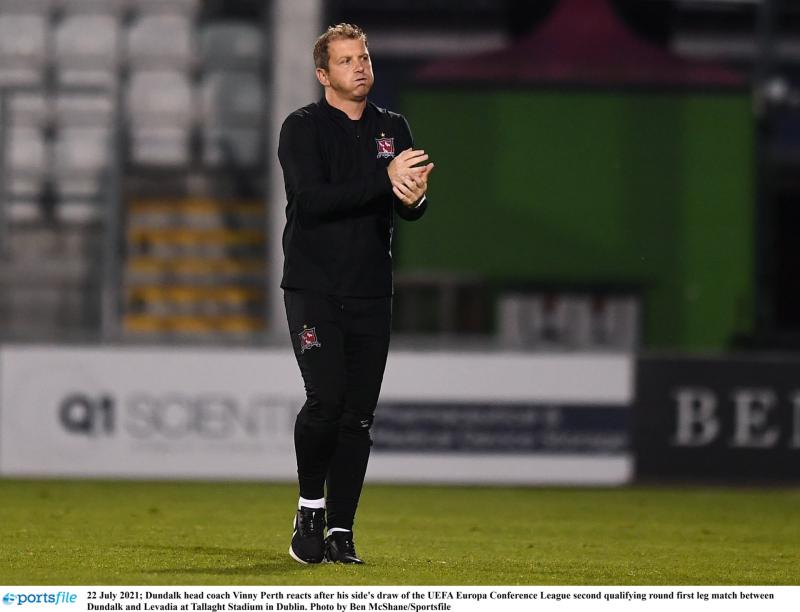 Dundalk FC head coach Vinny Perth has hit out at the FAI for scheduling a 2pm kick-off time for their FAI Cup first-round tie with Treaty United at Markets Field this Sunday.

The Lilywhites played out a pulsating 2-2 draw with FCI Levadia Tallinn in the Europa Conference League on Thursday night prior to what is a quick turnover against Treaty.

Perth has confirmed that Dundalk did seek a change of kick-off time from the governing body ahead of this Sunday afternoon’s match at the Limerick venue, but to no avail.

“It’s a three-and-a-half-hour journey from our ground in Oriel Park,” he told reporters.

“We’ve to go down to Limerick, so we’ll have no chance of having a pre-match meal. We asked for a later kick-off time and we’re very disappointed in that because the FAI Cup, for me, should be right up there in terms of priorities.

“I think we’ve been a little bit hard done by on that, but we’ll prepare properly. We’ve watched them last week and we’ll be ready for Limerick.”

As was the case against Levadia on Thursday night, Michael Duffy will sit out Sunday’s match in Limerick due to what has been described as a ‘medical issue’ by Perth.

“I lost him yesterday (Wednesday) through a medical issue,” explained the Dundalk head coach. “I have to say this because I’m accused of different bits and pieces in terms of the media. That’s a personal health issue, so it’s up to him to say he has Covid.

“I really respect journalists. I think that’s fair, but I think it’s up to him to say he has Covid. I understand you have a job to do. You have to be careful with people’s health.

“I done a press conference three weeks ago, I came out of it and we’d ten players out with Covid. I’m just trying to be fair with people’s health and families. If people think there’s Covid in our group, they get worried.

“Thankfully, we’ve an absolute isolated case so we’re good in that sense. He was re-tested and we’re hoping it’s a false positive, but I expect it’s not going to be.”

Currently third in the First Division table, this will be Treaty’s first ever meeting with Dundalk, who lifted the FAI Cup trophy for the 12th time in their history in 2020.

Dundalk haven’t fallen at the first hurdle in the FAI Cup since 2010 when they lost 1-0 to St Patrick’s Athletic at Oriel Park, with Brian Cash scoring the only goal of that game.

The Lilywhites have reached at least the quarter-final stage of the competition every year since then, making it to the final at the Aviva Stadium in each of the previous six years.

Dundalk’s game with Treaty is available to watch via the LOI TV streaming service.