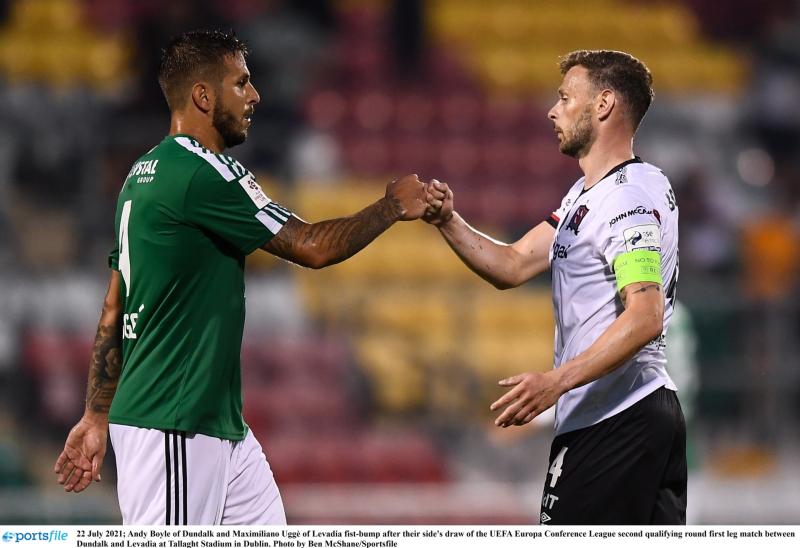 The Europa Conference League tie between Dundalk FC and FCI Levadia Tallinn is firmly in the balance after the sides played out a pulsating 2-2 draw at Tallaght Stadium.

Bogdan Vastsuk twice put Levadia ahead in the first half, but both goals were cancelled out by Will Patching and then David McMillan, who added to his record tally in Europe.

The second half didn’t produce any more goals from either side, but Dundalk will be somewhat confident going into next week’s return at the A. Le Coq Arena in Tallinn.

Things could have been very different, however, with Levadia taking the lead inside two minutes when after some neat play from the Estonians, ex-Manchester City trainee Ernest Agyiri raced down the left flank before finding Vastsuk, who made no mistake.

Dundalk responded well to that early concession and found themselves level barely a minute later in what was an explosive start to proceedings in Tallaght, with the ball breaking luckily for Daniel Kelly, and he pulled it back for Patching, who finished beautifully into the bottom left-hand corner to score his second in Europe this year.

Wilfried Zahibo replaced Michael Duffy in what was Dundalk’s only change from their win over Newtown AFC in the last round, and the ex-Valencia man’s misplaced pass allowed Agyiri a chance to shoot, but Alessio Abibi pushed his effort around the post.

Levadia restored their advantage on 19 minutes when a slick one-two between Marko Putincanin and Zakaria Beglarishvili sent Vastsuk through on goal, and the Estonian international calmly lifted the ball the over the outrushing Abibi to make it 2-1.

McMillan’s header was easily kept out by Levadia goalkeeper Karl Andre Vallner before Kelly, completely unmarked, diverted his headed effort wide of the target soon after.

The Lilywhites restored parity on 27 minutes as Patching and Raivis Jurkovskis both combined on the right before the latter played it into the path of McMillan, who turned Frank Liivak before finishing to score what is now his 13th goal in European football.

Patrick McEleney’s audacious shot from outside the box wasn’t troubling Vallner and sailed over, while a minute before the half-time break, Patching had what looked a reasonable penalty appeal waved away after going down under the challenge of Vastsuk.

Shortly after the game resumed, Abibi did really well to get his body behind Beglarishvili’s shot, but the second half failed to live up to the first in terms of action.

Dundalk did have chances to take a lead to the Estonian capital next week, with McEleney’s shot being deflected wide before McMillan headed off target from Patching’s corner, although he looked to have been pushed by Liivak, but no penalty was given.

Greg Sloggett fired a shot wide, while Sean Murray – who scored three goals in Europe last season – headed off target after getting on the end of a Jurkovskis whipped cross.

Dundalk almost won it in stoppage-time when McEleney brilliantly skipped the challenge of a couple of Levadia defenders before forcing Vallner to push over.

Both teams will feel they have a reasonable chance of progression going into next week’s second leg, with Eredivisie side Vitesse Arnhem awaiting the winners in the next round.