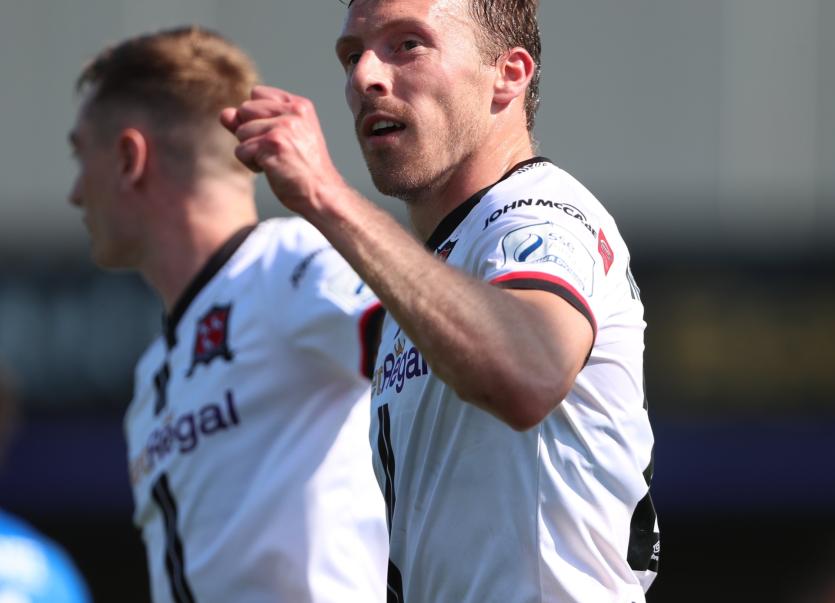 The first leg of the second-qualifying-tie will be played in front of 1,000 spectators at Tallaght Stadium – a place which has been a happy hunting ground for Dundalk and in particular McMillan, who famously scored a brace there against BATE Borisov in 2016.

The 32-year-old’s goal against Newtown AFC at Oriel Park this season was his 12th in European competition, in which no League of Ireland player has now scored more times.

“I think probably since the back end of last year, I think any time I’ve played, my goal record in particular has been good, has been strong,” he said at a presser this week.

“I was frustrated at the beginning of the season not to be playing more often. You’ve got to keep yourself ready when the opportunity comes along.

“It’s been a tough period for Pat (Hoban) to be out. When the opportunity has arisen, I’ve just got to be ready to go and thankfully I’ve been amongst the goals. I will try to help the team as much as possible and hopefully that can continue on Thursday.”

McMillan has also been among the goals domestically of late for Dundalk, and he scored the winner in last week’s 1-0 win over Finn Harps in the SSE Airtricity League at Oriel.

The win moved The Lilywhites up to sixth in the table, four points behind fourth-place Bohemians and possible Europa Conference League qualification again for next season.

“It was a very promising performance,” added McMillan.

“There was a lot of really good opportunities created in the first half and certainly from a striker’s point of view, it was really good to see.

“It wasn’t just myself, but even the full-backs and midfielders were all getting opportunities to score. We would have been happier if we were three or four-nil up at half-time, but even so, it’s good to be creating those chances.”

Vladimir Vassiljev’s side come into this tie top of the Estonian League after 17 matches and have already disposed of St Joseph’s (Gibraltar) in the Europa Conference League.

“We’re just trying to do as much homework as we can really before Thursday. They seem to be a good attacking team, who are scoring a lot of goals in their league and winning a lot of games.

“They seem to be quite an aggressive side. We’re at home on Thursday, so we want to try and win the game and give ourselves a good chance to progress.

“Being at home, we’ll try and go out there and have a go. From what we’ve seen of Levadia, I think they’ll do something similar. They set up to attack and try and score goals, so it should be an open game.”

Thursday evening’s game is to be refereed by Miroslav Zelinka (Czech Republic) and will be streamed live via the subscription-based LOI TV platform, with passes costing €10.