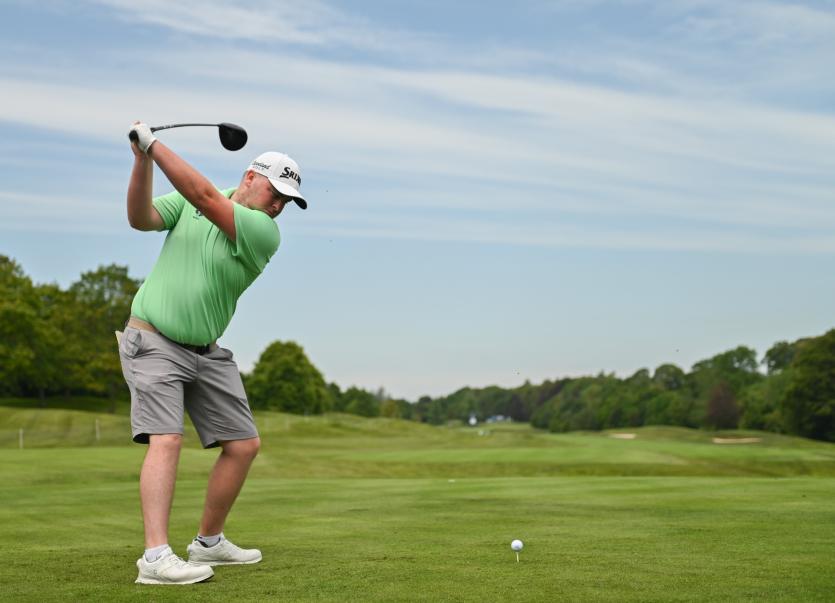 Caolan Rafferty hits a drive during a practice round at the 2021 Irish Open. Pic: Ramsey Cardy/Sportsfile

A Little two week ago all that was worrying top amateur golfer Caolan Rafferty was maintaining the lush fairways of Dundalk Golf Club, where he works as a greenkeeper.

The fact the elite of the golfing world were descending on Kilkenny for the Irish Open, watching it on TV was as far as his connections with the event were going.

But in a stroke of luck, the man who was as high as number Two on the World Amateur Rankings last year got an extremely late invite to play in the event staged this year in Mount Juliet, a course he was familiar with having played some club golf around the popular Kilkenny venue.

“It was great to get the call when the Irish Open team rang me, it is always nice to play a Pro event” he exclaimed. “To be able to play the Irish Open, in a place I know a good bit about as I’ve played it a couple of times, it was nice to get this opportunity for my first Pro event.”

“We played club Matchplay here a couple of years ago when we were in the Leinster Senior Cup Final, we had plenty of practice rounds and of course a couple of matches here so I knew the layout quite well.”

It is one thing strutting your stuff against the best club players in Ireland, taking on the World’s elite was another thing entirely.

Despite his course knowledge, the 28-year-old struggled to get going and despite a couple of early pars any chances he had of making the cut were undone in a short span of holes.

“it was tough” he admitted. “The Course was set up tricky and I just didn't play the way I know I can which caused a little frustration, but at the same time if you haven't got your best game it will catch you out.”

“I got a little unlucky for my first bogey and then hit a poor shot which led to a double bogey. Then I hit a few lovely shots on 15 and 16 and didn't get the putts.

“That was a bit of a killer because I could have kicked on from there. I grinded quite well to keep the score at three over and then just made one mistake and it cost me badly.”

He went on to card two birdies in his first round, but two poor holes late on left him at six over, a million miles away from the leader who was shooting a staggering eight under 64. That left him needing a miraculous second round to be within the ten-shot rule and make the cut.

In the end it was three under that needed to be hit to make the cut and despite giving it everything, the former Walker Cup golfer just couldn’t get it going.

He joined a long list of high-profile names such as Ryder Cup captain Padraig Harrington, his playing partner Eduardo Molinari, Eddie Pepperell and Thorbjørn Olesen by heading home before the weekend.

While the week may not have planned out the way he was hoping for, Caolan is not looking at the negatives from the tournament, feeling there was plenty for him to grasp at following a rare chance to test his skills against the Pros.

“I have plenty of positives to take from it. I would never let my score annoy me at that level. I enjoyed every minute of it and learned a lot from it. My scores weren't great, but I still hit a lot of decent shots.”

“The course setup is tricky with tougher pins, and you have to be coming from the right places to get at them so that was the toughest part.”

Rafferty has done all there is to do while plying his trade in the amateur game, you don’t get so high up in the world rankings without beating some of the best in the sport.

With his main ambition of playing Walker Cup golf achieved, questions on if he ever plans to turn pro are never that far away, particularly after being controversially omitted from the 2021 edition held recently in the US.

He will not let this week overly effect his eventual decision, instead focusing on his current job as a greenkeeper while just letting himself enjoy whatever golfing adventures that 2021 and beyond may hold for him.

“I'm just going play the rest of the year out. I wouldn't let that one event decide what I am going to do for the future. Getting to play a few of them would be ideal and then see if I'm good enough or not. It wouldn’t make me decide just yet.”

“Last year Covid affected me going to Q School at the end of the year, it has been cancelled again this year, so the immediate future is very much up in the air. It is tough to make that decision with everything that is going on.”

“The amount of Pros who turned last year, even the year before to an extent that never got their opportunity, they are all going to be waiting ahead of you. I’m just going to play it by a year and see what happens, I’m not going to rush any decision and feel like I have to make it now.”