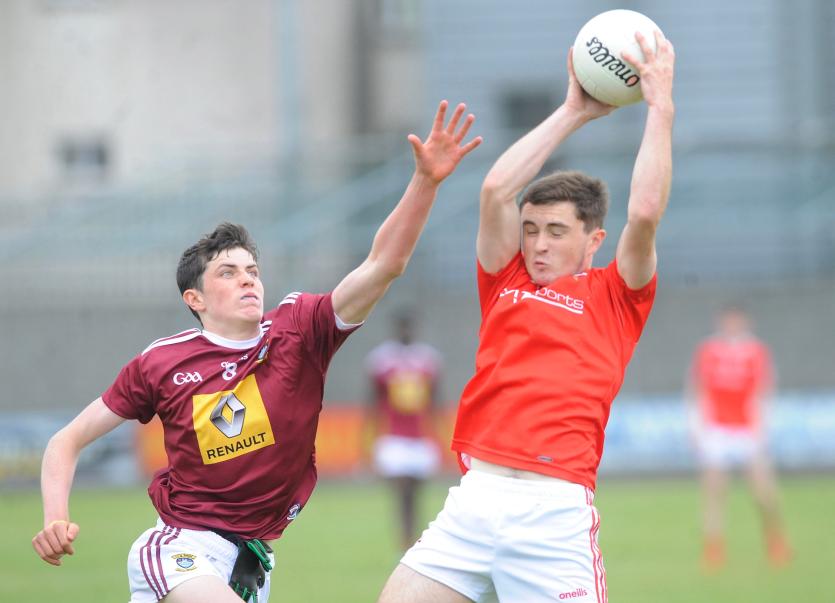 They were the first Louth team to get their Leinster campaign underway, a few days later they were only team left in with a shout of provincial glory as both the Senior and U20 county sides exited the championship.

Now it’s left to Arron Hoey and the Minors to represent the county jersey with pride, as they welcome Laois to Stabannon (Throw in 12 Noon) on Saturday with the hope of booking their place in the quarter finals.

The Democrat looks back on the performances of both the Wee and O’Moore Counties, to try and help you decipher their chances of success.

It was an away day in Mullingar that got Louth underway this year, as they made the journey to the Midlands to face Westmeath in Cusack Park. After only four minutes they showed that they meant business on the day.

A high ball from Gerard Hanlon into target man Domo Akin caused enough consternation that it broke to the on rushing Seán Reynolds, who popped a hand pass to Liam Flynn at the back post. With time and little space, Flynn checked onto his left foot and finished low to the net.

The Men in Red built on the goal, defending resolutely, funnelling men back to make tackles at will, which made life tough for the home side when it came to scoring from open play.

Some sloppiness after the first water break looked to have ended the visitors momentum, only for them to strike a second goal just as Westmeath were gaining control.

Fionn Cummiskey picked up possession in open space on the wing and the Kilkerley man showed great composure to keep the ball until the pass was on. A little hand pass over the top opened up the space for Kieran McArdle who drove the ball into the net on 21 minutes.

Goals will win you games is a tired and overused cliché, but the 2-5 to 0-5 cushion is exactly what Hoey’s young guns needed to push into the second half full of confidence.

Tracking men back, passing and moving, and showing great understanding while doing so, Louth were able to dictate the pace of the game and comfortably defend their lead. They were by far the better team in the second half which was very scrappy, keeping Westmeath off the scoresheet for 18 minutes.

A third goal late on put the tie beyond doubt, Dangerous Cooley corner forward Gerard Hanlon bore down on goal and with supreme vision and wherewithal picked out Liam Flynn at the back post for the simplest of tap in’s. A well deserved 3-10 to 0-10 victory, their job done in emphatic style.

While the Wee County victory came with relative ease, for Laois it was a titanic struggle at home to Wexford. They had to overcome losing two men, fight their way through extra time and then take on the Yellowbellies in a dreaded penalty shootout. Not a game for the faint hearted.

The Home side started strong, despite playing against a stiff breeze they got the opening two scores and were 0-3 to 0-1 up at the water break, yet mistakes were already creeping into their game and Wexford controlled the second quarter.

They hit five points in a row, while at the other end the usually reliable Kieran O’Donnell was wayward from a series of frees that were very scorable.

Things went from bad to worse for the O’Moore Men when 31 minutes in they were reduced to 14 as wing forward Jack Byrne was sent off with a straight red, having retaliated on the Wexford defender seconds after actually winning his side a free. They trailed 0-6 to 0-3 at half time.

With three yellows and a red already to their name, Laois needed to get their act together, however on 41 minutes they were another man down when Cathal Lee was given his marching orders.

Two more scores left them 0-8 to 0-3 down and the home side looked a beaten docket, but to their credit they showed extreme commitment and spirit to eke themselves back into the contest.

Remarkably they hit the next five scores courtesy of the likes of Kieran O’Donnell, Sean Brennan and Cormac Murphy to trail by just a single point by the second water break.

From here the final quarter was an epic battle, Laois remaining resolute and bagging the equaliser on 59 minutes before taking the lead with a further score deep into injury time.

At this stage nothing could surprise you in this contest, Wexford pointed on 63 minutes to level proceedings and missed a chance at the death to win it resulting in the tie going to extra time.

Restored to 15, Laois asserted their dominance, they lead by 0-11 to 0-9 after the first period of extra time, while a further goal with six minutes to go from Cormac Murphy had the home side four in front. Surely all over at this stage?

Under immense pressure, the Yellowbellies hit four in a row leaving the tie to be decided by penalty kicks. Laois goalie Conor Brown was the hero, saving two and scoring another as the O’Moore men marched into the next round.

It’s clear for all to see that the two teams have had polar opposite experiences when it comes to their opening rounds. Louth were able to brush off the challenge of Westmeath through building an early cushion, Laois on the hand had to dig deep into the reserves to ultimately prevail.

When Aaron Hoey’s troops got the run on the Midlanders, they were able to manage the game well before slotting home a third goal which put the contest beyond their opponents. The O’Moore County have shown they can rally back from adversity so wouldn’t be phased by a strong start from Louth.

While their workrate to get back into the game is admirable, their discipline could be a problem again. Louth were able to cut through the Lake County when going 15 on 15, who knows what they could do with an extra man.

Maybe it is a case that Laois will be battle hardened, they had to bounce back to even get a result while for Louth it came so easy to them. What will Louth be able to produce when their back is against the wall? A period of sloppiness like after the first water break in Mullingar could be pounced upon a lot more then two weeks ago.

Or Have Laois ridden their luck, put all their energy into that game? They’ve had two weeks to rest up so should be willing and ready for another big game, however you can’t forget they were a drop of a ball away from exiting the competition.

With it being an all or nothing contest, you can expect the game to be another hum dinger of a fight, but if Louth do get another strong start will Laois be able play there way back into contention for a second game in a row?