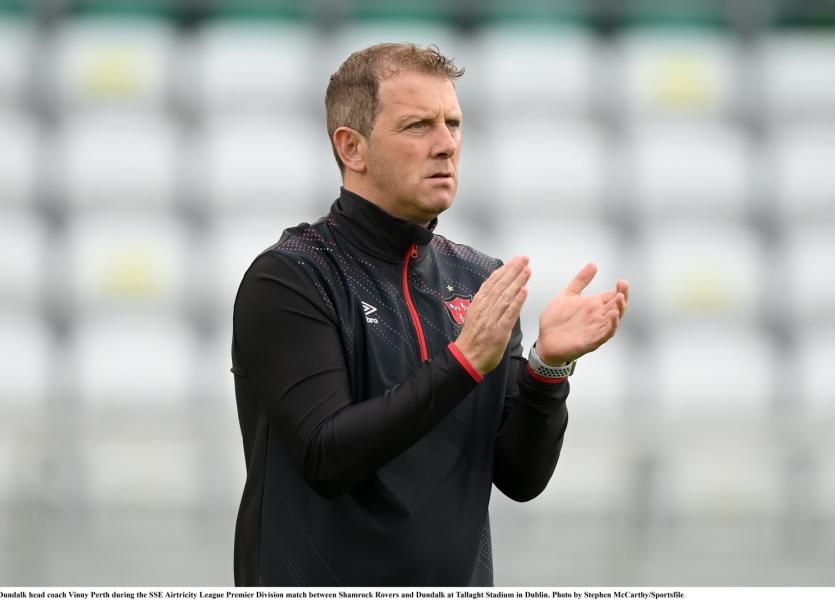 Dundalk FC will be missing several first-team players for Thursday evening’s Europa Conference League match against Newtown AFC due to a Covid outbreak at the club.

Newtown manager Chris Hughes confirmed to The Democrat over the weekend that the Welsh side were to be without at least four players due to their own Coronavirus issues.

However, Dundalk head coach Vinny Perth disclosed that a number of players would miss Thursday’s game at Oriel Park (kick-off, 5.45pm) in the wake of positive test results.

“We have some issues in our own camp in relation to Covid which has broken in the last couple of hours,” said Perth at Wednesday’s presser, which was conducted over Zoom.

“When we all arrived at the ground this morning, the only players I had out was Brian Gartland and Dan Cleary. I’m waiting for an update from our doctor at the moment in terms of who’s available for tomorrow. We’ve got some issues around that.

“They’re personal issues first and foremost, so we won’t release any names at the moment or anything like that. They’re all personal to the people involved.”

After coming out of a period of self-isolation on Monday, the Newtown squad arrived into Ireland on Wednesday ahead of the first leg of their first-qualifying-round tie.

The side that finished seventh in the Welsh League last season are the joint lowest-ranked team in the competition, but Dundalk’s preparation has been far from ideal.

“We have a lack of information on the opposition because they haven’t played in so long and they haven’t had loads of pre-season friendlies,” said Perth.

“Covid issues on both sides of the water haven’t helped, but we’ve done a huge amount of work on them in terms of off the field. They’ve got some good players.

“We’ve got a limited amount of video on them, but we’ve watched it and we’ve prepared as best we can. The team is in a difficult position because of all them issues. We’re ready for the game.”

Across two spells in charge, Perth has lost just once at Oriel, while The Lilywhites haven’t lost a European match at the Dundalk venue since Hajduk Split won there in 2014.

It’s been just over three weeks since Perth returned to the club that sacked him less than a year ago, and a brief upturn in form was ended at Shamrock Rovers last Friday night.

Patrick Hoban’s first-half opener was cancelled out by wonder strikes by Liam Scales and Sean Gannon, while Aaron Greene sealed the points for Rovers 15 minutes from time.

“I think there’s been positivity in our performances,” added Perth.

“We’ve had two weeks back at the club and we’ve had two wins, a draw and a loss. I think we showed that the team is willing to fight and give everything on the pitch and for the jersey.

“I think the performances will improve over a period of time when we put some structure back into the team. I felt we were really unlucky the other night.

“The game plan for the first 30-35 minutes worked and the big moment went against us in the game the other night. There was lots of positives to take from it and we move on.”

In addition to Brian Gartland and Daniel Cleary, Dundalk could also be without Greg Sloggett against Newtown after he picked up a back injury in the defeat to Rovers.

Thursday evening’s game is to be refereed by Luca Barbeno (San Marino) and will be streamed live via the subscription-based LOI TV platform, with passes costing €10.