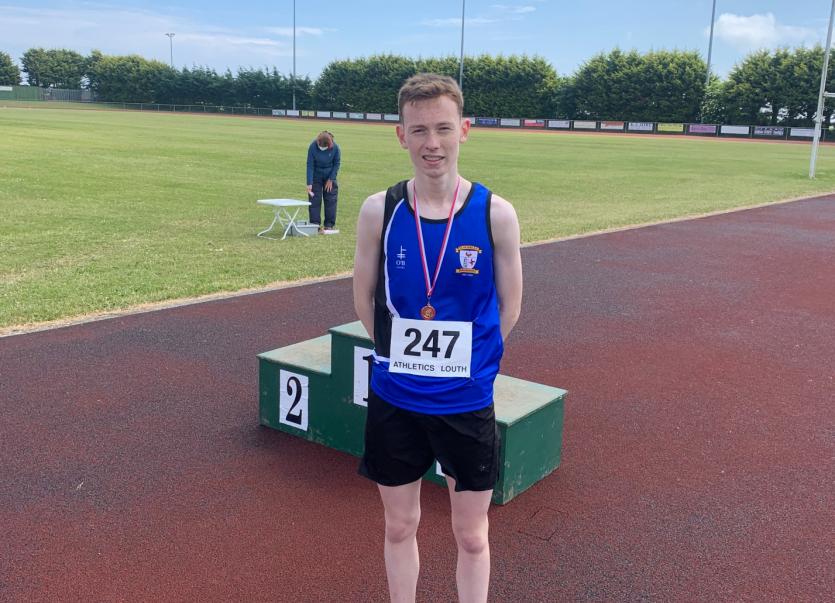 It was another busy weekend for the St Peters AC Club with athletes in action both on Saturday and Sunday. On Sunday it was day Three of the Louth Track & Field Championships.

Sean Reilly was the stand-out performer for the club as he completed the middle distance Championship double when he added the U16 800M Gold to the 1500M Gold he won last week. The young runner led from the gun and was never in any trouble as he cruised to victory.

Mia Finnegan was once again amongst the medals, having won silver last week in the U14 Javelin she returned this week and stood proud on the podium winning the silver medal in the U14 shot putt. She also had a good performance in the 80M sprint reaching the final.

Dearbhla Allen had a strong run in the U15 girls 800M, running particularly well in the 2nd lap to claim the bronze medal in a very keenly contested race .

Orla McLaughlin, who is a very good all-rounder was unlucky not to come away with more medals having finished fourth in two events but held her nerve to win a bronze medal in the U14 girls Long Jump.

The club had strong performances in the U13 600M race with Hannah and Emily O’Reilly both in the battle for medals on the home straight just to narrowly miss out.  Deirbhile Morgan also battled well in the same race as did Laura Duff in her first track race.

On Saturday the club had three athletes compete at the National Junior Championships in Santry. Niamh Brady was first up as she took her place on the start line the women’s 800M which was a straight final.

She had a strong run to finish in sixth place, considering Niamh can run this race for the next three years she can be happy with her performance.

Cian Gorham and Rory McLoughlin also lined up in the heats for the junior men’s 800M. Cian went in heat one which was a real tactical race, he had a strong finish and finished 2nd earning a place in his first National final.

In the final Cian didn’t show any fear to his older competitors and give his all finishing in sixth place, but once again for the third time in a row he finished with a sub two min time of 1.59.

Rory McLoughlin went in heat two and although he didn’t get a great start he battled well and missed out on a final place by a fraction of a second. All three athletes are still just sixteen years old and showed great courage and ability against their older competitors.