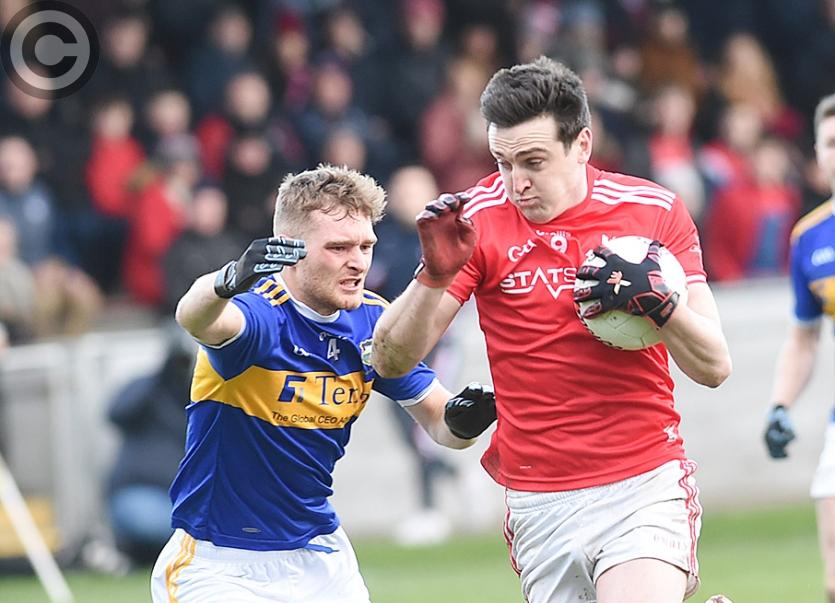 Wayne Kierans is reluctant to brand Sunday’s National League encounter with Offaly as a relegation four-pointer, despite both sides struggling towards the base of the Division Three standings.

Louth remain the sole pointless team in the third tier following round two, where The Reds suffered a traumatic, single-point defeat by Tipperary in Drogheda.

The Faithful, on the other hand, visit this weekend buoyed by a late surge which saw them rescue a share of the spoils with Longford in Tullamore, and having also sampled victory at the Gaelic Grounds in this season’s O’Byrne Cup.

“There’s only seven games and so they’re all important,” Kierans told The Democrat.

“If you want to say one’s a four-pointer, we don’t really look at it like that.

“Offaly are going to be tough; we saw that in the O’Byrne Cup, but it’s a really difficult division, whether you’re trying to stay up or get promoted. All we can do is try and recover as best we can and replicate the performance (versus Tipp) against Offaly.

“We can’t get relegated or promoted next weekend, we just have to put in another performance and make sure we get the win.”

Some Louth players trudged off last Sunday wearing the guise of beaten men, yet their manager is confident of reviving their optimism approaching the third round outing, insisting there will be no lack of effort.

“There’s always a lot of negativity surrounding us anyway, because of the results over the years, but they’re good lads, they will recover,” he added.

“They train really well, but if we just get a wee bit of luck. We got a wee bit of luck today with the goal, I thought it might have been the break we needed, but we just need to keep fighting; the boys will fight and we’ll all fight.

“As I’ve said to the boys, if we replicate that performance, dotting the Is and crossing a few Ts, we will get the win we deserve.”

On the possibility of injured players recovering in time to oppose John Maughan’s outfit, Kierans declared Declan Byrne as the most likely to feature.

“We lost Burnsy (Ryan Burns) the other night at training, which was another blow. (Declan), if there was no game next weekend we probably could have risked him, but the fact that there is we said ‘no’, there was no point in risking him.”