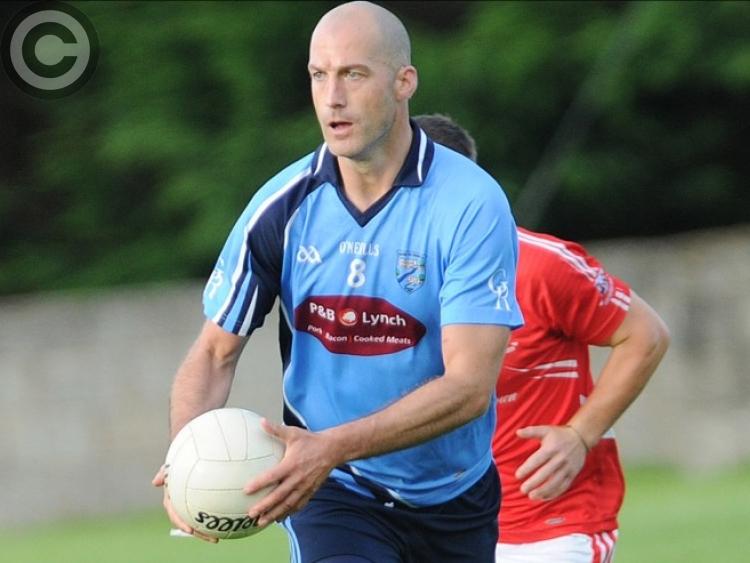 Manned boats have been known to disappear in the vicinity of the Bermuda Triangle, its mystery still to be comprehended. Size fives have often done likewise in Tallanstown.

Disciples of ‘keep it away from Devaney’ or ‘kick it to the other wing’ surface when the Galwegian lines out at midfield. ‘Keepers are often the receivers of such advice, for the ball usually ends in the one place when David Devaney is around; between the palms of his hands, vice-grip like.

For 15 years it’s been the same. A typhoon in sky blue sweeps through, taking possession, and a few stragglers with it.

“Whatever I’m lacking in the legs I might make up for in experience, or maybe it just looks like I’m coming out with the ball. I probably stick out because ‘I’m tall, skinny and 40 years of age.’”

Glyde Rangers take to the field for Sunday’s junior final seeking a first championship title since last landing Christy Bellew, in 1996. Devaney is chasing a championship medal - his second - at the ripe, old age of 40.

He speaks at his place of work, Dundalk Garda Station, where the “slagging is mighty” considering a few of the locals will sport the green and black of Young Irelands this weekend.

The place is humming, as is Tallanstown.

“It’s huge. I remember when Galway won the All-Ireland in ‘98 it was huge for the county, huge for the area, and when you bring that down to a local level it’s the exact same. The bunting is all up.

“Last year was the first time we had bunting and flags up for the guts of 20 years because we hadn’t been in finals. It’s the same this year, it’s great to see people getting their colours out and there’s a bit of craic about the village; everyone’s talking about the game.

“It gives a great lift to the place. I know Tuam was bigger, but I don’t think it’s any different really.”

Since Glyde lifted the junior title 22 years ago, they have spent quite a bit of time operating in the senior ranks, going close to the peak on a couple of occasions without taking the steps to a Joe Ward decider.

They had a ‘golden generation’, the Sheridans, the O’Briens, Devaney, etc.

“We were probably never quite good enough to win a Joe Ward, or just never got the rub of the green. There was 14 or 15 years of us being senior, without getting to any finals,” he says with honesty, and perhaps some regret.

“I suppose, traditionally, Glyde Rangers would have been an intermediate/ junior club. Some people might feel that we’re back to our traditional standing.

“Lads retire, get old and move abroad, and that’s where we are now. We lost a lot of players, you really only have myself, Conor (Sheridan) and Trevor (O’Brien) from that era and we’re just trying to get a new generation going.

“But this is the strongest we’ve been in the last number of years. The Morans (Kevin and Gareth) have been huge additions and Gavin Duffy from Cavan. The young fellas are getting older and wiser, but the two Morans have been fantastic additions from last year and we’re definitely stronger than we have been this last couple of years.”

Retirement calls have been made on a few occasions, some of which were spurred on by family commitments and looking after his four kids. But a movement always came entering the summer, with Glyde’s deficit of players leading to his annual return, accompanied by Devaney’s desire to get back on the field. Medals were never the main motivation.

“If guys stopped playing because they weren’t winning medals then nobody would be playing.”

He is thinking about Sunday, about what it would be like to get over the line. He is confident.

“You’re thinking about it all the time. I hope we’ve learned from last year. We have to go and get it. It’s there for us to win; hopefully, we will.”

Their template is that of Glen Emmets, the team who beat them last year, themselves having wintered in the bridesmaid dress a season earlier.

And maybe history will repeat itself, with Glyde returning for glory. We would then see if Devaney can handle silverware like he can the ball.