Bradford City and the making of an FA Cup giant-killer 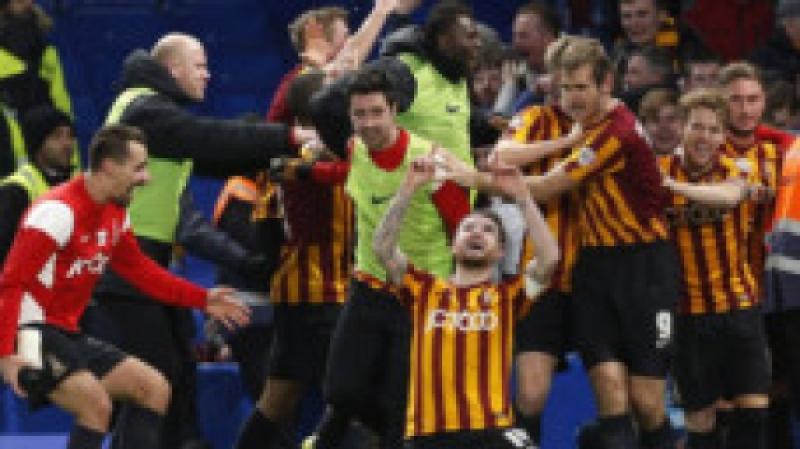 Lazarus of Bethany is one of the most prominent stories in the Gospel of John section of the Bible. It tells of a man who Jesus Christ restores to life after four days of death. Unfortunately, the miracle of Lazarus hasn’t got anything on Bradford City’s FA Cup win against Chelsea on Saturday afternoon.

Lazarus of Bethany is one of the most prominent stories in the Gospel of John section of the Bible. It tells of a man who Jesus Christ restores to life after four days of death. Unfortunately, the miracle of Lazarus hasn’t got anything on Bradford City’s FA Cup win against Chelsea on Saturday afternoon.

At 2-0 down after just 38 minutes against Jose Mourinho’s men, no one would have believed what was to follow as the League One side somehow, someway, joined Barcelona, Atletico Madrid, Basel and Sunderland as the only sides to beat a Mourinho-coached Chelsea side over 90 minutes at home. They didn’t squeak through on penalties or with a fluky extra time winner. No, Phil Parkinson’s side hit four – yes four – without reply: Inexplicable.

Bradford have previous for these sort of antics. Only a couple of seasons ago they deservedly beat Aston Villa over two legs to reach the Capital One Cup Final, accounting for Arsenal and Wigan along the way as well.

Sheffield United have also become something of an infamous giant-killer over the last two seasons, finding themselves in the semi-finals of the League Cup once again this year.

The shocks came thick and fast over the weekend as top side upon top side unfathomably went crashing out and unfathomable is, without a doubt, the most operative word.

Take Bradford for instance. How do you begin to explain how a side 49 places and hundreds of millions of pounds in quality below Chelsea can go to Stamford Bridge - the most difficult ground in England - to get a result and score four on the bounce to beat such a side?

Or how Cambridge – 13th in League Two – can so comfortably hold a side containing the likes of Di Maria, Falcao, Carrick and Blind and then go back to relative mediocrity by losing every other week?

Psychology has taken on a hugely important role in modern football with it being attributed to a number of recent success stories. Dr Steve Peters’ work last season with Liverpool is credited with being a significant factor in their title charge. The biochemistry behind that psychology is also quite interesting.

In an interview with Paul Watson back in 2012, sports psychologist Daniel Abrahams stated: “When you feel a part of a team, a chemical called oxytocin is released, just like when you are in the pub with your friends and you get that sense of elation.

“This chemical, combined with the release of lots of adrenaline and dopamine makes players feel psyched up and focused. It’s the perfect combination for a team looking to pull off a cup shock.”

Abrahams, who has worked with a host of Premier League stars, believes the expectation of winning can cause the bigger sides to lose focus in such matches.

“The key thing for players is to get into the intensity sweet spot where they can compete with intelligence and focus,” he said.

“It is an enormous challenge for the bigger teams to adapt to the change of playing in a game that they are expected to win. Subconsciously or consciously, they either take winning for granted or just aren’t that motivated to win, as there isn’t that element of challenge.”

He explains that lower level teams experience precisely the opposite prior to a cup tie.

“They see the game as their big opportunity and feel that they have nothing to lose. Some may feel fear but generally the underdogs will play with freedom and enjoy themselves in that environment.”

Some may be inclined to dismiss those ideas as hogwash but when you truly consider the weekend’s events – particularly at Stamford Bridge – even the most ardent cynic would be forced to relent.

Bradford City – so often the dopamine-induced underdogs in these situations – tapped directly into that mindset as Chelsea’s star-studded squad suffocated under a blanket of big-headed superiority and folded.

The FA Cup would be all the better for it.