News of promotion filters through to Station Road - 2008 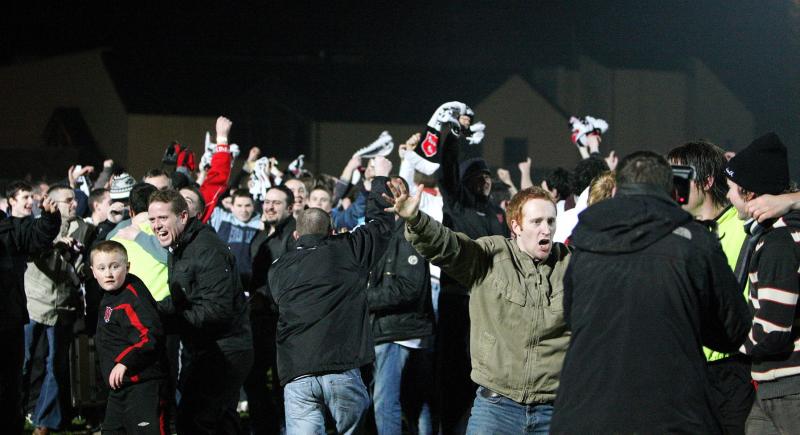 The moment it became known that Dundalk FC’s seven-year stay in the First Division was over brought with it a reaction which will remain with the almost 1,000 supporters who made the journey to Station Road, Kildare in 2008.

It had looked as if John Gill's third crack at getting the Oriel Park side back into the Premier Division would fall short despite their final day, 6-1 walloping of Kildare County. Shelbourne were on course to defeat Limerick 37 and pip them to the only promotion place.

Dundalk's match had finished as events at Tolka Park continued. Some of the crowd had even trickled away from the Kildare venue, while others felt anger which stemmed from the frustration of spending another campaign in the abyss.

But Colin Scanlon - a Limerick substitute - intervened in Drumcondra, equalising in the dying embers to drastically alter the fortunes of Dundalk FC. News quickly filtered through to Kildare. Some listened on radios, breaking the news to others and so there was an incredible breakout of celebration. That moment, when the hundreds began to celebrate, is one of the club's all-time, standout moments.

Without the dramatic turnaround, would all the success of recent years have been possible? It’s highly doubtful.