Gasps heard as floodlights turned on for Vasas game - 1967 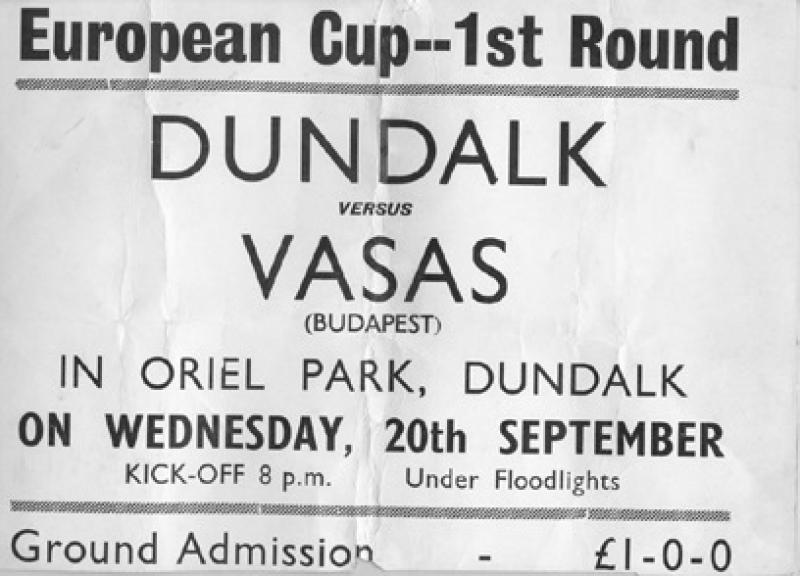 Programme from the game.

The significance of playing in floodlit conditions is taken for granted these days. Indeed, most of Dundalk’s matches are now played on Friday night, contrary to the Sunday afternoon timeslot of old. However, when the club first played under lights at Oriel Park, it drew a significant reaction.

Dundalk faced Hungarian giants Vasas Budapest in the first European Cup match to be played on the Carrick Road, a revamped Oriel with the pitch having been turned around.

Despite the visit of a Vasas side which included a team of internationals, the most significant part of a memorable night was the official switching on of the lights, which drew a gasp from just about everybody who was present. That moment, when the lights were turned on, is among the club’s most memorable.

The match saw The Lilywhites succumb by a single goal, Vasas taking the lead in the second half, while the second leg ended with an 8-1 loss despite an admirable performance.

However, that tie will always be remembered for the first leg performance, which The Democrat described as: “A game to be remembered and the players deserved the tremendous ovation they received as they left the field.”
Though, the switching on of the lights drew a reaction which will be forever significant.