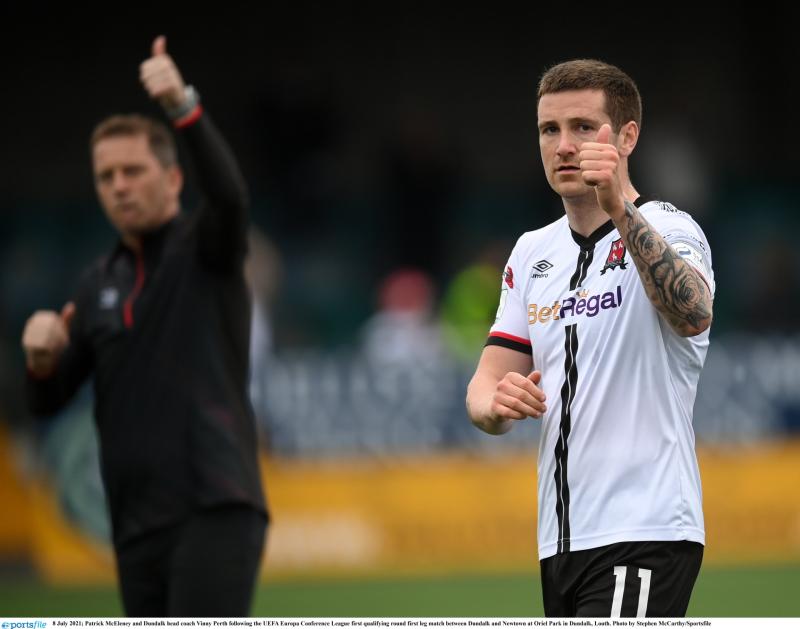 Derry City bound Patrick McEleney says he’s leaving Dundalk FC at the end of the season due to ‘non-footballing’ reasons, but is only focusing on The Lilywhites until then.

The 28-year-old, who got the winning goal in Dundalk’s 1-0 FAI Cup win at Treaty United on Sunday afternoon, has signed a two-year pre-contract agreement with Derry.

“It’s just things away from football, it’s just one of them things and it had to be done,” McEleney told Democrat columnist Gerry Malone after Sunday’s win at Markets Field.

“I’m a Dundalk player at the minute and that’s all that matters to me. I’ve given everything for the club and I’m sure everybody can see that and that will never change.

“I’ll just keep my head down and keep working hard. I’ve been here now five, six years and I love the club, so I’ll be doing everything I can for the club.”

Vitesse Arnhem, who finished fourth in the Eredivisie last season, await the winners of this tie in the third qualifying round in what would be a mouth-watering pairing.

The first leg against Levadia at Tallaght Stadium finished 2-2 last Thursday, and McEleney is expecting a similarly difficult encounter in the Estonian capital this week.

“It’s going to be a tough game,” he said. “It was a really good game at home. They got their two goals and it took us a while to get settled, but we did in the end.

“We’re looking forward to it. We’re going out to win the game. They’re a really good side and they’re good going forward, but so are we. I think it has the makings to be a good game.

“There’s so much to play for. We go into the next round of the cup and we still have Europe to look forward to and we’ll try and get a big tie with Vitesse Arnhem.”

McEleney is no stranger to European competitions, and he was part of the Dundalk teams that famously reached the Europa League group stages in 2016 and 2020.