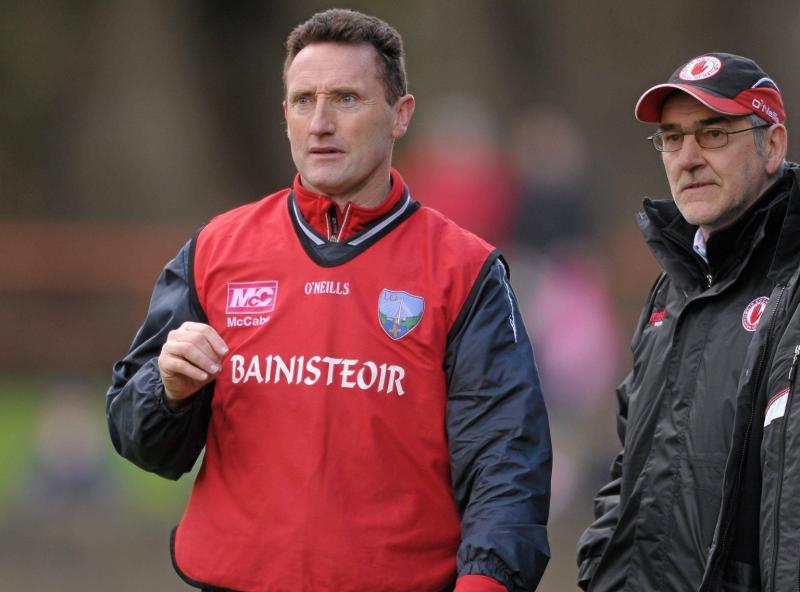 It has been a long time since there has been any sort of real excitement around the Louth Senior Football team, with the county now stuck in Division Four of the National League and the thought of even contesting a Leinster Final seen as a laughable suggestion.

And while the appointment of a new manager always brings some hope of a new dawn, rarely has an appointment been met with the enthusiasm and excitement that radiated from the words of current Chairman Of Louth GAA Peter Fitzpatrick as he spoke to the Democrat about Mickey Harte.

“We had a look at a couple of people and had been in contact with Mickey for a while, but he wanted a little time and space” stated the ambitious former player. “We chatted with him when he became available and the whole thing just took off.”

“The reason he is the manager of the Louth team is that he looked around as well and he trusted me in the information I gave him. Mickey Harte is looking to do something like he done in Tyrone in the 90s and the 00s where he done a fantastic job, we are looking for Mickey to do the exact same thing here.”

That success was achieved on foundations built through underage and Fitzpatrick is under no illusion that the job at hand is a long term project, with Harte and his team given three year contracts while also linking up with the U20’s set up as they look to build the Senior team from the bottom up.

“If you can start training and getting a system into the players when they are maybe 18 or 19, it has a snowball effect. Whether it is the development squad, the Minors, the U20’s or Seniors that they are playing the same type of football the whole way along and they know the system.”

“We appointed Mickey over the managements team, we have four new lads over the U20’s who have three-year contracts as well and appointed Colin Kelly over the development squads. We have big plans over the next couple of years and this is the first time in a long time that Louth will have the right structures in place.”

With such a marquee arrival now on the scene, there has been a significant uptake in players eager to get involved in the county set up with the Tyrone native having looked at over 100 players to date in Pre-Christmas challenge matches which has been whittled down to 44 over the new year.

Fitzpatrick has noticed a huge change in the age profile with the average age of a player dropping from a mid-thirties number to just 22 as the best the county has to offer make themselves available to the selectors.

“The uptake from players all the way up has been unreal, Mikey has given the whole county of Louth a lift. We needed to make sure all the best players made themselves available and over the last number of weeks since he was appointed they have all done so and Mickey has looked at everyone, putting a lot of time and effort in over the last couple of weeks.”

January would have seen more casualties to the squad as the manager, who won three Sam Maguire Cups while at the helm of his native county, got closer to finalising the 32 names that would make up his National League panel.

Unfortunately, the lockdown and Covid19 restrictions has resulted in no more collective training for inter county teams, but with the 2021 League still provisionally fixed for the third week in February Harte has his side working hard away from the pitch which as a former Louth manager himself Fitzpatrick was pleased to see.

“They have given each player an individual program to do over the next couple of weeks before they can get back to train collectively, whether it’s the gym set up in their homes or down in their local field within the five kilometres distance, the lads are working hard on their programs.”

“The fear I have at the moment is Croke Park might turn around and say we’re going ahead in two weeks’ time and it’s going to very hard to get a standard of fitness into players at such short notice so it is very important that these elite people keep themselves up to the standard needed.”

While the appointment was met with shock across the country, the former soldier and current TD was adamant that Harte was in for the long haul and looking forward to playing a role in the future development of football in the county.

“Mickey Harte is with Louth Football because he loves football, he has a connection with Louth and has always felt that it is a very proud county. He definitely is not there for the financial gain, he’s there for the love of the GAA and he wants to help Louth.”

With the future looking prosperous for all involved with the Seniors, Fitzpatrick was full of praise for the team his new manager has put in place and has set lofty goals for them to achieve in the coming years.

“I feel as though we have one of the best set ups in Ireland with Mickey and Co and the hope is it gives the players that extra confidence, I’m really looking forward to what 2021 will bring and it is just a pity it coincides with this Pandemic.”

“I just hope the people in Louth have the same vision we have. We want to put our stamp on things and be successful going forward with the big goal in the not so distant future being that Louth once and for all breaks the big duck and wins the Leinster Championship, that is the goal going forward.”