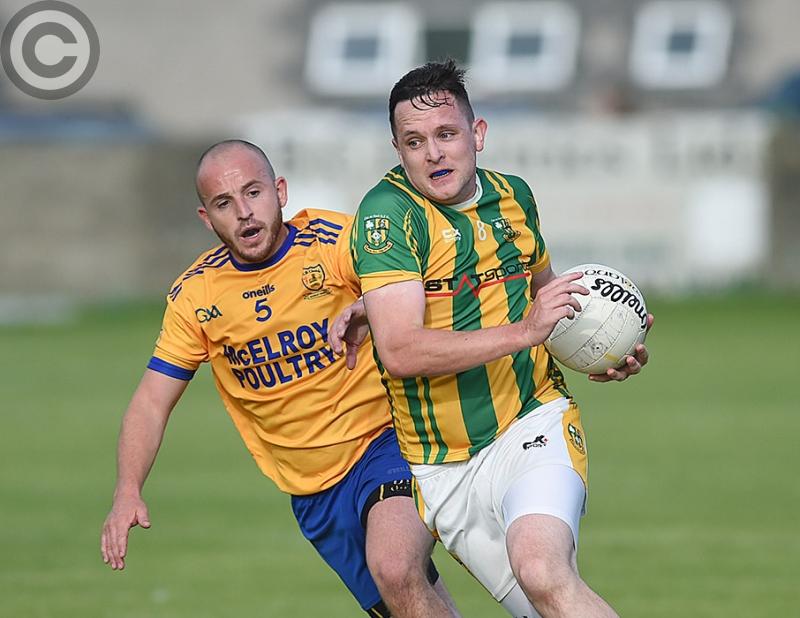 COOLEY KICKHAMS VS DREADNOTS
Dreadnots were perennial Cardinal O’Donnell Cup semi-finalists during the last decade and with a decider place at stake should they top their group, Colin Kelly’s charges will fancy their chances of reaching a third final in five seasons.

Cooley, with Gary Thornton back at the helm, are an unknown quantity, in truth, albeit they have home advantage here.

Declan McCoy’s Reds picked up some injury scares in their Haggardstown victory but provided they can retain their sharp forward edge, can win this game.

ST. PATRICK’S VS SEAN O’MAHONY’S
This clash of the green-clad foes in Lordship is incredibly hard to predict. Pat’s will have the advantage of a competitive game, against Naomh Máirtín in the Sheelan Cup, under their belt and that may prove crucial to the outcome.

Nonetheless, O’Mahony’s will have John O’Brien back fit and with another injection of youth, they’ll be bullish about what they can achieve over the weeks to come.

ST. FECHIN’S VS MATTOCK RANGERS
St. Fechin’s have been outstanding during this interrupted season, having reached the Sheelan Cup final. Eugene Judge’s charges look determined to make this a year to remember and a win over Mattock would be another step on the road.

Rangers were poor in defeat to St. Joseph’s in a challenge match some weeks ago, but an improvement is only to be expected. A possible game of the weekend.

The two best teams around on paper, The Jocks are seeking to reach a fourth successive Cardinal O’Donnell Cup final and if they’re to defend their title to the last round, a victory here could be crucial.

ST. MOCHTA’S VS ARDEE ST. MARY’S
It’s the game St. Mochta’s have long been waiting on as they mark their return to the Cardinal O’Donnell Cup with the visit of Mary’s, last year’s losing league finalists.

Injury doubts surround the McMahon brothers, while Declan Byrne has been struggling recently as well, so the outcome could depend on the Louth Villagers’ availability.

Emmets have a fairly good record against Gaels, albeit the teams haven’t met in quite some time, mainly due to Roche languishing in the lower tiers as Gaels chased senior honours.

ST. KEVIN’S VS OLIVER PLUNKETT’S
Home advantage could be the swaying factor, although Plunkett’s finished last season with a flourish and with Stephen Keeley back from Limerick, they’ve been given an evident boost.

Ciarán Kenny, son of former Louth player and manager Paul, is at the Kevins’ helm and will be confident of gaining a winning start in the league.

CLAN NA GAEL VS KILKERLEY EMMETS
These two just can’t seem to get enough of each other. Drawn together in last year’s championship, they’re in both league and IFC pools this term too.

Emmets have tended to come out on top in previous battles and with Shane Lennon and Tadhg McEnaney in attack, there is nothing to suggest history won’t repeat itself.

ST. JOSEPH’S VS O’CONNELL’S
This mid-Louth derby should produce plenty of scores, even if Joe’s, under Ollie McDonnell and Christy Grimes, look very hard to back against.

Wayne Callan has charge of O’Connell’s, whose focus will be on senior championship survival. They’ve the forwards to achieve that and give the hosts a rattle at Cluskey Park.

NAOMH FIONNBARRA VS HUNTERSTOWN ROVERS
Is this the day when Oisín McGee returns to Markey Park for the first time? Well, if he’s in the Hunterstown team that’s exactly what will happen.

Rovers, with Peter Dooley still at the helm, are a promising team but the Barrs will want to arrest an alarming slide over the last 12 months and can begin with a win provided William Woods and Liam Shevlin are available.

DUNDALK YOUNG IRELANDS VS O’RAGHALLAIGH’S
A clash of the league’s best defence, in Young Irelands, and attack, O’Raghallaigh’s, ensures Saturday’s tussle at Hoey’s Lane will be intriguing.

If Irelands can contain Ben Rogan, Ruairí Moore and Barry Flanagan, as they did in the 2010 IFC final, they’ve the players, the Maguires, O’Donoghues, etc, to set a victory total.

LANNLÉIRE VS NAOMH MALACHI
Naomh Malachi have struggled for consistency since the restart having been performing well earlier in the campaign, although they did defeat Wolfe Tones to qualify for the Kevin Mullen Shield final.

And they face a trip to arguably the trickiest away venue in Division 3A, with Mark Gilsenan’s Lannléire primed for a title challenge.

They remain a team in the grade going forward; however, Westerns have the armoury to cause the Dundalk side problems in Reaghstown with Tommy Durnin and Ciarán Scriven sure to be vital to their cause.

GLYDE RANGERS VS GLEN EMMETS
A potential cracker in Tallanstown as both teams will be eager to lay down a marker in the quest for league honours.

Alan Kirk and Brian Duffy will lead Glyde’s cause up front, while Conor Grimes and James Butler may be hard to stop for Emmets.

ST. NICHOLAS VS SEAN MCDERMOTT’S
The Seans are looking good since the resumption having played Glyde Rangers and Naomh Malachi in preparation for their league title tilt.

It’s hard to know where St. Nicholas are, although they gave a reasonably good account of themselves earlier in the campaign.

JOHN MITCHEL’S VS WOLFE TONES
Probably the two strongest teams in the division, Wolfe Tones will be bouncing into Ballybailie having beaten Mitchel’s in the Kevin Mullen Shield quarter-final.

But the Binghams, Gallaghers, Micky Nulty and Trevor Matthews are awaiting, and should prove too good.

CUCHULAINN GAELS VS ANNAGHMINNON ROVERS
Gaels were comfortably beaten by Na Piarsaigh in last week’s Kevin Mullen Shield quarter-final, although the run-out will have done them good.

Annaghminnon are hard to predict, but they were more competitive in last year’s Division 3B than the hosts, hence they get the verdict.