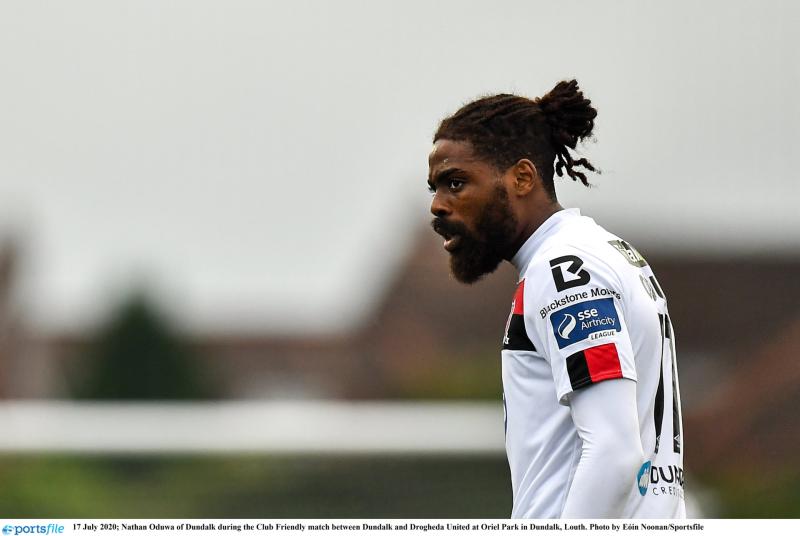 Nathan Oduwa was outstanding and without doubt manager Vinny Perth looks to have found a bright new addition. (Pic: Sportsfile)

A new star was born at Oriel Park last Friday night in the Louth derby friendly and that was one Nathan Oduwa. Nathan was outstanding and without doubt manager Vinny Perth looks to have found a bright new addition.

In a game that produced a single goal he was the creator of so many good things from a wide area.

The goal came as early as 10 minutes when Stefan Colovic put in a sublime corner that waited for someone to get to. It’s usually Brian Gartland who meets corners like this but here it was another of Dundalk’s top-class centre-halves, Daniel Cleary, who met the ball with bullet-like precision to head home. This goal appeared to signal Drogheda’s goalkeeper would have a very busy night.

He did not and that was due to some terrific play and courage from a Boyneside perspective. They are a team who look as if they could be back in the Premier Division next season. 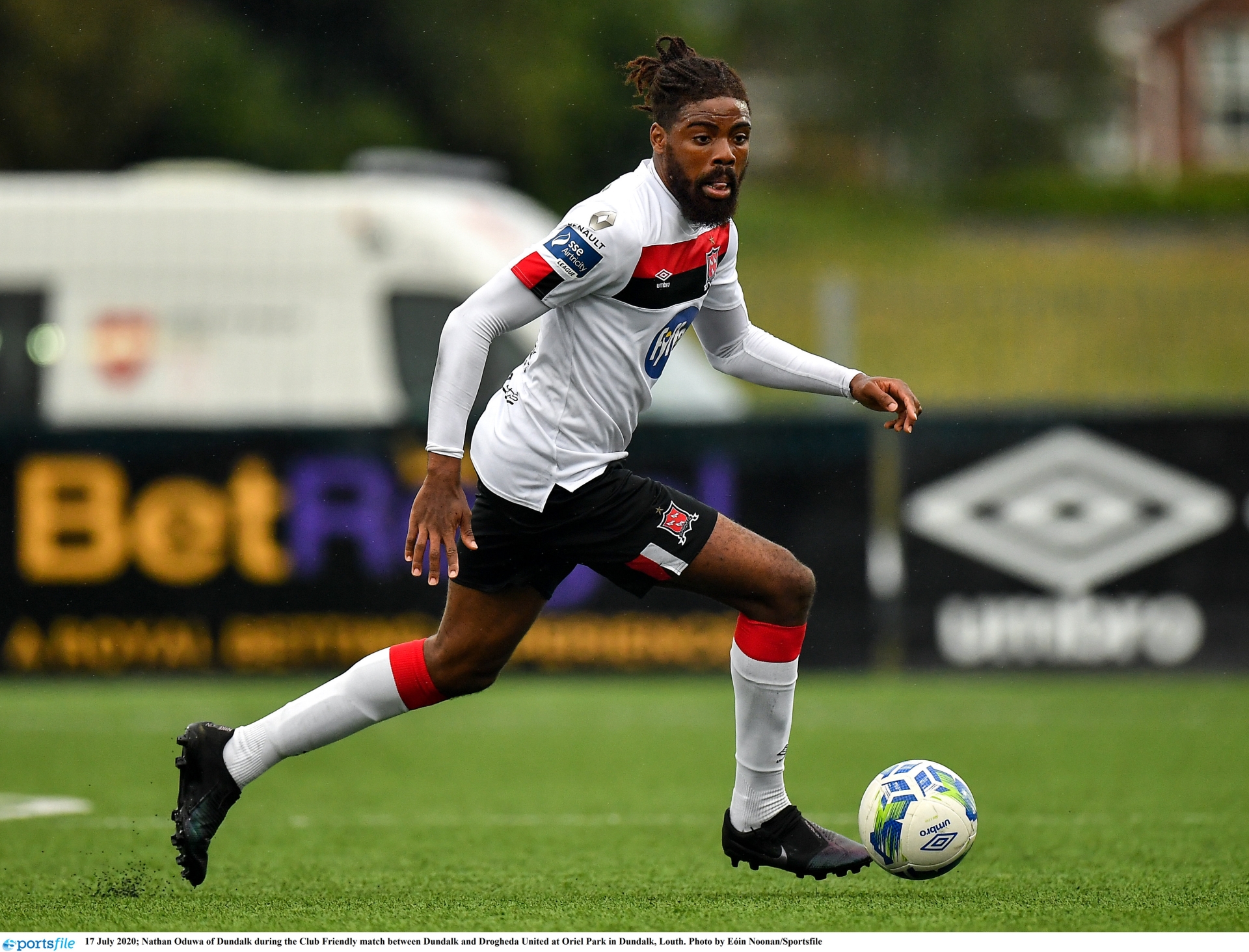 But returning to Nathan Oduwa. Throughout the game he had the Drogheda defence on the backtrack, not knowing how to deal with him. His speed was immense, the ease with which he could beat players sent my memory spinning back to the mid-’70s when Dundalk had a terrific player named Tony Cavanagh. Nathan’s skills are rarely seen in the modern game but on Friday they were.

Tony Cavanagh played on the wing in the initial phase of the success story of Jim McLaughlin at Oriel Park. Signed in February 1973 by a new board that rescued the club from oblivion, Cavanagh played his first game for Dundalk in the FAI Cup at Milltown. Dundalk were second from bottom at that time.

He was superb on the day and helped The Lilywhites to a draw, but in the replay, Rovers prevailed by a single goal.

Nonetheless, the new Dundalk player, along with other fresh signing Gerry Brammeld, gave the club hope for the future. Dundalk did finish second from bottom that season, but as there was no relegation in those days they stayed in the league.
Under a new manager, John Smith, Tony’s career took off. Smith brought in many other signings, including club legends Richie Blackmore and the late Jimmy Dainty.

Cavanagh continued to destroy teams with his sheer skill, jinking the ball past players and getting in his crosses. It was this type of skill I saw from Nathan Oduwa that sent my mind spinning back to the past. 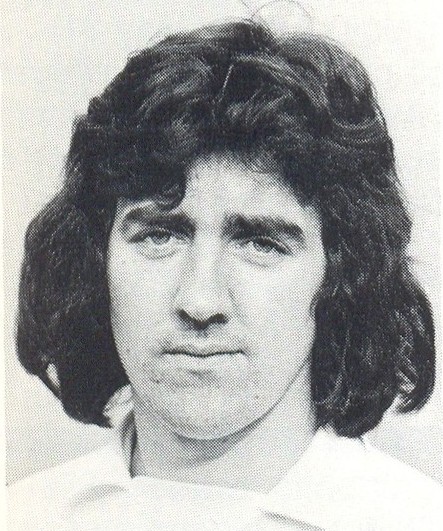 Tony went on to win the league title with McLaughlin, who arrived in November 1974. The Derry man led The Lilywhites to a league title in his first full season.

There were many talented players in the team but Cavanagh, the young Belfast man, lit up Oriel on many a winter night with his unstoppable runs down the wings and his eye for goal - Tony scored many goals but created even more.

Oduwa is an old style winger-cum-midfielder. He has the talent that one saw in the great Georgie Best; brilliant individualism. On Friday night his skill was a feature of Oriel in the mould of Tony Cavanagh 47 years ago. If Vinny Perth holds on to this player, he has a real gem on his hands.

Sadly, Cavanagh passed away a number of years ago at too young an age. From Belfast, he returned to his beloved city when he finished with Dundalk. 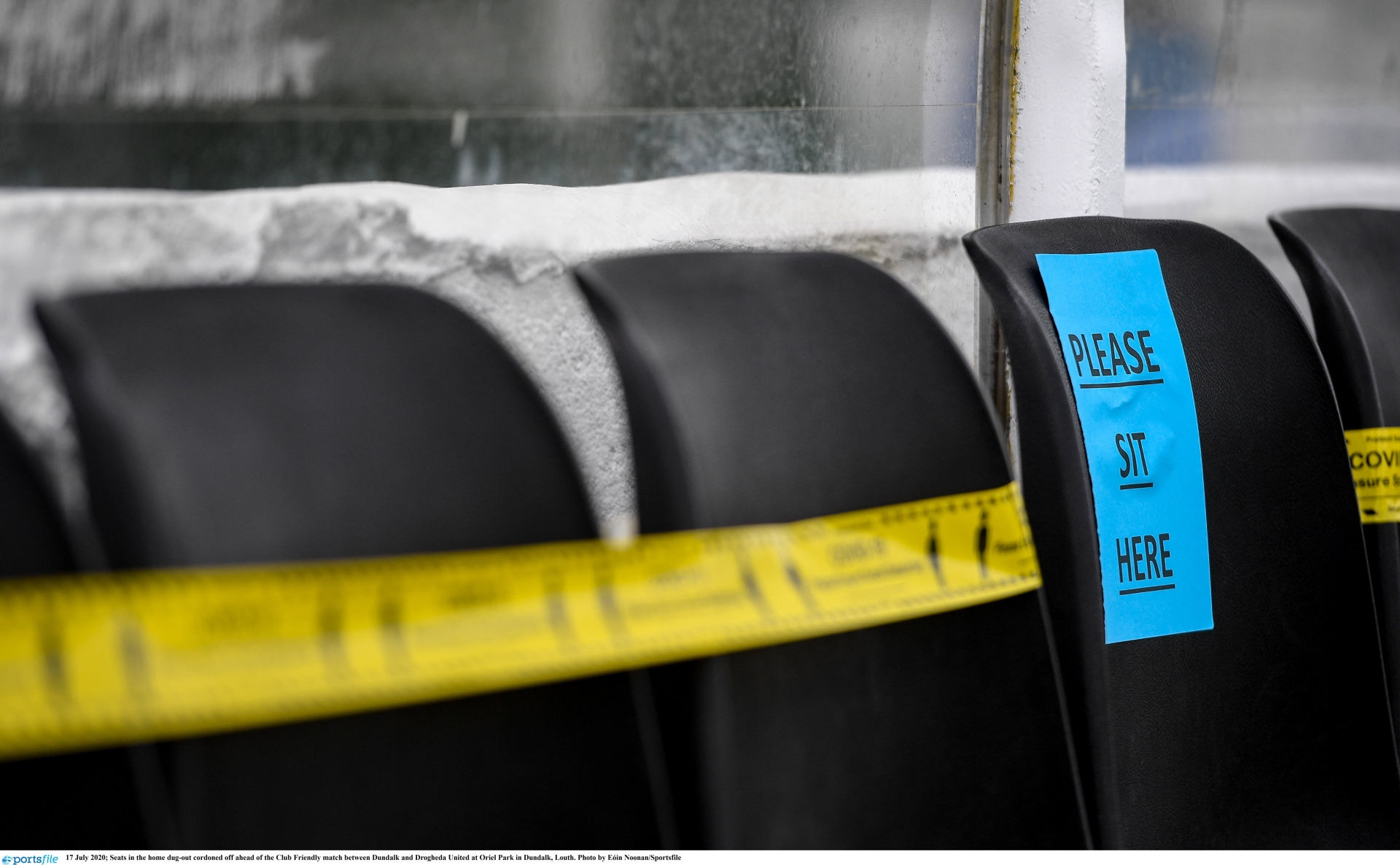 RESTRICTIONS
It was strange to be back at Oriel in the Covid-19 era. People’s lives are the most important element in the prevention of this virus and we have lost far too many people already.

Over 1,750 have died in the Republic as a result of the virus; over 25,000 have already caught it. Many of these people will have to live with the chronic effects associated with the virus for the rest of their lives. These awful side effects get little coverage but they are bad enough to destroy lives.

So, last Monday was the first game I saw under the new restrictions. This was a game against Bohemians. Perth’s side were awesome and put the Dubliners to the sword by four goals to one.

Over the two friendlies so far, just two weeks before the resumption of the season, Dundalk looked like the next three months could bring much success. But, of course, that will depend on the team continuing to progress. Though, the benefit of Perth’s training process is there for all to see; they are super fit.

I was disappointed not to see Dundalk captain Brian Gartland play. This most popular of skippers is such a great motivator to other players. I presume he must have picked up another injury and I look forward to seeing him soon. 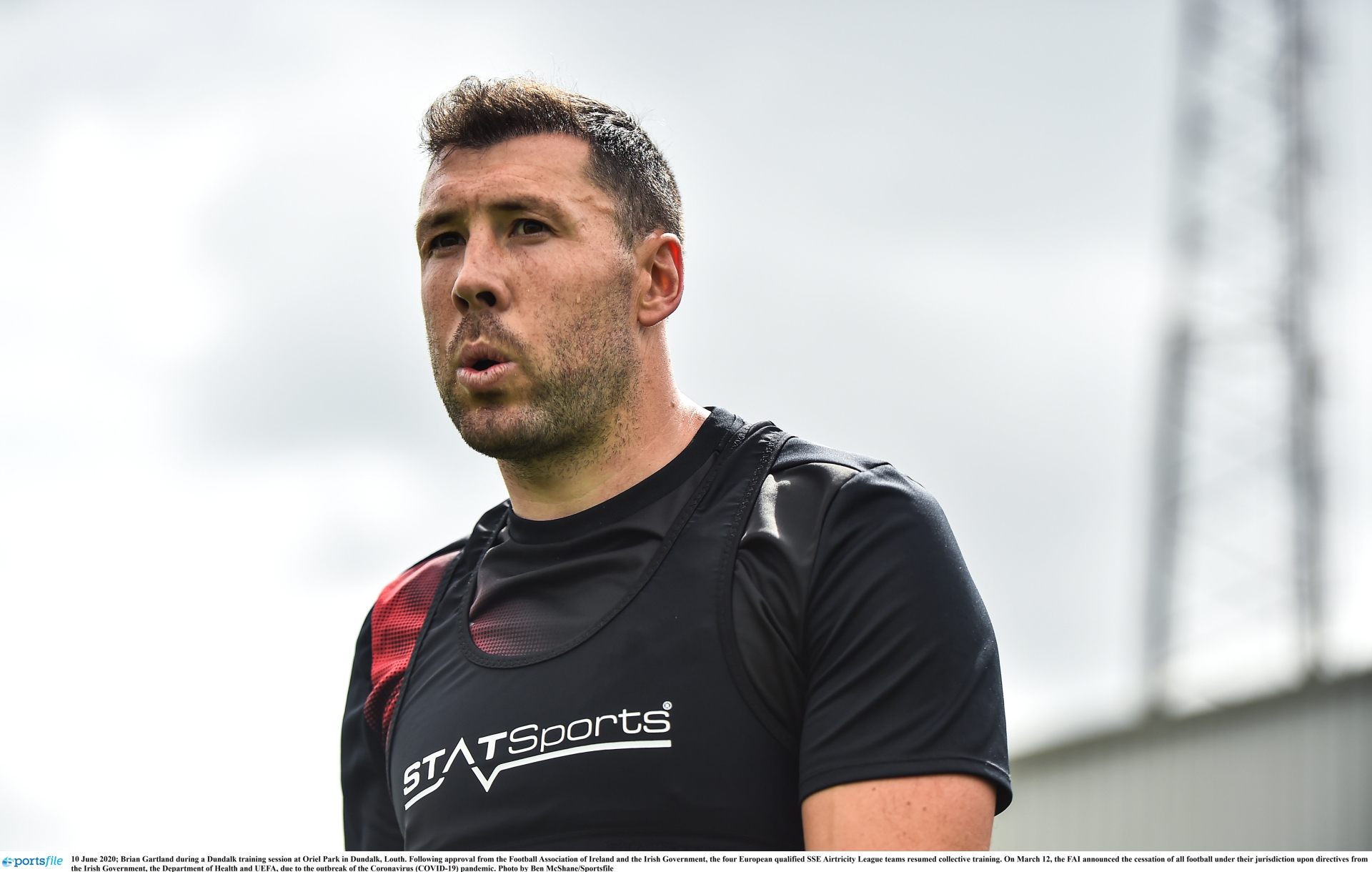 Meanwhile, League of Ireland clubs are continuing their preparations for the resumption of the season on July 31. Plans for attendances of 500 have had to be delayed as the number of rising new virus cases remains a cause of concern.

Attendance is restricted to just 214 people. This includes a total of 42 players, 20 technical staff, five match officials, 20 ball boys or ball girls, and their supervisors, 10 stewards and two Gardai but more outside. Also included in the 200 are up to 28 broadcast staff, including commentators and cameramen, 12 journalists, eight photographers and eight cleaning staff.

Medical personnel are also accounted for along with essential stadium staff and 15 VIPs, 10 of which can come from the home club.

What is clear from the document the FAI have sent to the clubs is that there will be little or no chance of any fans attending the games until the government reviews the restrictions on August 10.

Players are also banned from taking showers after matches until told otherwise.

Thus, sadly, clubs are greatly restricted from allowing any fans into forthcoming games. Hopefully that will change by the aforementioned August date.

Dundalk also learned that if they play away from home in the forthcoming European games that players and managers, including backroom staff, can travel on one plane. But the directors must travel on another. Players will be tested rigorously for Covid up to and after their games. 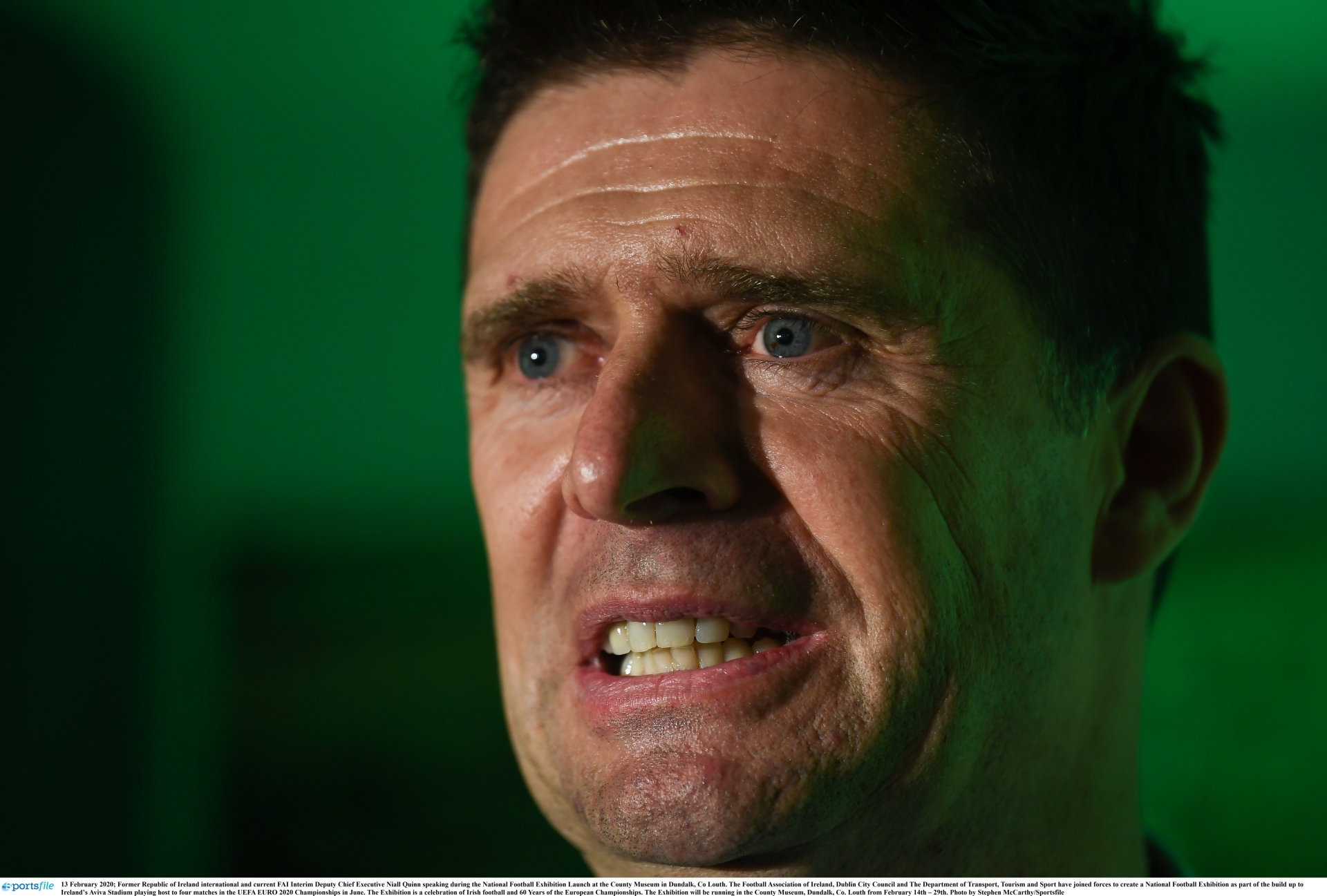 THE FAI
Meanwhile, Sport Ireland has warned the FAI it won’t be getting access to a multi-million euro relief pot until government bailout relief terms are approved.

The €5.8 million due to the FAI has not yet been paid and won’t be in advance of an FAI EGM.

Sport Ireland had told the FAI that in order for it to get its money it must implement changes to its rules as agreed under the government’s Memorandum of Understanding.

The FAI would need to get this addressed, otherwise it will go into bankruptcy, a situation it was on the verge of when the rescue package was put together.

Niall Quinn will not be involved with the League of Ireland as had been believed. Quinn who was interim CEO of the FAI had hoped to have a key involvement with the league going forward. That is not now going to happen.

Meanwhile, the FAI last week refused to comment on whether Dundalk had successfully lodged an appeal against the decision of the National League Executive Committee to restart the league season.

It had appeared Dundalk’s battle against plans to conclude the season after just two rounds of fixtures had been frustrated late last month.

The League Executive Committee, on June 10, confirmed the campaign would just be for 18 games and include relegation and promotion play-offs.

Opponents to the decision had 72 hours to appeal. Now it’s understood Dundalk did lodge a complaint specifically about the process that led to the NLEC’s decision. Dundalk had wanted a 27-game season.

The proposal was pulled from the agenda of a meeting of Premier Division clubs shortly before the NLEC’s ruling.

The FAI would not comment on the suggestion that an appeal had been lodged and while preparations will continue at Oriel for the resumption of the new season, it is not an easy task at all.

Another week gone. Take each day as it comes. And, please, never forget, be careful out there.