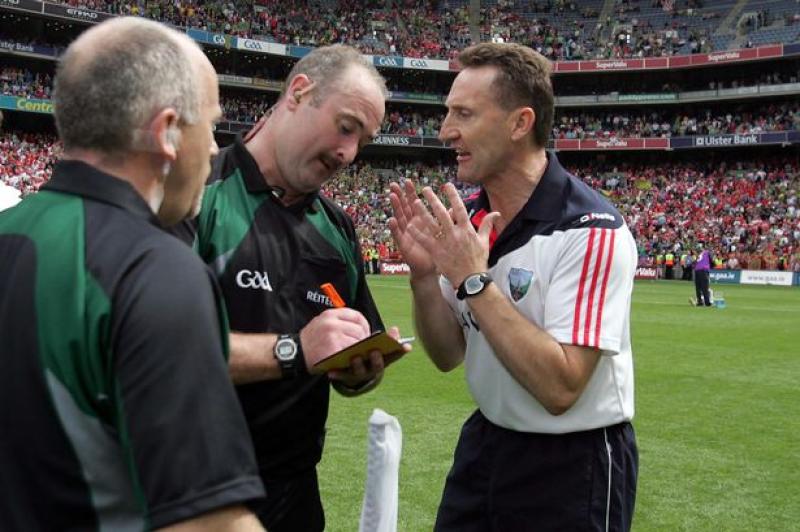 Those still alive who were there for Louth’s 1950 All-Ireland final with Mayo would have paid in the boys’ gate. Some of them would now be the south side of 80, most on the north end. Depending on how lucid their memories are, they can speak with some authority on the lead up to the goal that decided the issue.

The story, as I’ve heard it – and read about – over and over again, goes like this: The game was close to the end and Louth had 1-6 on the board, putting them two points clear. Nicky Roe was by this stage in the dug-out having run himself to a standstill. The Ardee player had scored all but one point of his side’s tally.

If it was today, with cameras all over the place to record even the most minute of a game’s details, it would be possible to establish if Mick Flanagan over-carried the ball before scoring the second and most important of Mayo’s two goals, making it 2-4 to 1-6. In their absence we can only depend on grainy moving pictures, newspaper accounts and, of course, folklore. Mayo scored another point to end the match.

Sixty years later, Croke Park was once again the scene of a controversial score. And this one also cost Louth. Taking on neighbours, Meath, Paddy Keenan’s side were denied a first Leinster title in 53 years. Because the goal can be viewed from every possible angle, there’s no doubt it wasn’t a legitimate score. Joe Sheridan, the scorer, who at first said the goal was alright, has recently conceded that it shouldn’t have counted.

It will be 10 years next Saturday since the game took place. The ‘anniversary’ will be noted if not celebrated, at least not in this county. Indeed, the game itself has got more than a mention in recent weeks, and, hands up, it’s been well flogged on this and many other pages over the years; even League of Ireland top-notcher, Brian Gartland, has recently been asked here for his reaction.

If the fall-out from the Mayo goal wasn’t as long-lasting, it undoubtedly had to do with Louth gaining rich compensation seven years later, and before then reaching an All-Ireland semi-final. But, save for a couple of promotions from the National League’s lower divisions, very little has come this way since the 2010 setback. We can only speculate on how big a boost a championship title-win would have given the county.

Sending hate mail to Joe Sheridan and his family was no credit to the writers, nor did whoever attacked former Meath manager, Seán Boylan, after the final cover themselves in glory. And though emotions can run high sometimes – and they certainly did after this match – a physical attack on a match official is always likely to land the perpetrators in trouble, and can be counter-productive.

It certainly was in this case. It became the main issue as far as the GAA hierarchy was concerned, and though as he points out in an interview with Caoimhín Reilly for this edition, it was a Leinster Council problem to sort out, the then-President of the Association, Christy Cooney, couldn’t have side-stepped becoming involved had the referee been left unimpeded. He would at least have been asked questions.

Incidentally, nowhere in the interview does Cooney mention Martin Sludden, the referee, admitting to have made a mistake. Yet, in a piece for a Croke Park programme about a month after the final, he wrote: “......the indisputable fact is that human errors are made by our referees, just as they are by players on the field of play and managers and coaches on the sideline.
“Martin Sludden’s role in the Leinster final has been well documented and at this stage it needs to be pointed out that he held his hand up and admitted his mistake after that match.”

Held his hand up, okay, but not for a number of days.

The Corkman’s memory may not be as sharp as it once was, and in fairness to him, he readily agreed to speak to Reilly. Sludden has not been so forthcoming to similar requests for interviews, which is a pity because it would be good to know if it’s true what he is alleged to have said to a) JP Rooney after the Louth corner-forward had engaged in time-wasting; b) his green umpire, who didn’t raise his flag immediately after the ball had crossed the line, and c) the garda who went to his assistance when Louth followers surrounded him.

That’s it, as far as Inside Track is concerned; as they say, there’s nothing more to see here.