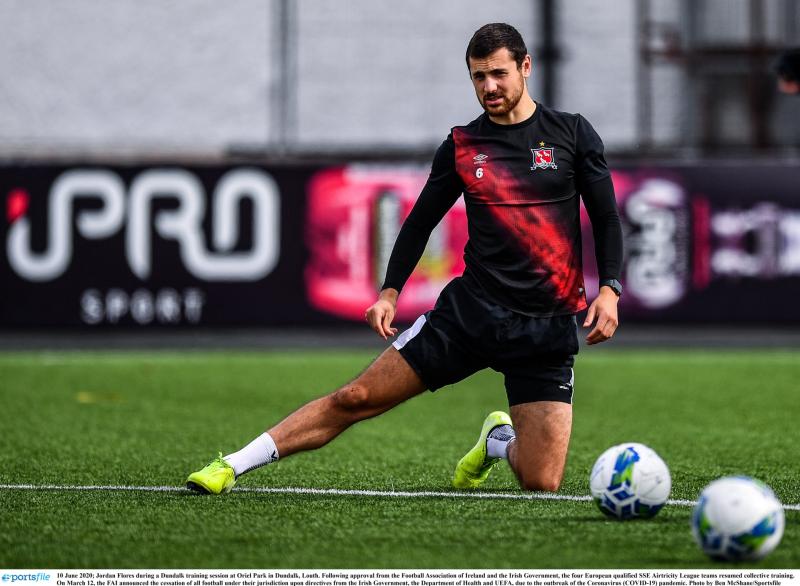 Jordan Flores hit another cracker as Dundalk FC were held by Derry City at Oriel Park on Friday afternoon.

The Wigan-born midfielder struck past Peter Cherrie - who repeatedly repelled The Lilywhites across the 90 minutes - from all of 30 yards with 10 minutes of the second half played as Dundalk denied The Candystripes a morale-boosting victory.

Declan Devine’s Derry had taken a first half lead against the run of play, Walter Figueira finishing nicely past Gary Rogers having skipped in from the left wing.

Indeed, the pair linked up to good effect in giving Patrick Hoban the opportunity to level prior to Serbian Colovic dragging a shot wide, left-footed, from 16 yards.

Will Patching, eager to impress in the No10 position, and Flores called Cherrie into action before half-time as the play continued to flow one way without the scoreboard changing.

And, having opted for no interval changes, Vinny Perth’s men continued to apply the pressure, left-back Darragh Leahy’s acrobatic clip towards goal being tipped away by Derry’s custodian ahead of Flores, unchallenged, releasing a rasper to the roof of the net.

With all of 35 minutes to play at that juncture, the odds on Dundalk pushing ahead to win shortened dramatically, but as the closing half hour was disrupted by several substitutions, the sting seemed to be lost in a game which inevitably drifted towards a stalemate.

The closest The Lilywhites came to a victory score saw Hoban’s flick grasped by Cherrie.