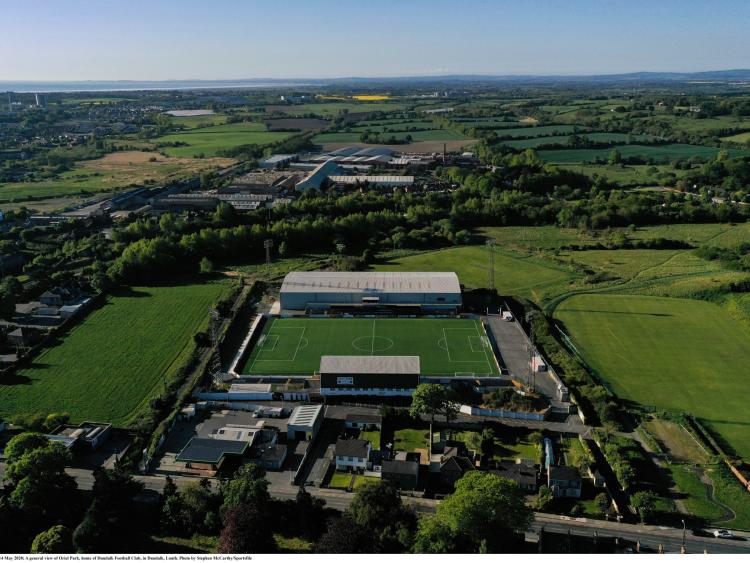 The fact that games will be played behind closed doors when the Premier and First Divisions resume will put in question the very future of many clubs. (Pic: Sportsfile)

I heard an interesting radio conversation on RTÉ Sunday Sport between Richie Sadlier and Paul Lennon last weekend. Both have a deep knowledge of senior soccer in this country and in this case gave a stark reality as to what League of Ireland clubs are staring into.

The fact that games will be played behind closed doors when the Premier and First Divisions resume will put in question the very future of many clubs. As Paul, a journalist with The Star newspaper, and Richie, the former St. Patrick’s Athletic CEO and now a soccer pundit, agreed, clubs survive on the money they take at the gate.

The fact they will have to play behind closed doors should the season start up again pushes the clubs to the point of oblivion.

There was hope at the weekend following a meeting between the Professional Footballers Association of Ireland and the FAI’s interim deputy CEO Niall Quinn. Every League of Ireland club was also represented.

PFAI chairman Stephen McGuinness says that players will soon be going back to train at a time when no money will be coming in. Thus, it’s hoped the government’s pandemic subsidy of €350 per week will continue to be paid to each player. The FAI must seek to maintain this as the lockdown restrictions ease and football returns. 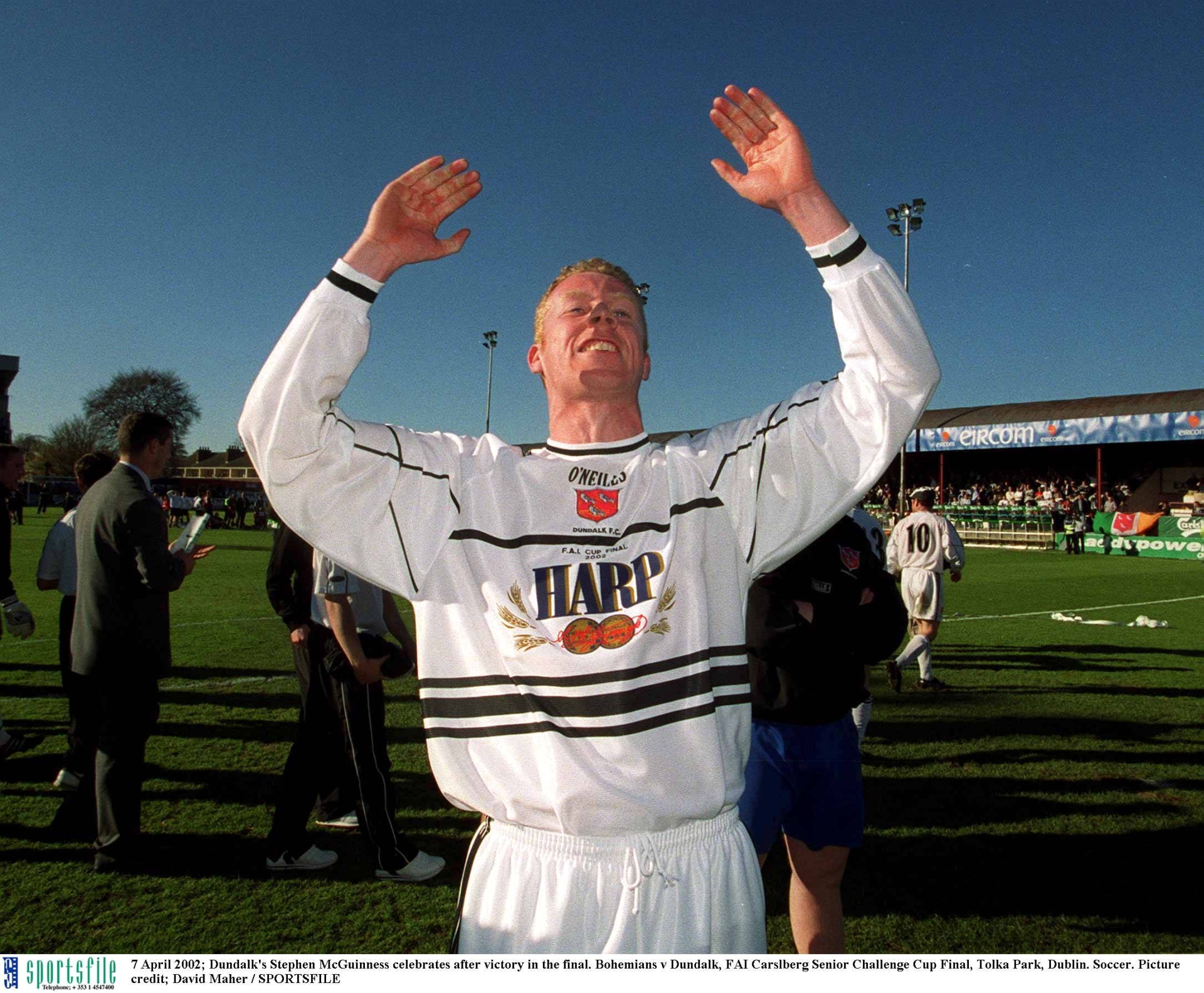 The PFAI also want the payment to continue at least until clubs can play.

Very disappointingly, once again, Quinn was unable to provide any more information on the proposed financial package his organisation are trying to put together to persuade clubs it is worth their while to return to play out the rest of the season.

To darken the clouds even further there were media reports in midweek indicating that the FAI itself may have to again seek funding to keep the game afloat in the country.

It can’t be a case either of some clubs being allowed to sit out the resumption of the season and restart the following campaign. UEFA are very strict on this and insist it’s either all clubs take part or none.

There was good news that players and staff of the league’s four European representatives - Dundalk, Derry, Shamrock Rovers and Bohemians - all tested clear in the Covid-19 tests. A second test took place yesterday and once the all-clear comes back they can return to normal training on June 8.

These clubs will play in a mini-tournament in July at Tallaght to help prepare them for European football in September.

However, even here there is huge doubt that Bohemians and Derry may be allowed to participate. This is because the qualifiers for the European competitions will be shorter. Dundalk and Shamrock Rovers will get to play in Europe but the other two clubs may be severely disappointed. We will know what’s happening when UEFA meets again in mid-June. 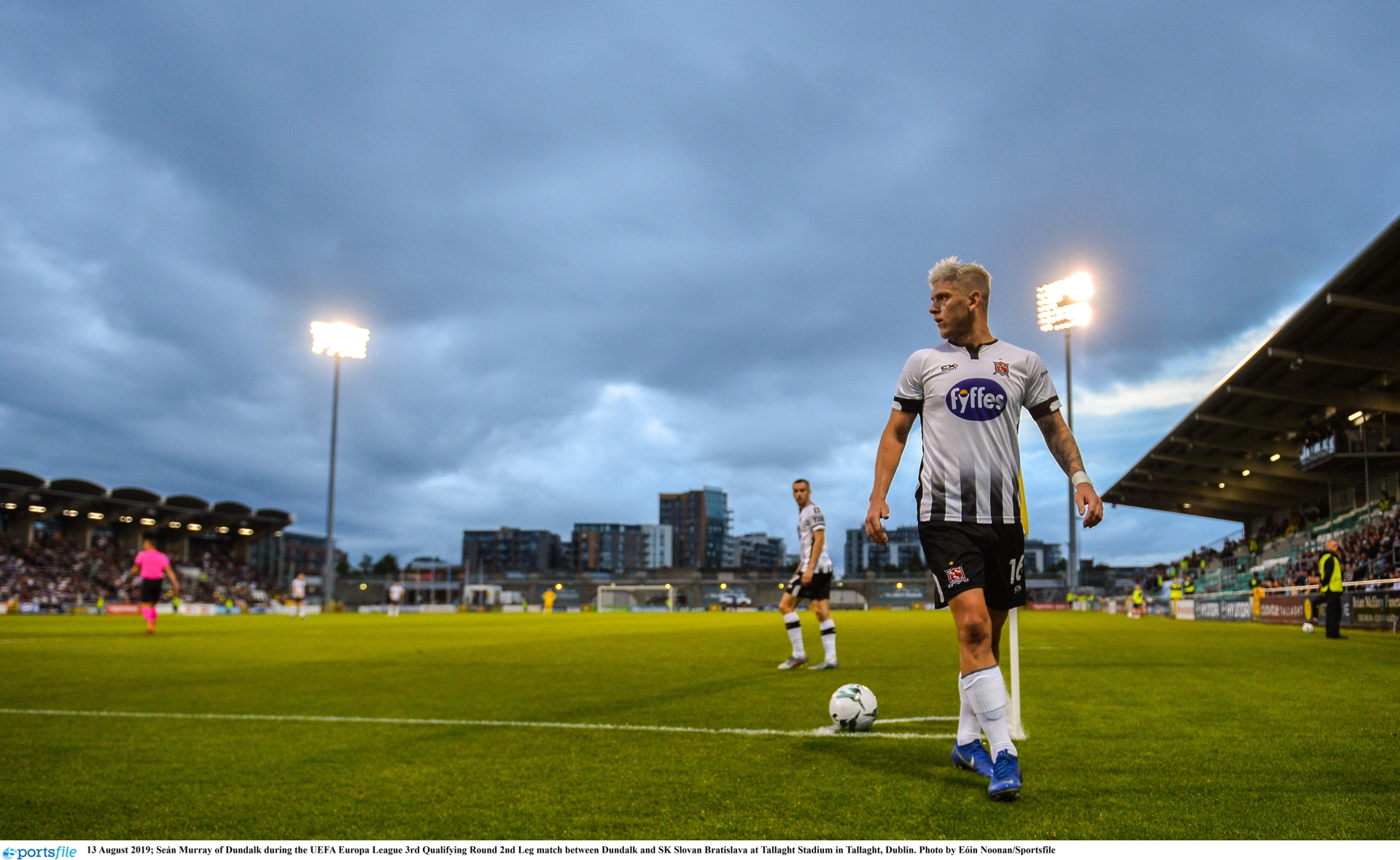 I, personally, cannot see how a large number of clubs can survive without their gate money. They will have to play behind closed doors for the remainder of the season. With the huge costs all clubs face, many may go to the wall. It will all depend on Niall Quinn’s financial package.

If clubs are asked to play behind closed doors again next year then League of Ireland football will say goodbye to the many as they won’t survive.

Dundalk and Rovers will be fine. The Lilywhites are still playing full wages. Although the club’s owners did say last week that they did not have a bottomless pit of money.

The FAI intends to complete just two rounds of league football this season. This, with five already gone, means teams will play just 14 more games in the Premier Division. The 100th league champions will be crowned with the 100th FAI Cup winners. The Aviva, Tallaght Stadium and Thomand Park, as well as Longford Town and Athlone Town’s home grounds, are being earmarked as the venues.

The intention is for clubs to arrive on buses, disembark, enter the dressing rooms, play for points on the pitch and leave. Three days later the stadiums will be available for use again. 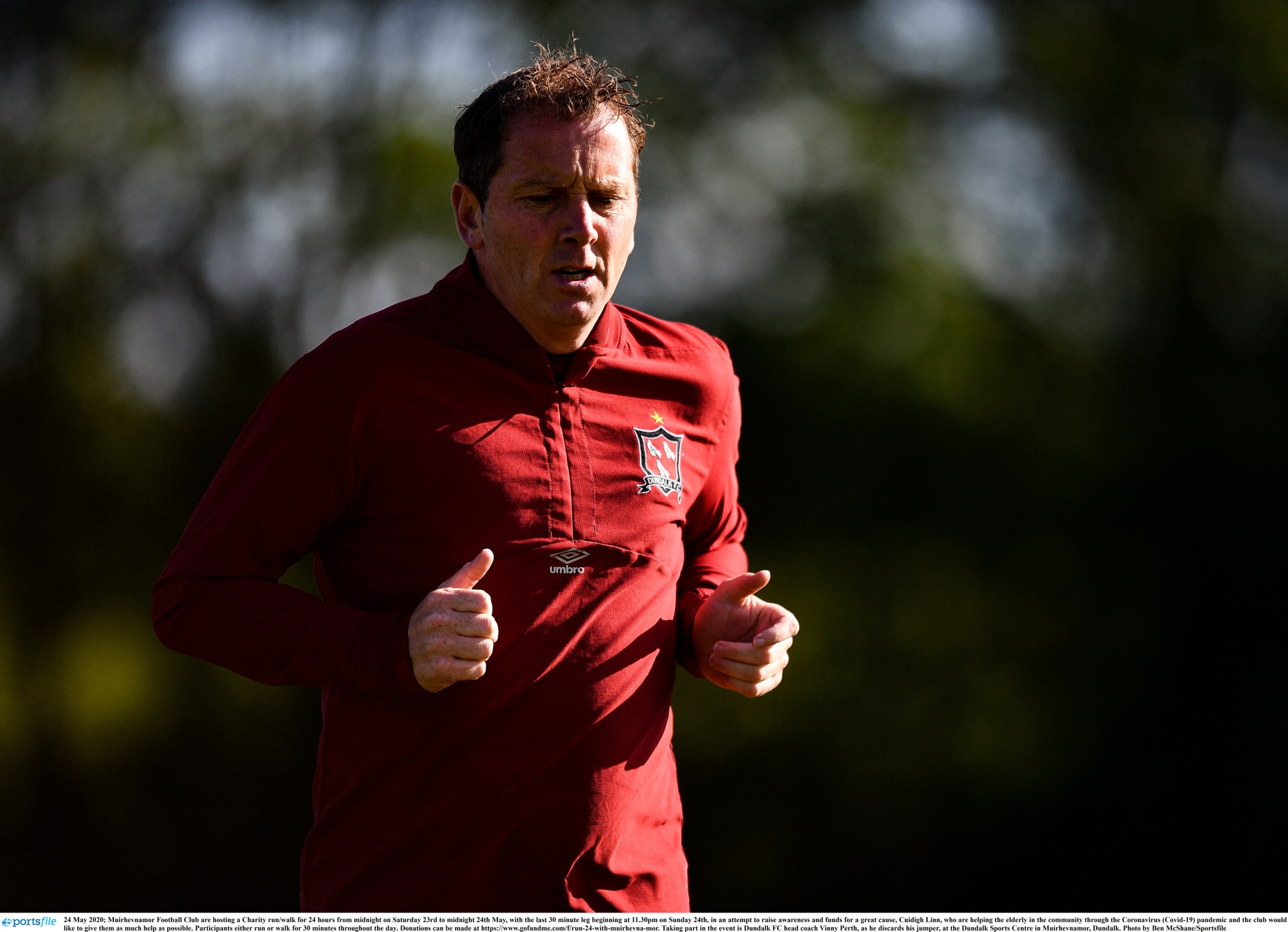 Ruaidhri will be missed but Vinny Perth will get the right man to replace him, I have no doubt about that.

It’s very sad to see the future of Turner’s Cross in Cork being in doubt. This is due to the inability of its owners, the Munster FA, to meet a deadline for the annual insurance premium of €45,000. The ground is closed to football in the short-term. Cork City use it as their home venue.

City won’t need Turner’s Cross for the remainder of the season as they will most likely be using Thomand Park in Limerick.

However, the Leeside venue stages a number of local, regional and international matches at schoolboy, junior and amateur levels. The FAI will have to step in and pay the money.

Cork has already lost a marvellous soccer ground to Gaelic football, now called Páirc Uí Rinn. Cork Hibernians played there before it was bought by the GAA in 1989. I am sure the Cross will remain a soccer stadium, though.

The first week in November will see many players out of contract with their clubs. Dundalk are no different to any other side and there will be a frenzy among clubs to get their business done. Finance is likely to be an issue given the strain this season will put on.

Should the clubs decide to scrap the 2020 season it would lead to a truncated 2021 league which would have to be completed by June 2021. This is because the candidates for the 2020-2021 season have to be known for UEFA competitions.

A restart to the current season in 2020 will be expensive. The costs of clean stadiums, insurance cover, excluding Covid, and overseeing all testing will be high. The FAI can’t write a cheque to cover te costs. One reason is because they cannot call an EGM or an AGM to implement electoral reforms tied to the restoration of funding from Sport Ireland and the government. 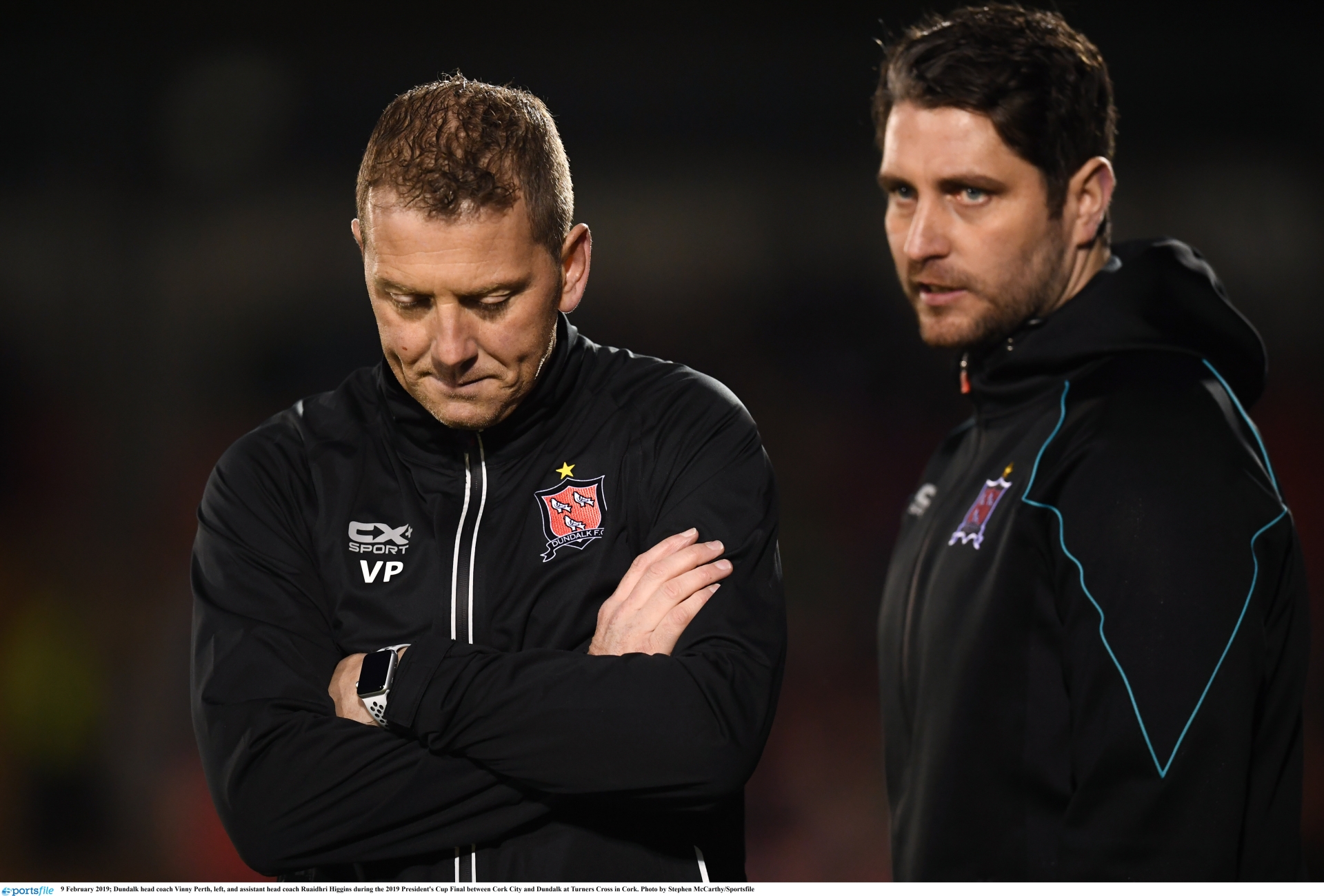 Apart from maintaining their 200 employees they have to follow up on monies owed to junior clubs promised in the John Delaney era. Despite all this the season simply must restart.

Let’s hope funding can be found to ease the pressure on our clubs. The League of Ireland is so important to many people on and off the field.

David McMillan will be returning to League of Ireland football. He arrived back to Ireland from Scotland last week. All Dundalk supporters will wish David well as, at the age of 31, he still has much to offer. He is a top-class player who did so much to put Dundalk back on the map during the Kenny era.

It was nice to see the club continuing their good contact with the community. Postcards have been sent out to many supporters from players wishing them well. Club jerseys have also been donated to a lucky few and Dundalk boss Vinny Perth has even been talking to some young fans by phone. A great gesture by the club, players and, of course, Vinny.

The weather has been great this past number of weeks. A plea to parents to make sure their children are aware of the dangers of swimming in our seas, lakes and rivers. The coastguard helicopter was called out twice in three days to Blackrock last week. They had to airlift two kids who had drifted out too far. Thank God they were okay.

Then the alarm was raised on Wednesday when a child was reported missing and believed to have been in the sea. The coastguard helicopter was out again. After a two-hour search it was confirmed the missing person was not in the sea, and had been located safely.

I wish you a good week, and stay safe.