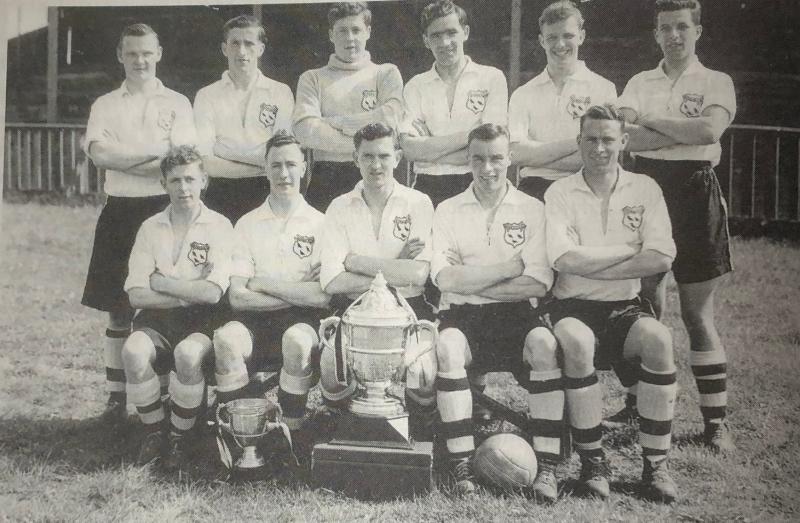 The Dundalk FC team of 1958 which won the FAI Cup.

There’s nothing for it but to keep taking backward glances to have the sports pages filled to capacity. Until the world stopped spinning we could at least talk about what was coming up, making predictions and suggesting who could be match- or race-winners. Now, we can’t do that, because, simply, there’s no schedule, and it’s not known when one can be pieced together.

Golfers will soon be able to take what John Feinstein said was – and colleague, Terry Conlon, had emblazoned across the top of his page – “a good walk spoiled”; but only if there’s nothing more than a handshake for the winner. And maybe even that won’t be allowed.

Tennis players can get back to lobbing and smashing and, if they’re playing a doubles match, fist-pumping, which, to someone who only looks in when Wimbledon is on, is even more irritable than the screeching which can be sometimes – maybe most times – heard whenever there’s a serve.

Do you ever wonder what it would be like if it was the same in Gaelic, or any other football game, Stephen Cluxton, say, or Marcus Rashford, or even Jonathan himself, letting out a bellow every time they sent a kick goalwards? Same goes for Cluxton or any other goalkeeper restarting the game.

Three Gaelic footballers mentioned on these pages in recent weeks along with, arguably, the county’s greatest-ever, are included in the accompanying Louth team photo, supplied by James Molloy, from Ardee. The soccer picture is of Dundalk’s FAI Cup-winning team, taken from Jim Murphy’s story of the Oriel Park club.

Jim Quigley, the team trainer, was left behind when Louth’s 1957 team travelled to America as part of their prize for winning the All-Ireland; Peter Corr, an All-Ireland minor medal winner, played International soccer when his GAA career was over, and, when 20 years of age, Paddy Cluskey was told to have a good shave before turning out for Louth in the 1931 All-Ireland minor final.

All three were involved when Louth won the 1943 Leinster Championship, giving the county provincial honours in the senior grade for the first time in 31 years. Cluskey was team trainer and Quigley lined out at centre-half.

Corr played on the left-wing and scored 1-8 in the defeat of Laois in the final, having claimed five points in the opening round defeat of Meath, the same against Dublin in the quarter-final and three points in the semi-final win over Offaly. 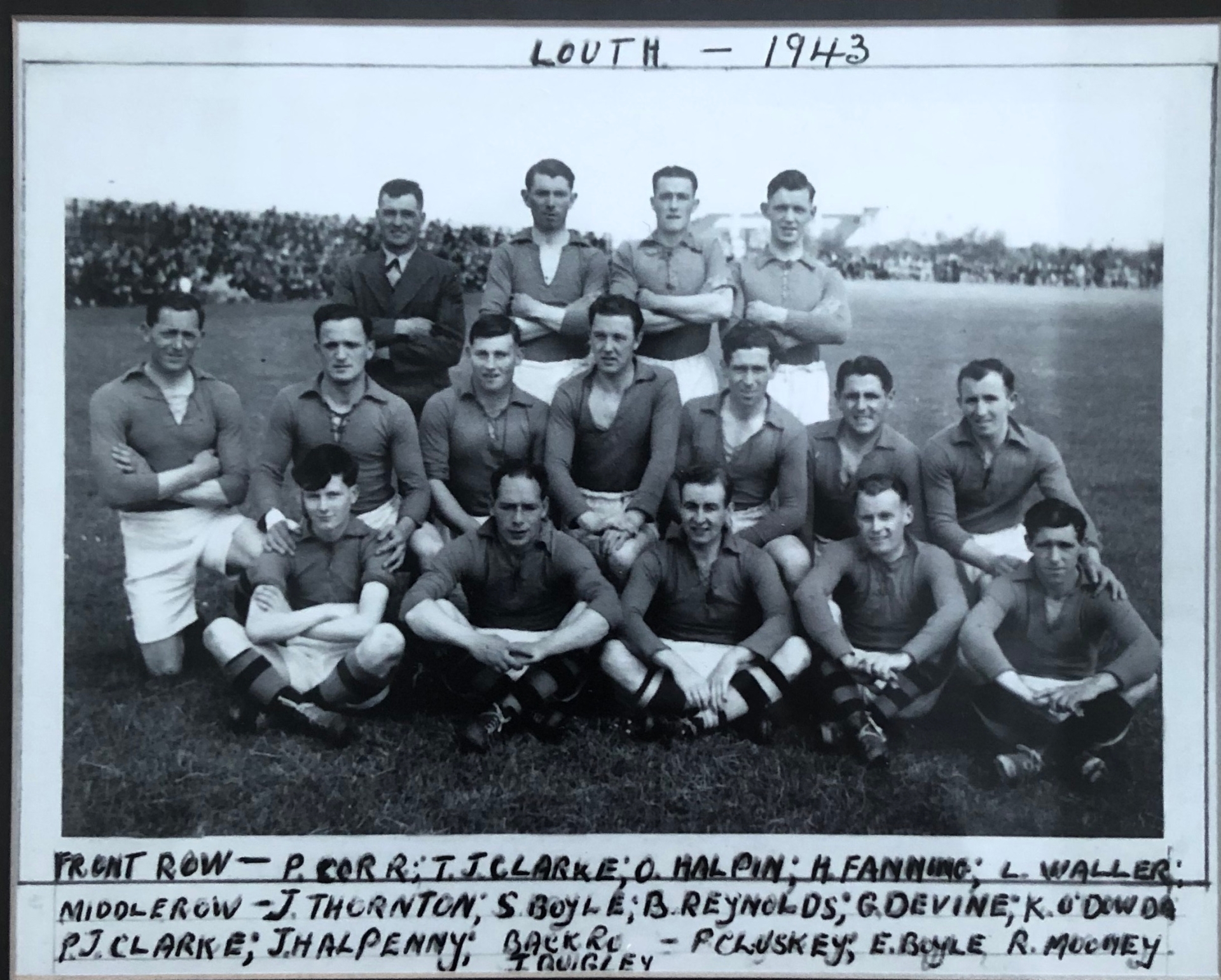 PEERLESS EDDIE
Full-back was the peerless Eddie Boyle, flanked by another Boyle, Seán, then playing with Ardee St. Mary’s having transferred from Cooley Kickhams.

Kickhams, however, were still well represented, providing four to the first 15, Jimmy Thornton, Tom Clarke, and two of the three priests in the forward-line, Kevin Connolly and Mick Hardy. Larry Carr was the other priest, and Jack Regan was team captain.

There are many who claim the Louth team of 1948 – also beaten in an All-Ireland semi-final – was the best ever, but evidence that the ’43 side may have been better came at the beginning of this century when six of its members – the two Boyles, Thornton, Quigley, Regan and Ollie Halpin – were named on the county’s team of the millennium. Many considered Corr unlucky to have missed out in that 2000 selection, while that great Roche man, Jack Treanor, was steadfast in his opinion that Kevin Connolly was one of the best to ever wear the red jersey.

So what happened in their quest for the All-Ireland title? The simple answer is that they couldn’t beat Roscommon in the semi-final. But Rossie skulduggery was allowed to have the call over skill and style; had it not been, the result might have been different.

MARKED MAN
Knowing of the threat he posed, Peter Corr was a marked man;  the game wasn’t long in progress when he was left seeing stars. Concussed, the Sean O’Mahony’s clubman had little chance of repeating his Leinster Championship heroics after that.

The War was at its height, and with travel restricted, just over 18,000 turned up at Croke Park to see Roscommon’s 3-10 to 3-6 win. The Connacht county went on to take the title for the first time, beating Cavan in the final, and they won it again the following year, defeating Kerry.

Corr played on for two more seasons, but then switched his allegiance to soccer. He was a star here as well, first of all at Oriel, where he spent one season. He then moved to Preston North End, where he was understudy to the great Tom Finney; and as his career began to blossom he transferred again, this time to Everton.

It was at Goodison that he won his four International caps.

Talk about star-studded teams, Dundalk’s Cup-winning outfit of 1952 must have been one of the best ever when the likes of Peter McParland couldn’t find a place on it.

Newry-born McParland, who’d been at Oriel since his teenage years, transferred to Aston Villa soon afterwards, and quickly established himself on the first-team. His two goals – and clash with Manchester United’s goalie, Ray Wood – were the highlights of Villa’s 2-0 win in the 1958 FA Cup final.

EXCEPTIONAL TALENT
There was exceptional talent and some great Oriel favourites on the ’52 side. And it had a huge local flavour as well. Joe Ralph, Joe Martin, Tommy Traynor and Jackie McCourt could ride a bike or even walk to work the morning after a game; Walter Durkan came in from Carrickmacross, and Paddy Gavin from Drogheda.

Mattie Clarke was captain and Leo McDonagh would, along with Ralph, win another Cup medal six years later.

Knockbridge’s Eddie McKenna, reserve goalkeeper, was in for Durkan for the semi-final. Traynor transferred to Southampton and won eight International caps, and Clarke also lined out in a full International, but not while wearing the white of Oriel.

The campaign was a lengthy one, six games in all. There were two replays, the first in the semi-final with Waterford. A 2-2 draw with the Deise was followed by a remarkable 6-4 win at Milltown, the game finishing in near darkness. Then there was the two-match series with Cork Athletic in the final.

JOE TO THE RESCUE
Joe Martin rescued his side with an 87th minute goal in the first game, bringing his tally for the competition to five. The replay was arranged for the following Wednesday, and it would seem the Cork boys weren’t best prepared for it.

Seemingly, they celebrated on the night of the drawn match as if they had won; then, according to a report carried in Jim Murphy’s book,  returned home on Monday and “cured themselves on Tuesday”, before going back to Dublin for the replay.

A press report of the final said: “Cork, even in the pre-match kick-about, displayed none of Dundalk’s sprightliness.”

Cork wing-half, Johnny Moloney, explained in a later interview the reason for his side’s lethargy: “The replay was a farce – our fellows were still drunk after Sunday.”

And from that you can gauge just how easy it was for Dundalk in the 3-0 win, the goals coming from Johnny Fearon, Fergus Maloney and Paddy Mullen.

McDonagh and Ralph weren’t the only dual Cup-winners on the ’52 team. In the final of three years earlier, Johnny Fearon was at No2 for the 3-0 victory over Shelbourne.