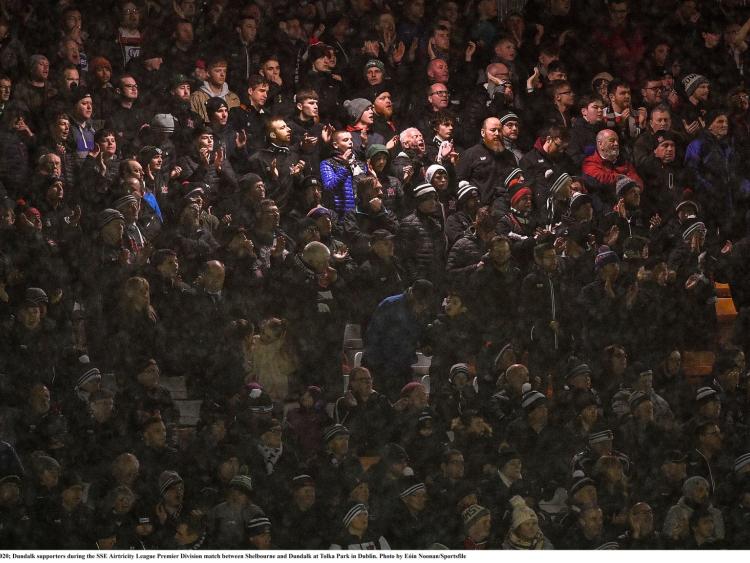 Dundalk FC's travelling support is one of the biggest in the country, yet fans are unlikely to be allowed to attend matches under Covid-19 restrictions if and when action returns. (Pic: Sportsfile)

There have been brave moves by all clubs, players, referees and the FAI to have the League of Ireland season, which has been turned upside down by coronavirus, resumed by June 19.

The intention was that the games could be played either behind closed doors or in front of a very restricted crowd of no more than 220, along with further restrictions even within this limit.

Clubs have made contact with fans also about paying for games to be streamed so that they would not miss out on their team’s involvement. The streaming fee would be minimal.

There were important health and safety restrictions made within the proposals. The players’ body, the PFAI, had a big input to the document put forward to the clubs. It was very positive to see Dundalk manager Vinny Perth and Shamrock Rovers boss Stephen Bradley giving the proposals their backing.

But many clubs do have reservations quite understandably with these same outfits unhappy to proceed. On Friday night last came another development. As the government launched its reopening plans for the economy it became clear the soccer season will not be resuming until July 19 or 20.

It’s only a change of a month, though, and all other stipulations from the previous proposed season restart will apply.
However, it’s clear that club opposition to the proposals worked out early last week is growing and might not get the nod. This is mainly because of the loss in revenue teams would suffer from hugely reduced attendances or games being played completely behind closed doors.

Finance for clubs is due from FIFA and this will likely bring members to the realisation that it is the only way to get the season going again.

A proposal to restart in September and finish in February next year had drawn a lot of interest. However, the FAI have made it clear these games will still have the same limited attendance restrictions, or be played behind closed doors altogether.

Whatever happens it appears games will not all take place on a Friday night but may instead be fixed on an individual weekly night involving just one game and be streamed for paying fans.

Dates and times for the resumption of the season are all subject, of course, to the extent to which the virus is under control. What is clear is that games are just not going to be the same again in the country for quite some time.

With an appalling death rate of over 1,400 people by last weekend on an all-island basis, what the world has experienced in 2020, and will continue to do so, will be felt for generations. On the economic front, Ireland had full employment at the beginning of the year. Now it’s soaring throughout every part of the country.

One interesting development that struck me was St. Patrick’s Athletic’s opening of a food bank at Richmond Park. The superb idea is being carried out by other local agencies in the Inchicore area of Dublin. It will provide a much needed service to people in the area and is an initiative that could be considered by other sporting organisations, not just League of Ireland clubs.

Another positive feature to emerge last week was the agreement by the FAI and IFA to look at the latest All-Island League proposal. A joint-sub-committee of both organisations will be set-up to look at the detailed report.

It’s sad to see the passing of former Liverpool and Republic of Ireland great Michael Robinson. Robinson won a league title with the Merseysiders and picked up over 20 caps with the Republic. He died at the age of 61 after a long battle with cancer.

It appears Robinson’s former club have not yet got their hands on the Premier League trophy. On Friday, clubs met and agreed to a proposal to still finish off the season behind closed doors. Other countries have just handed the awards out and finished the season early, but, in England, they will try to finish it on the field of play.

It’s hard to think we are into May already. We are all looking forward to the hopeful but gradual reopening of the economy. I think the Irish public have been, on the whole, great in complying with the vital restrictions. Gardai, too, have been superb at the way in which they have enforced restrictions with such professionalism.

To those of you who have lost a loved one, the only thing I can say is, my heart goes out to you all.