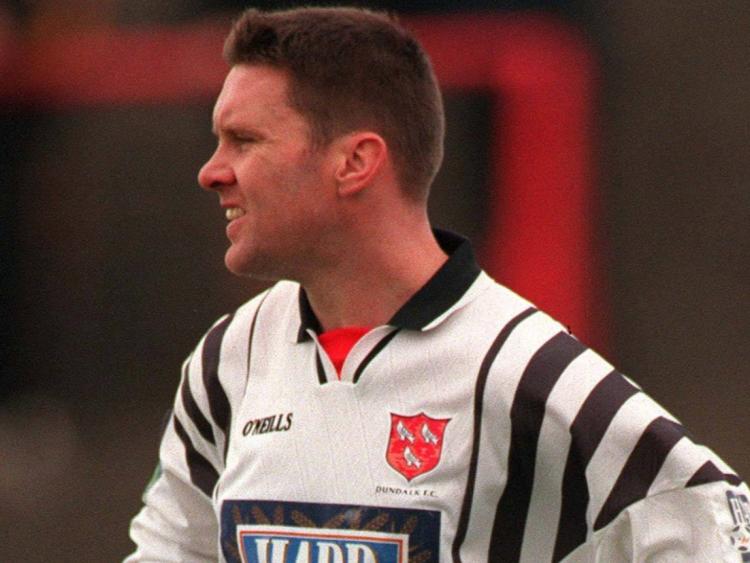 Few can match the feats of Peter Withnell, a League of Ireland title winner with Dundalk FC and two-time All-Ireland medalist in the colours of Down. (Pic: Sportsfile)

The Mourne man was a champion with The Lilywhites 25 years ago, having acted as the vital ingredient in getting Dermot Keely’s unfancied side past the victory post in dramatic style.

Less than six months after the boys in red and black bettered Dublin to land Sam Maguire for the second time in four seasons, Withnell was spotted by Dundalk director Nicky Coffee playing up front for mid-Down amateur outfit Kimore Rec.

Struggling for goals and needing a boost ahead of the final eight games of the campaign, he was requested for a midweek friendly against a touring crew from Sweden. Keely was pleased with what he saw, but still hesitant on offering terms until Withnell, being the ‘what you see is what you get’ character he is, interjected.

“He asked me to play in a reserve game, but, me being me, I said, ‘listen, if I’m not coming up to play a first-team match I’ll not be coming up at all’,” Withnell recalls. “I felt I was good enough to play, so he turned around and invited me back. The rest is history.

“I knew I could handle myself in that league; nothing ever phased me and I always believed in my ability.” 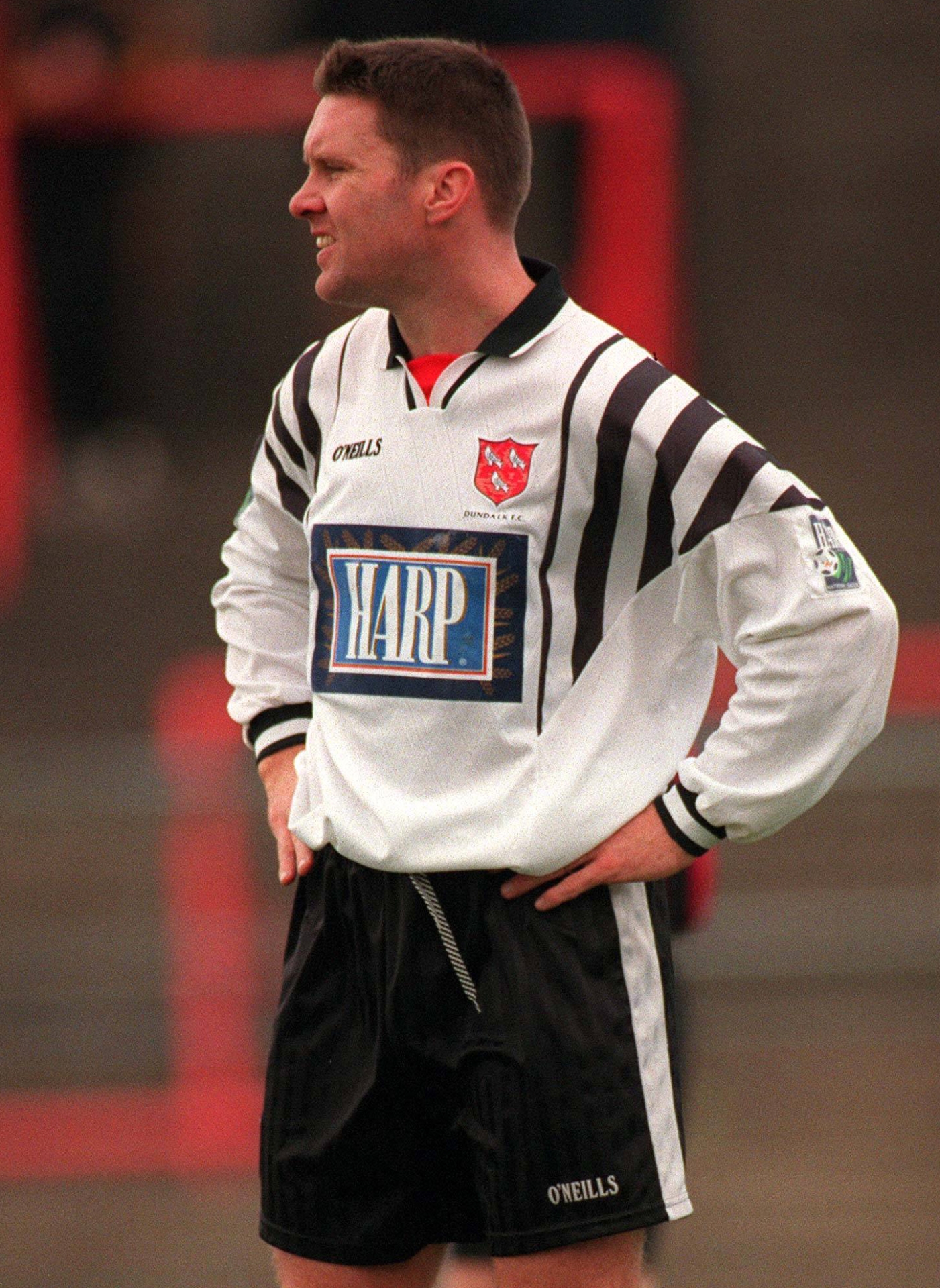 The star of Down’s 1991 All-Ireland triumph wasn’t shy in the confidence department, albeit he was a quiet type in many ways. There goes a story that Withnell walked into his county’s dressing room for a training session in Newry years before, seemingly disinterested at the others’ confusion over who he was.

A Drumaness clubman who was used to furrowing in the lower tiers of Down club football, he was suddenly in with Ross Carr, Mickey Linden, Paddy O’Rourke and the like, players he wouldn’t ordinarily have come across.

Hence, walking into an enclosure of ‘Oriel boyos’ wasn’t as daunting as one imagines for Withnell, who had soccer pedigree having spent time with Reading in his youth.

“It was quite easy to come in and adapt,” he adds, “especially coming from winning All-Irelands and being in circles with big characters around you. There was really no difference.

“They were all characters at Dundalk, characters in their own way. Especially Tom McNulty. Tom was boisterous; always a wee bit loud being the Scotsman that he was.

“It was like a timebomb waiting to explode with the likes of Dermot, Tom and James Coll, who were all sort of loud in their own way.

“I think everybody just had a different input and way of carrying themselves. You’d Joe Hanrahan, James Coll, John Coady, Mick Byrne, Martin Lawlor - they were all different characters and it became a good recipe for success.

“It just became a really good club to play for and one that I’m very fond of. It’s steeped in history for football, Dundalk, and that was never going to go away.

“The fact that you’d a GAA player who was only after winning two All-Irelands to come and play was just another notch to the board. It was a great club and I’ve still fond memories of them.” 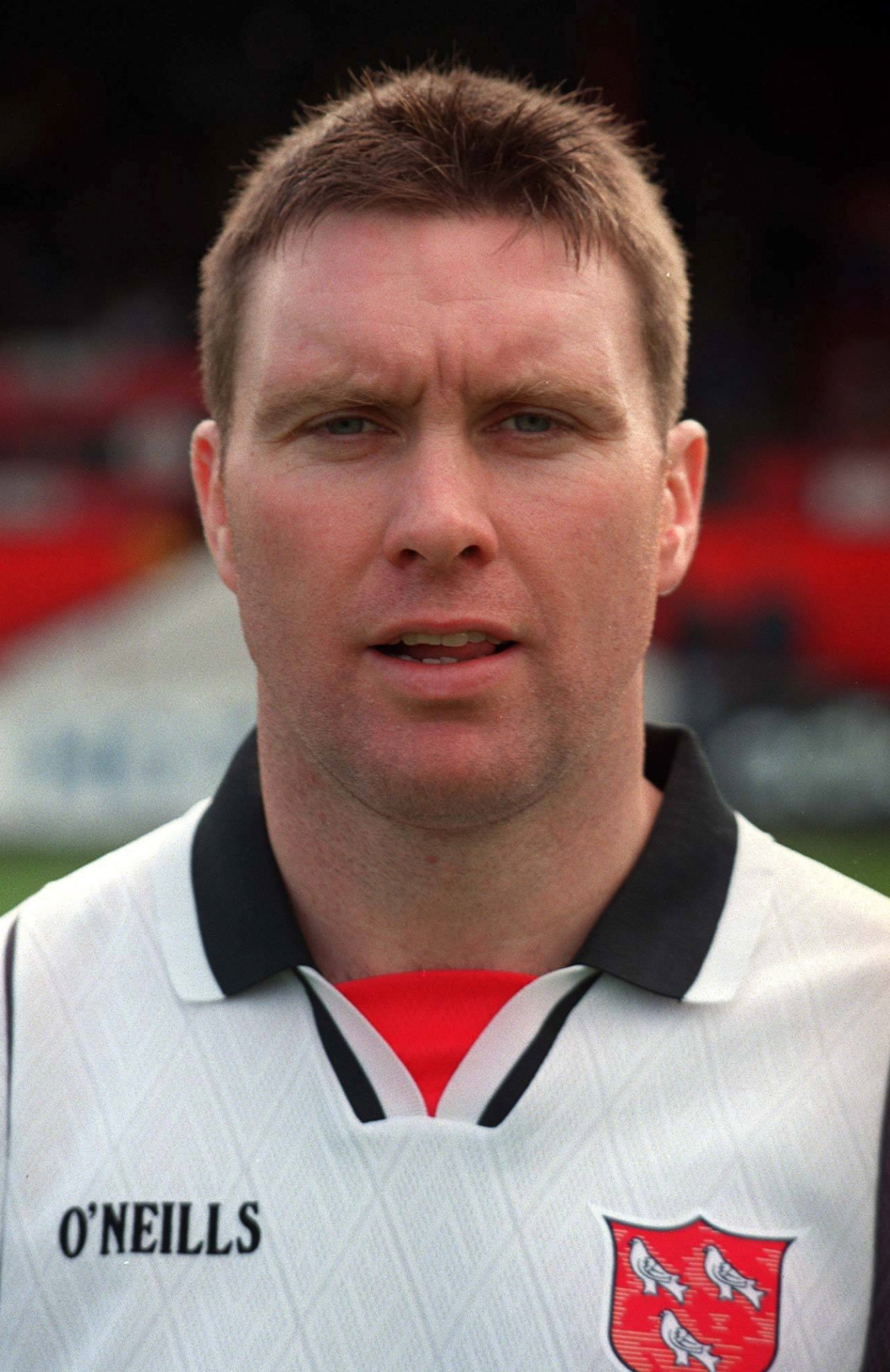 DEEP END
Withnell was hurled in at the deep-end in March 1995, Jody Byrne’s injury resulting in the new signing’s debut coming against Shamrock Rovers. And from there to the end of the season he would be an ever-present, scoring vital goals in the victories over Derry City and Sligo Rovers.

Going into the last day, though, The Lilywhites sat third, behind Derry City and Shelbourne. Shels dropped points at home while Derry failed to win at relegated Athlone, outcomes which gave Dundalk, who had overcome Galway United at Oriel Park, the spoils which Withnell felt they didn’t believe were possible.

“I don’t think Dundalk thought they could win the league,” says Withnell. “I’d say they had put it out of their mind, sitting third, before I arrived. They needed a new lease of life and I became that at just the right time.

“I know we won it on the last day and results went our way, but I think what clinched it for us was the second last game in Sligo, where I scored and we won 1-0.”

The financial lure of The Lilywhites saw them take preference, to a degree, over Down, yet Withnell remained committed to his county and is adamant that he should have featured more prominently in the 1994 triumph. A mixture of Gilmore’s groin and manager Pete McGrath’s ultimatatory tendencies prevented the powerful forward from unleashing himself on that summer.

“There was a bit of a recession in the North and as the saying goes, ‘half a loaf is better than no bread’. Even though you were playing GAA to a very high standard, the national sport, it wasn’t putting anything in my pocket.

“I was in a county that was steeped in the troubles and there was no flexibility for jobs or openings where people might want to give you a job because of your GAA in Down. If you had to have been born in the South of Ireland and playing for Cork or Kerry or Dublin, you’d have had a job lined up for you and be well looked after to this day. 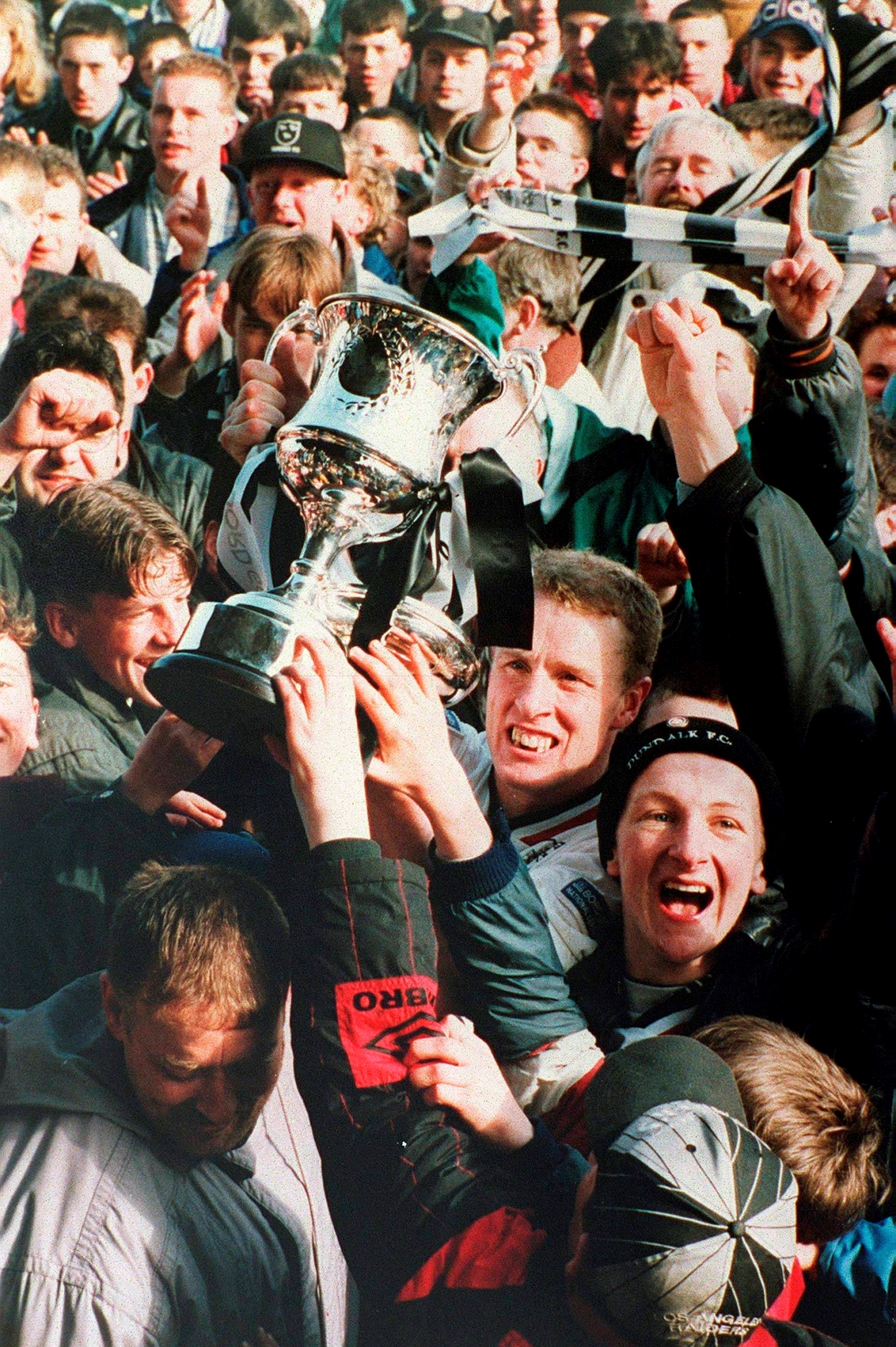 “With Dundalk offering me a good contract and having always played soccer in my life, since I was young, the offer was too good to turn down. I know Pete didn’t like it, but I felt I could play both sports.

“He felt the GAA should be number one - and rightly so from his point of view. He was a teacher coaching GAA in St. Colman’s College and Down and he didn’t understand where I was coming from.

“But I couldn’t see how if you were fit to play college football on a Saturday and come and play a county match on a Sunday, why I couldn’t play on a Thursday or a Friday night for Dundalk and play for my county on a Sunday. That wasn’t seen as right, so who was right and who was wrong?

“I felt I could play both sports and when somebody offers you a contract, even though you’re still part of the Down set-up and an important part of the set-up, I was always going to play soccer because the GAA weren’t putting anything in my pocket.

“I know that might sound selfish, but it was how it was. I got a kitbag, a pair of tracksuits and boots, that’s what you got with Down.”

AS GOOD AS IT GOT
Withnell hit double figures for Dundalk the following season, but with the team far weaker and several high-profile players, including the skipper, Coll, having left, the cocktail was diluted.

Financial issues began to plague the club and while Withnell praises then chairman Enda McGuill for always having his wages available when promised, managers began to come and go as teammates left without replacements.

The Champions League qualifier with Sweden’s Malmo was the high point of the striker’s first full campaign as The Lilywhites bowed out 3-0 on aggregate despite giving a credible account. Though the fact that the home leg had to be played in Drogheda, with Oriel Park not up to the required standard, underlined the precarious off-field situation.

“I felt the players shouldn’t have moved on. James Coll moved on to Bohemians after being the club captain of a league-winning team; he should have been kept. There were money issues and Dermot moved on. 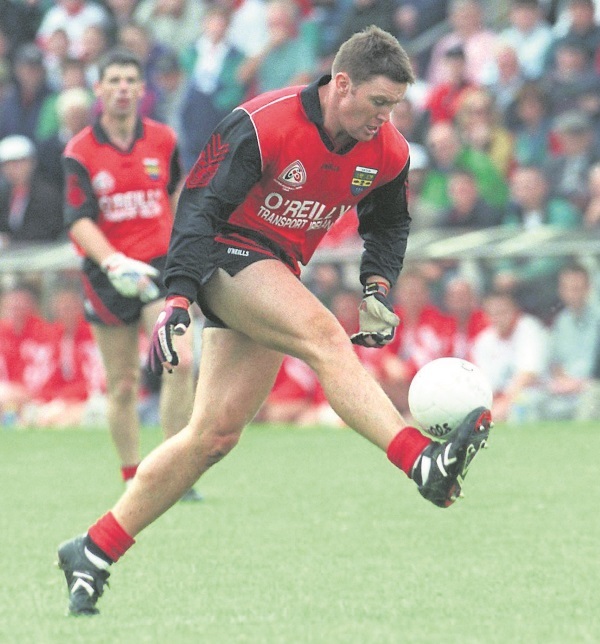 “There were things going on in the background that shouldn’t have been going on. Dundalk should have been bringing players in to strengthen; they knew the type of player that was needed having won leagues before. It was a club with serious history after all. It wasn’t as if winning the league was something new.

“Maybe the wrong people were in charge of certain things and surely the players that left shouldn’t have. They should have been adding to the club rather than taking away what they did.

“It was a case of one step forward and three steps back. The league champions went into the season with a depleted team; it wasn’t the ideal set-up, winning the league and then the following year you were struggling mid-table. Other clubs were adding and Dundalk were losing. That’s not how to build on success.”

Withnell’s stock was rising all the time, though. At various stages, Millwall and Motherwell showed a keen interest, only to be knocked back by the club, and Cliftonville, in their victorious Irish League season of 1997, also had a bid rejected. Dundalk’s caretaker boss, Tommy Connolly, branded their offer “a joke”.

Ronnie McFaul at Portadown and Derry City had links to the forward at differing intervals until finally cash-strapped and demotion-threatened Dundalk, now under legendary boss Jim McLaughlin for a second time, granted the attacker a move to Cliftonville in 1999.

“The set-up became unrecognisable,” he adds. “We’d a bunch of good kids - Dundalk through and through - but the team wasn’t strong enough and then getting rid of your so-called best players, it wasn’t going to help the club’s case. Then you’re falling into Division One and trying to build a team from there.

“I’d a lot of admiration for Dundalk and I didn’t want to leave - the reason I left was because things were going badly and they wanted to sell their best players to generate money. The year we got relegated, I got sold and Brian Byrne was sold.”

Nonetheless, he remains proud of his five seasons and 28 goals in 99 appearances. There have been visits back to Oriel for matches in recent years, with some supporters recognising him and approaching for a chat. It’s a pleasurable feeling and evidence of the esteem he’s held in.