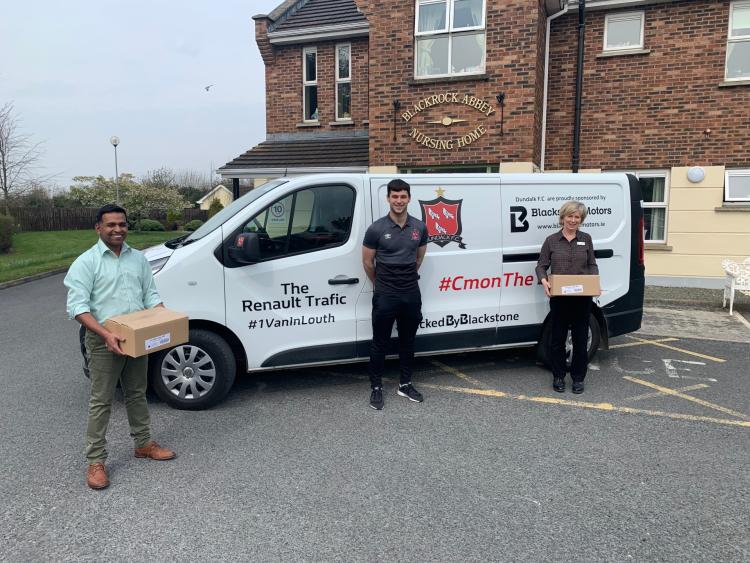 It’s been another very sobering week as the number of deaths and cases reported with the coronavirus pandemic continues to rise.

The health experts are confident that they are getting some control on this disaster with the strict restriction controls on movement we have all had to get used to over the past number of weeks.

The Irish public have played their part in the pandemic battle and have shown strict adherence to the controls. If there are any positives to be learned, the bravery of the public is one that shines out.

The nurses, doctors, carers, paramedics, ambulance crews, fire services, pharmacies, supermarkets and many other groups have been outstanding in the pandemic war. They are all heroes, as are many others, including the public, in this huge fight.

Dundalk FC have been showing the key role they are playing in the community. Striker Pat Hoban, kitman Noel Walsh and operations manager Martin Connolly were busy distributing PPE and healthcare equipment to four local nursing homes and to the frontline heroes working in the homes.

Following consultations with the HSE the proceeds from the club’s recent Go Fund Me page were used to acquire hand sanitiser from local pharmaceutical company Ovelle. The club were also able to purchase an Oxygen Concentration Machine for Dealgan Nursing Home to help them battle Covid-19.

#DundalkFC striker @PaHoban10 helped to distribute PPE and healthcare equipment to four nursing homes in the area as part of the club’s effort to help our ‘Frontline Heroes’ battling #COVID19.

The Go Fund Me page had a target of raising €1,500, but, in fact, the club raised €3,075 for their efforts. Apart from the Concentration Machine being donated to Dealgan, dozens of boxes of hand sanitisers were also distributed to St. Oliver Plunkett’s and Blackrock Abbey Nursing Homes.

It was a week that also saw Stephen Kenny’s unveiling as Republic of Ireland manager. Stephen did his press conference online, via Skype, with the country’s national media, while RTÉ sent a TV crew and Tony O’Donoghue to Kenny’s adopted home of Blackrock to carry out their inaugural interview with the new Irish boss.

Stephen is the first-ever Irish senior manager to be unveiled in Blackrock. It was a beautiful day in the village and with the interview being carried out in the back drop of the Cooley Mountains, it really was a fantastic setting.

The former Dundalk boss spoke about many things, including the style of play he wants to see Ireland use. No doubt it will be a similar style to the attractive, exciting football we have seen at Oriel for seven years now.

If Stephen can manage to get Ireland playing as he wants them, then I am very confident fans will be scrambling for tickets very soon to see the Boys in Green play at the Aviva.

On one final note, it’s just over 32 years since Dundalk played Derry City in one of the most dramatic league games to be played in Oriel. It was played against Derry City on the Easter Bank Holiday Monday, first week in April.

Dundalk were going for the title but had to win to stay in the race. They went 2-0 down to Jim McLaughlin’s men, who seemed primed to put the Oriel Park men to the sword. Dundalk were going nowhere with 15 minutes remaining. But, in dramatic, Lazarus style, Turlough O’Connor’s side came back from the dead to win the game, getting three goals in the final 13 minutes of the game.

The win set Dundalk up for an exciting league run-in with Brian Kerr’s St. Pat’s. The Lilywhites went on to knock Pat’s out of a two- legged FAI Cup semi-final, home and away. In the league decider, thousands crammed in to Oriel to see Dundalk seal the title. Pat Fenlon put Pat’s ahead and in the driving seat. But Dessie Gorman, who got the winning goal against Derry in that Easter thriller two weeks before, popped up to get the winner to bring the title back to Oriel for the first time since 1982.

Dundalk, indeed, went on to seal only their second league and FAI Cup double two weeks later when they beat Derry in the Cup final at Dalymount.

The game was completely the opposite to the thriller at Oriel three weeks earlier. Dundalk were awarded a very innocuous penalty in the first eight minutes when Larry Wyse was adjudged to have been fouled. John Cleary scored the penalty and with no other goals Dundalk sealed the double.

The reception the team got on their homecoming that night was like nothing I have ever seen. It took the team bus over three hours to get to the square such was the happiness.

People, young and old, cried and laughed as yet another Dundalk team brought so much happiness to their town.

On a final note, please stay safe this coming week. With the virus so alive, please follow all government guidelines and think of our brave frontline staff who are all looking after us.