16 players you may have forgotten played for Dundalk FC 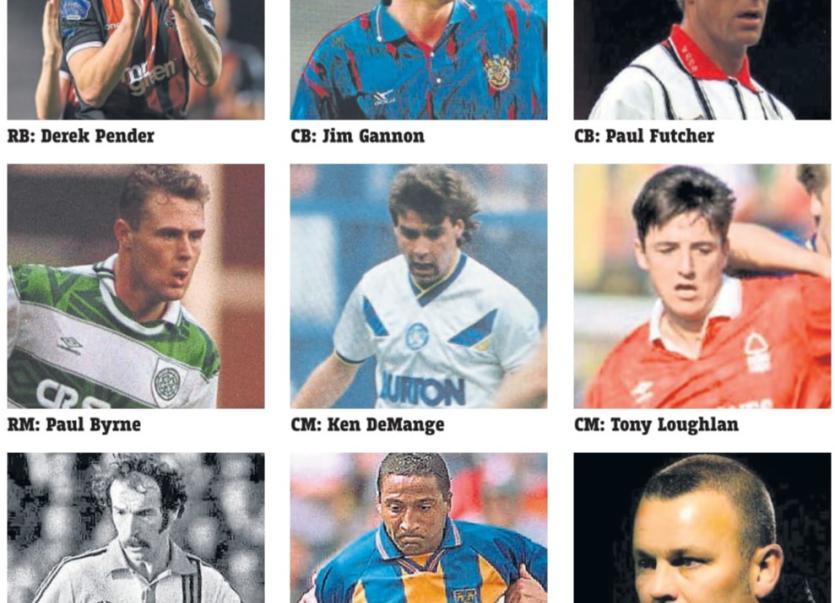 Niall Newberry picks a starting XI and subs of lads you more than likely didn’t know played for The Lilywhites.

Niall Newberry picks a starting XI and subs of lads you more than likely didn’t know played for The Lilywhites.

GK: Brendan Murphy
The former Wimbledon goalkeeper was restricted to just one Intertoto Cup appearance, in 1995, during his time with the Crazy Gang. He did provide adequate cover to Neil Sullivan for much of the 1996/’97 campaign, though – a period in which he was called up to the full Republic of Ireland squad. Murphy eventually returned closer to home and signed for Dundalk, but made just five First Division appearances, before returning to England with Kidderminster Harriers in 2000. Ten years later, the same Brendan Murphy kept goal for Meath in ‘that’ Leinster GAA final against Louth at Croke Park.

RB: Derek Pender
Pender retired at the end of the 2019 season as a Bohemians club legend, and rightfully so, having spent the last eight years of his career with the Dublin outfit. Prior to that, he had spells with St. Patrick’s Athletic, Bray Wanderers, Shamrock Rovers, Dublin City and Shelbourne. A lesser known fact about Pender is that he made his League of Ireland debut with Dundalk in 2004, while on-loan from Shels, and he played nine times for a team that ultimately finished sixth in the First Division.

CB: Jim Gannon
Next up, the man that brought Pender to Oriel Park. Of course, Gannon managed Dundalk between 2004 and 2005, but what about his playing spell at the club? It didn’t last long, but not because, like many of the other players on this list, he was in the twilight of his career. It was more down to the fact that he was an excellent, young centre-half, who impressed throughout 1988/’89. That form ultimately earned him a move to England with Sheffield United. He thereafter spent a decade at Stockport County and is currently in his third stint as manager of the club for which he played 479 matches. It’s easy to forget that it all started at Dundalk for the man born in London.

CB: Paul Futcher
Was the most expensive defender in England when he signed for Manchester City from Luton Town in 1978. Following his spell at City, whom he joined for a then club-record fee of £350,000, the former England U21 international also represented Oldham Athletic, Derby County and Barnsley. After spending a few seasons with Grimsby Town, he rocked up at Dundalk in 1995. Although he never actually made a league appearance for Dermot Keely’s side, he did play in both legs of the UEFA Cup tie against Malmo and also featured in two League Cup matches. He sadly died in 2016. 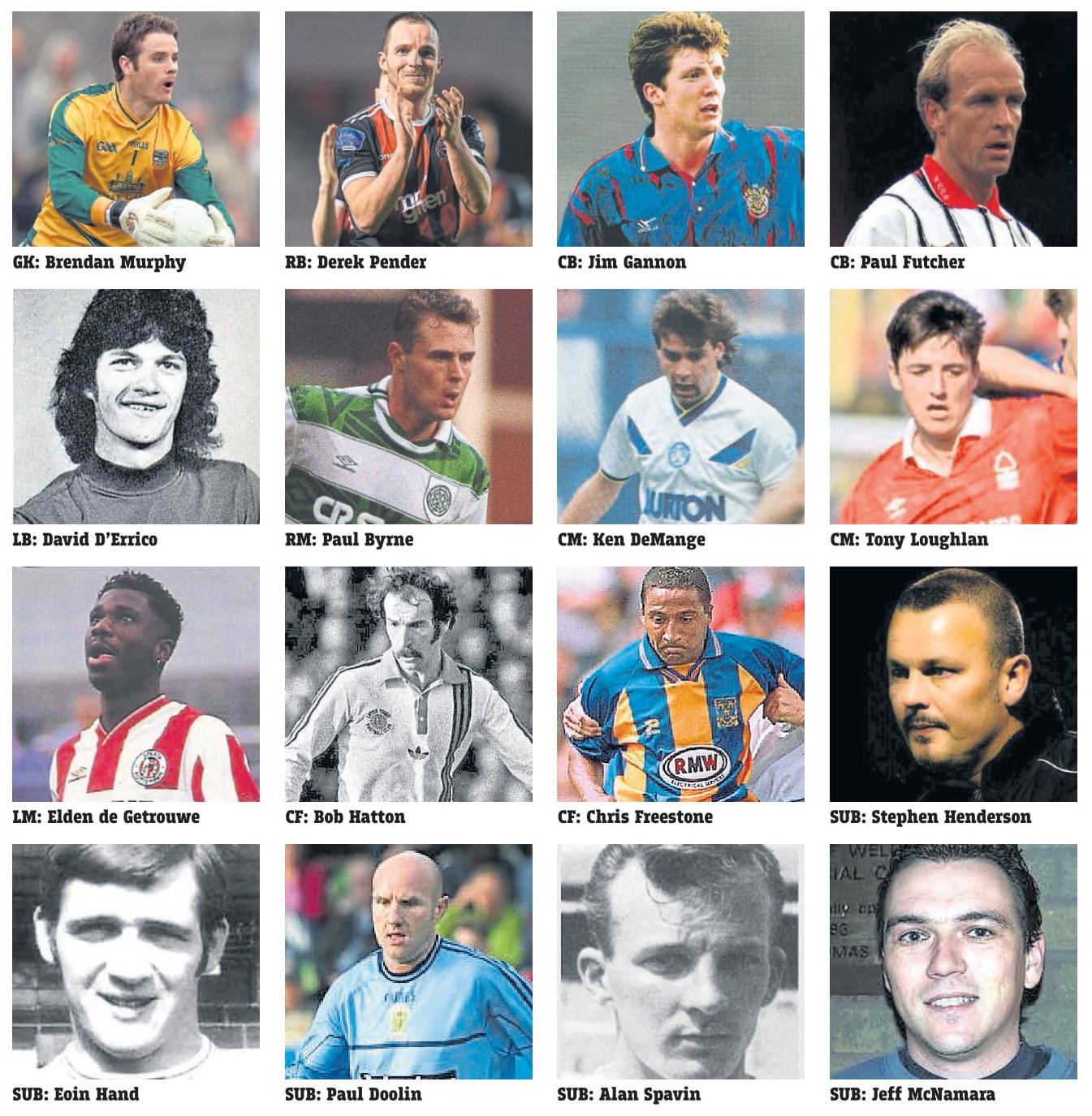 LB: David D’Errico
The United States international – along with fellow American Bobby Smith – moved to Dundalk for a brief time in 1974. A wing-back, D’Errico played four times in the League of Ireland before heading back home, where he enjoyed a distinguished career in the North American Soccer League (NASL).

RM: Paul Byrne
The father of Kurtis Byrne, who also lined out with Dundalk between 2013 and 2015. Paul Byrne enjoyed a decent spell in Scotland with Celtic, before joining Southend United in England. The Dubliner returned home in 1998 and played for Shelbourne, Bohemians and St. Patrick’s Athletic. The man who once scored in an Old Firm derby arrived at Dundalk in 2003. However, he played just nine league matches, scoring twice, as The Lilywhites finished a shameful 10th in the First Division.

CM: Ken DeMange
DeMange won two full caps for the Republic of Ireland between 1987 and 1988. He joined Liverpool from Home Farm in 1983, before also spending time with Leeds United, Hull City and Cardiff City. Following spells with Limerick and Bohemians, he signed for Dundalk in 1994. He scored three times in 13 games as Dundalk, in extraordinary circumstances, won the League Championship in 1994/’95.

CM: Tony Loughlan
Another squad player from that victorious 1994/’95 campaign, Loughlan played two games less than DeMange, without finding the net. Prior to his stint with Dundalk, he played a couple of top-flight matches in England (scoring on his debut) under the great Brian Clough at Nottingham Forest, but persistent injury problems curtailed his progress, causing him to be released by the club in 1993. Having worked alongside his former Forest team-mate, Roy Keane, at both Sunderland and Ipswich Town, Loughlan is currently serving as first-team coach with English Premier League side Burnley.

LM: Elden de Getrouwe
Of a slightly more exotic background than most of the players on this list, the Dutchman arrived at Oriel Park in 1994 with quite the reputation, having had a decent time in the Eredivisie, where, as a midfield player, he scored 10 goals in 58 games for Sparta Rotterdam. Unfortunately, de Getrouwe never really lived up to the hype, and left the club having scored once in just three league outings. He returned home with Eindhoven FC, before finishing up in the lower echelons of Belgian football.

CF: Bob Hatton
The Englishman played over 600 times in the Football League for a variety of different teams, scoring at a rate of more than one goal in every third match he played. He enjoyed the best period of his career at Birmingham City, where he regularly featured in the top-flight between 1971 and 1976. In 1984, he joined Dundalk, who were then player-managed by former Chelsea stalwart and Republic of Ireland international John Dempsey. Hatton never played in the league for The Lilywhites, but did make one appearance in the FAI Cup – against Shelbourne, who knocked Dundalk out that February.

CF: Chris Freestone
We finish with perhaps the most obscure member of this elite list. Freestone scored on his English Premier League debut for Middlesbrough in 1996. However, he had amassed just 13 competitive appearances by the time he left the club a year later. Spells in the lower divisions with Northampton Town, Hartlepool United and Shrewsbury Town followed, prior to him ending up at Dundalk in 2002. He made one appearance for Trevor Anderson’s strugglers – in the now defunct First Division Cup.