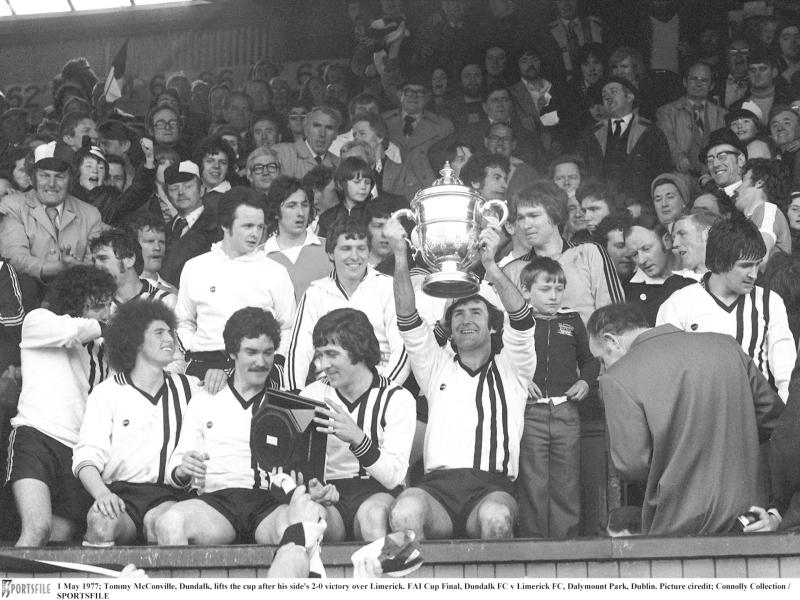 There was a time when St Patrick’s Day was big for sport. The Cheltenham Festival nearly always coincided with our national holiday – and sometimes still does – and if there happened to be an Irish winner of one of the bigger races that day, well, the shamrock would get an awful drenching, Guinness and Jameson and, if it was on sale, which I doubt, Macardles Ale and Killanny Blond, the travellers’ beverages of choice.

Back home, Dalymount Park would play host to a meeting of sides representing League of Ireland and Irish League sides. Tommy McConville, Joe Ralph, Joey Donnelly, Billy O’Neill, Jim Hearty, Peter Corr, and Patsy McKeown are Dundalk-born players who featured regularly in this fixture before the series ended in the mid-1980s.

Also on the northside of the Liffey, there’d be the Railway Cup finals at Croke Park, football and hurling.

That wouldn’t be it. If Patrick wasn’t being celebrated on a Sunday, Baldoyle racecourse would open the Irish Flat season, and, while I might be wrong about this one, rugby’s schools’ final – the Leinster version – would be played at Lansdowne Road, the mother of the winning captain there to present the trophy.

The Railway Cup competitions lasted much longer than football’s All-Ireland ‘B’ Championship or the Murphy Cup, and when they were at their height, finals day would attract upwards on 40,000. Contested by the four provinces, they were introduced in 1927.

I was at a few of the finals as part of Dundalk CBS school outings, back in the 1950s. But for that, myself and, most likely, my football team colleagues would never have had the opportunity to see the great hurlers, Christy Ring, the Rackards, Jim Langton, and Tony Reddan, to mention but a few. Those were the days of the big crowds.

The growing popularity of the club championships – first played at the beginning of the 1970s – took its toll on the inter-pros. And as interest in them began to wane, several initiatives were introduced to try to regain the public’s support. None worked, and after some finals had been watched by fewer people than you’d see at a club junior match, the competitions weren’t even included on the 2017 schedule, and haven’t appeared in any since.

Louth has had a number footballers in the green of Leinster, medal-winners among them. Here are some facts relating to this county’s representatives:

George Comerford, later to win a championship with Dundalk Gaels in 1945, played with Munster in ’32, representing his native Clare, and with Leinster three years later, this time as a Dublin player.

Eddie Boyle, Eugene Callan and Jimmy Coyle were on the winning 1939 team and Paddy Cluskey was a sub. By then, Boyle had a medal to his credit, and he would win another four, making him the most successful of the county’s inter-pros. The great Cooley Kickhams and Dublin Sean McDermott’s full-back was in the No3 jersey for 13 years.

Louth had its highest-ever representation on a winning team in 1945 – Boyle, Paddy Larkin, Jim Quigley, Jimmy Thornton and Ollie Halpin. Tommy Clarke was a sub.

Had Galway–born Frankie Stockwell not been injured for the 1950 semi-final with Munster, he’d have done a ‘George Comerford’ lining out with two different provinces.

Stephen White won four medals on the trot, 1952 to ’55. His brother-in-law, Jimmy McDonnell, was on three of the winning sides, and Jimmy Tuft, Tom Conlon and Hubert Reynolds on one of them. White’s son, Stefan, was a regular during the 1990s.

Seán Og Flood was a winner in 1959, and on his transfer to Cavan was unlucky not to have featured on an Ulster side, injury ruling him out after he’d been selected to play in goals.

Frank Lynch won the first of his two medals in 1961, playing alongside Kevin Beahan in the final.

Danny Nugent and Benny Gaughran featured on the winning team in 1974.

Gerry Farrell was on the panel five years running, 1983 to ’86, winning two medals.

Leinster’s first winning team in eight years, the 1996 outfit, had Seamus O’Hanlon on the right wing and Colin Kelly in the corner. Both would add to their collection the following year, this time with John Donaldson and Gareth O’Neill as colleagues.

Paddy Keenan was still a teenager when he made his debut in 2004, and was involved for two subsequent campaigns, once with Neil Gallagher as a colleague and on the other occasion with Dessie Finnegan.