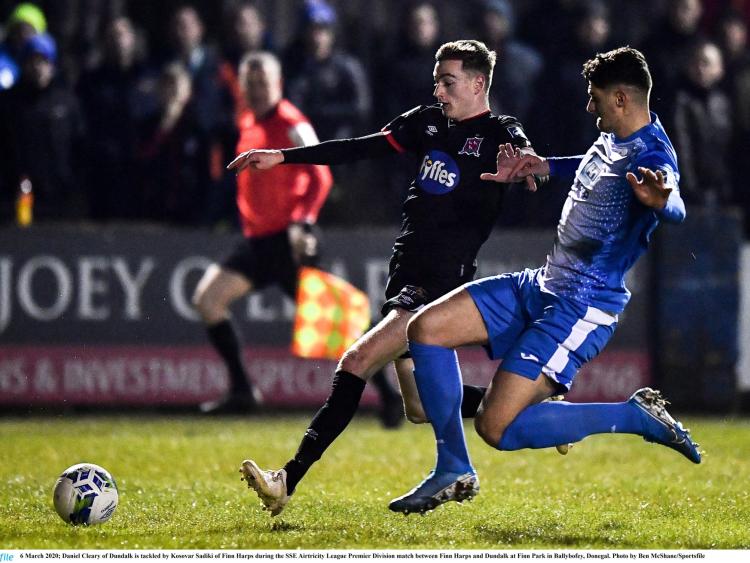 Dundalk FC got back to winning ways in the SSE Airtricity League Premier Division courtesy of Friday night’s very comfortable 4-0 win over Finn Harps in Ballybofey.

A goal in either half from Patrick Hoban, coupled with Michael Duffy and Greg Sloggett efforts saw The Lilywhites cruise to yet another win at Finn Park, a ground that has, in the past, been a very happy hunting ground for them, with their last defeat at the Donegal venue coming 13 years ago.

Dundalk made two changes from their disappointing loss to Shamrock Rovers at Tallaght Stadium.

Jordan Flores, who scored a sensational goal in that particular match, dropped to the substitutes’ bench in place in of Daniel Kelly, while Daniel Cleary replaced Andy Boyle in the Dundalk back four.

Harps, who were unchanged, fell behind inside the first three minutes of this encounter when Duffy teed up Hoban, who, with the aid of a deflection, fired a shot from outside the box past goalkeeper Michael McGinley to score in his fourth successive SSE Airtricity League appearance. 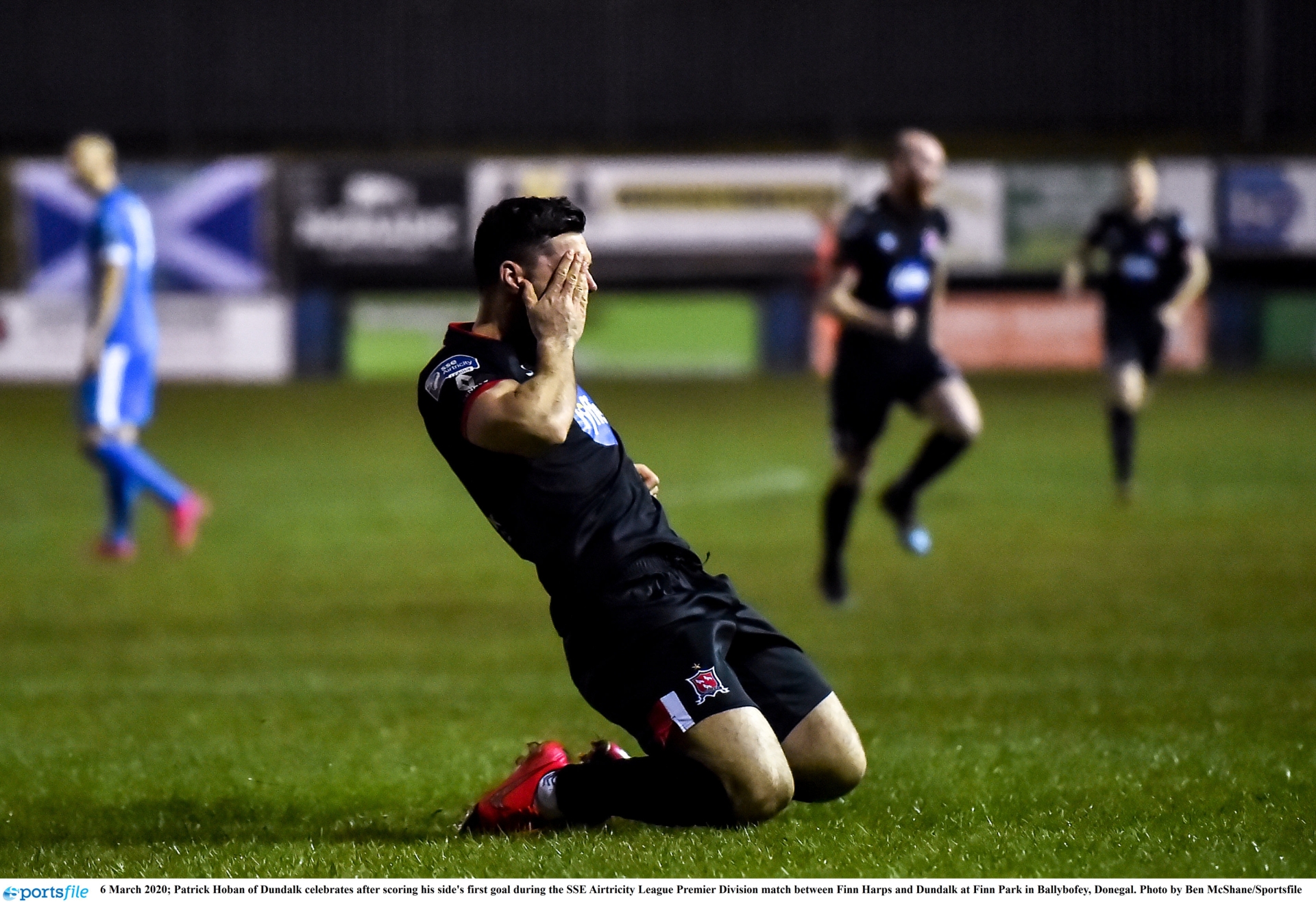 The battling hosts responded reasonably well to that early concession, however, with Mark Russell, operating as a wing-back, showing some excellent footwork out on the left before curling an effort that had to be brilliantly tipped over the top by the outstretched arm of the veteran Gary Rogers.

Rather predictably, though, Dundalk doubled their advantage on 37 minutes when Hoban released Duffy, who, one-on-one with McGinley, squared it to Daniel Kelly, who somehow hit the crossbar.

Unfortunately for Harps, the resulting rebound fell into the path of Duffy and he finished with ease.

The second started much like the first and Dundalk came close to a third seconds after the restart when Duffy played in Daniel Kelly on the right, with his shot forcing a decent save out of McGinley.

Vinny Perth’s side did make it three on 51 minutes, however, when Dane Massey’s first-time volley, from what was an exquisite Daniel Cleary ball, was saved by McGinley, only for Hoban to turn home from the rebound to bag his second of the night, with Dundalk now coasting to another three points. 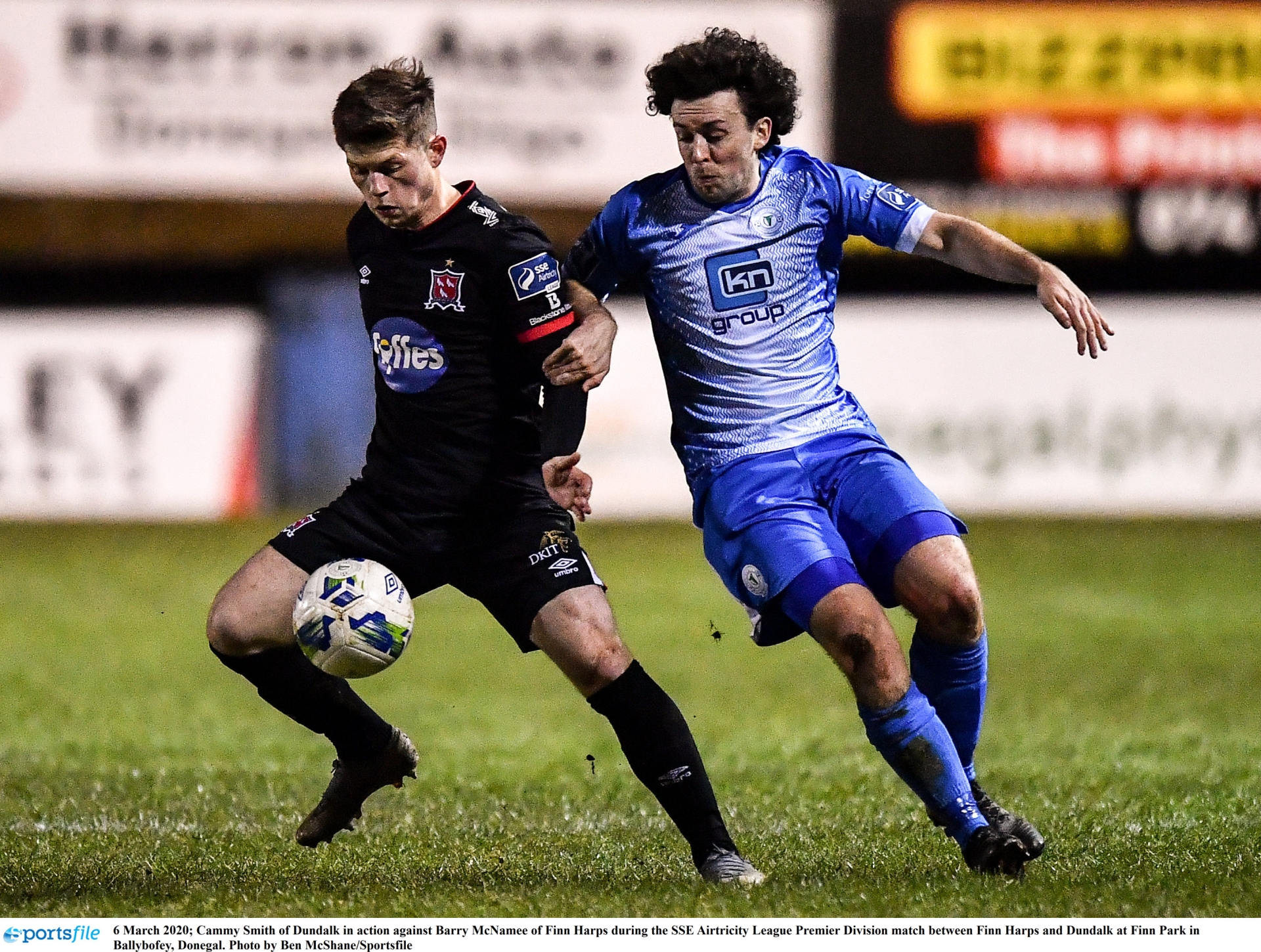 Harps almost grabbed a consolation when, from Barry McNamee’s corner, Kosovar Sadiki saw a header saved by Rogers before Alexander Kogler’s effort was cleared off the line by Seán Gannon.

Dundalk made it 4-0 seven minutes from time after Harps failed to clear Duffy’s cross, allowing Sloggett to score a very first goal for his new club, while Stefan Colovic, making his long-awaited debut, hit the post late on.